Changes proposed for the Victims of Crime Act would result in less funding for Bow Valley Victim Services if approved by the UCP government
Jun 30, 2020 6:29 AM By: Tanya Foubert 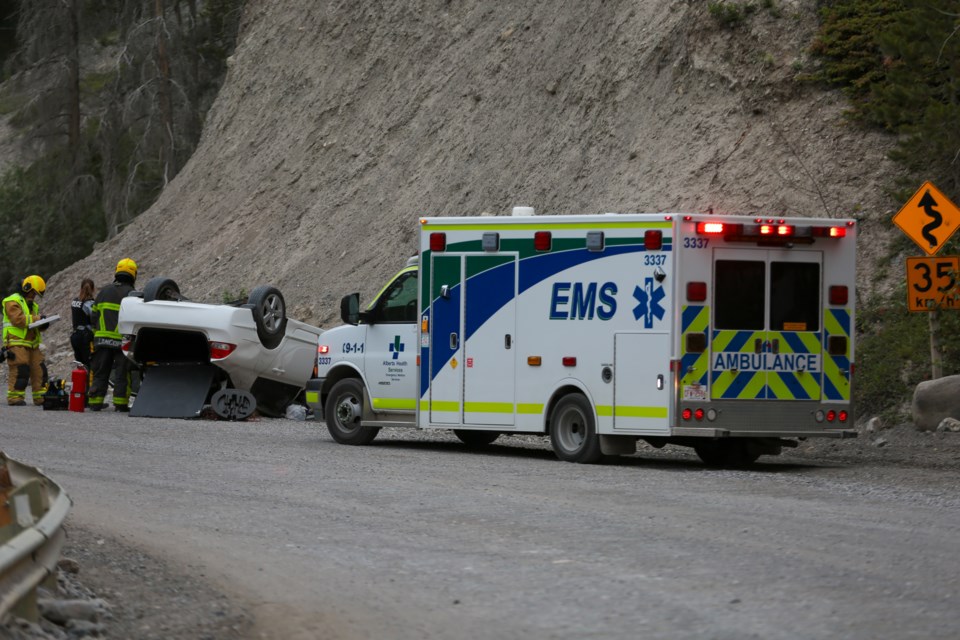 Emergency services crews attend to the scene of a single vehicle roll over along the Highway 742 near the Goat Creek trailhead on Saturday (June 27). Bow Valley Victim Services provides supports to anyone who experiences trauma in the region. That includes car crashes, domestic violence, sexual assault and sudden death. EVAN BUHLER RMO PHOTO⁠

BOW VALLEY – Recent changes to how victim services in Alberta are funded has the local Bow Valley organizations group expecting a possible cut to its annual budget.

Bow Valley Victim Services (BVVS) executive director Peter Quinn said over 27 years of offering supports to victims of crime in this region, the most important thing clients need is someone to talk to.

"The thing people are telling us is when they go through a traumatic event, or they are the victim of a crime, the number one thing they want is somebody to talk to," Quinn recently told Canmore council at its June committee of the whole meeting. "If people want somebody to talk to, that means they want us to shut up and listen and if we listen we can start to find options for them."

BVVS regularly connects its clients to supports available in the community like: emotional support, practical assistance and information. A recent survey of those who have used its services has shown the local organization is on the "right track," said Quinn.

"Over the last two or three years, the number of calls we have been involved with have been fairly consistent and the trend is fairly similar," Quinn said. "The biggest thing we are dealing with, particularly in Canmore, is domestic violence."

A look at the last 10 years, however, shows the number of clients helped by BVVS has nearly doubled, however staffing and resources have remained unchanged in that time. BVVS has three staff: two 0.8 full-time equivalent (FTE) positions, which includes Quinn, and one 0.4 FTE.

It operates out of the Banff RCMP detachment with a small office space, although Quinn noted only one person is in the office at a time presently due to COVID-19 restrictions around social distancing.

"As many of you are aware, the world has changed a lot in the last three months," Quinn said, adding BVVS is no longer meeting its clients in person as a result. "People are OK with that and we found they would be uncomfortable meeting face-to-face."

Quinn, who provides an update to each council annually, said looking at the current trends when it comes to fundraising – something BVVS relies on to continue to provide the level of service it currently does – present some challenges moving forward.

"Over the last couple of years there has been a decrease in donations to our program – not a lot, but a bit of a decrease," he said, adding without the ability for groups to hold fundraising events currently, it is expected to become a bigger challenge next year. "A lot of those events and donations will not be happening simply because people will not be in a position to provide that financial support and we appreciate that completely."

The provincial government increased its collection of a victim fine surcharge in the courts on all fines levied to 20 per cent from 15 per cent earlier this year. That fund provides 50 per cent of the annual operating budget for BVVS. That equals $131,250 for the 2020-21 fiscal year, which is the same amount received from the province for the two previous years.

Quinn says over the past 10 years, he has requested an increase, but it has not kept pace with the growth and the demand for services over that time. Under the legislation, he said BVVS could be eligible for up to $150,000 in funding, however that may change soon.

"We get a lot of our funds from the Victims of Crime Act and the justice minister is looking to change that," Quinn said. "That could result in a decrease in funding for us as well."

At the end of May, Minister of Justice and Solicitor General Doug Schweitzer announced the proposed changes to the act, which were approved last week. Bill 16 opens up the Victims of Crime Fund to be used by the provincial government for public safety and policing initiatives. That includes using the funds for the Alberta Law Enforcement Response Teams, the Rural Alberta Provincial Integrated Defence Force, drug treatment courts and to hire more Crown prosecutors.

The government also established a working group, co-chaired by two UCP MLAs from Grande Prairie and Airdrie, to review the financial benefits program and look at creating a new victims assistance model to launch in 2021.

Quinn, however, expressed concerns because Schweitzer indicated in a conference call with him that it would result in a $1 million reduction in funding overall for victims service groups throughout Alberta.

"We are pushing to get more funds from them and they have indicated they will [be providing] less," he said. "It was nice to be able to speak [to the minister] directly about the value of the work we do and hopefully influence his decision moving forward."

Jonah Mozeson, press secretary for Minister Schweitzer, was asked to confirm the estimated reduction in funds for victim services organizations. He provided a statement to the Outlook, however did not answer the question directly.

Mozeson said in an email that victims want more timely, direct assistance as "the actual victims of crime."

"We are also taking a larger view of victimization in general, not only providing these supports victims have asked for in the timely manner they need it, but enlarging the Victims Services Fund by 50 per cent from $40 million to $60 [million] to help prevent law-abiding Albertans from being victimized and ensuring the criminals that do so are brought to justice," Mozeson wrote. "Increasing the Victims Services Fund and enlarging its scope is not an either/or debate; it is about more for victims and preventing Albertans from being victimized."

It is not clear at this time what the actual effect of the change will be for BVVS and other victim services agencies across the province, however locally it is expected there will be less funding from the province to support victims in the community next year. There are between 70 to 75 victim service organizations that serve 130 communities across Alberta.

In 2018-19, the government of Alberta provided $22.5 million to victim service organizations.

As for the need to improve the system, Quinn said Alberta is often looked to as setting the standard for victim of crime supports in Canada. It is volunteer based, operates 24 hours a day, seven days a week in all regions of the province.