For more than two years, local organizers have been lobbying the provincial government to reinvest in the aging facility, or risk losing international sporting events that generate millions of dollars of economic activity in the Bow Valley.
0
Jul 11, 2019 2:00 PM By: Paul Clarke 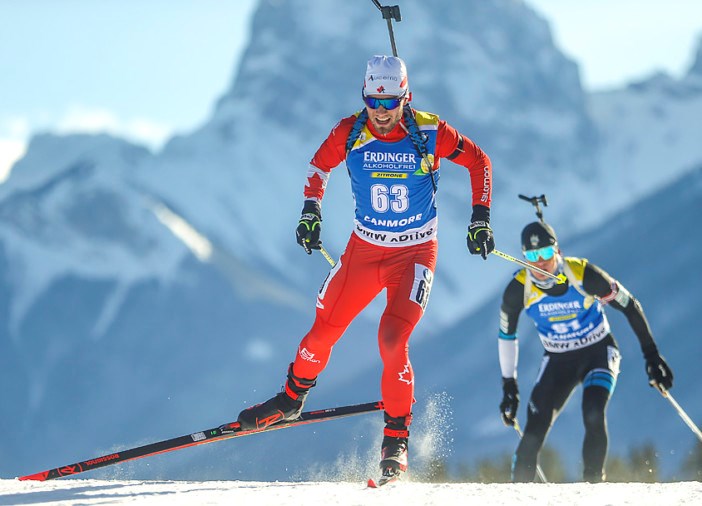 Christian Gow races in the first ever men's short individual race at the Biathlon World Cup at the Canmore Nordic Centre in February. It could be the last World Cup event held at the Nordic Centre for the foreseeable future. Aryn Toombs RMO Photo.

CANMORE – The Canmore Nordic Centre will no longer be able to host world cup or world championship biathlon events after the province missed a deadline to upgrade the facility.

For more than two years, local organizers have been lobbying the provincial government to reinvest in the aging facility, or risk losing international sporting events that generate millions of dollars of economic activity in the Bow Valley.

It appears that risk has now become reality, after the provincial government postponed making any financial decisions until its blue ribbon panel reviews the province’s finances. The report is expected to be published by Aug. 15.

Ken Davies, chair of the Alberta Event Hosting Society for Biathlon, said he was disappointed by the government’s indecision.

“I’m disappointed that we weren’t able to get a commitment by our end of May deadline, but I understand they have to run the business of government and that’s bigger than the investment in the Nordic Centre,” said Davies.

As a result, he said it will likely be three or four years until the Nordic Centre can host another world cup or world championship biathlon event and even that timeline, he admitted, was optimistic.

“We’re going to have to work hard,” said Davies, who will be travelling on his own dime to Austria in September to try and convince the International Biathlon Union (IBU) to reconsider its decision.

The Canmore Nordic Centre Provincial Park is outside Canmore’s Town limits and falls under the responsibility of the provincial government. An interview request to the minister of environment and parks was not returned, however Davies said the minister is aware of the situation.

According to Davies, hosting a world cup event is extremely competitive with 45 venues around the world competing to host the races every year.

In order to host a world cup or world championship biathlon event, each venue must maintain an A-licence from the IBU, however the current facilities at the Nordic Centre, which were built for the 1988 Winter Olympics, are outdated and fall short of the requirements.

“By the letter of the biathlon rule book our skating is not wide enough, but because we have such an incredible facility in other ways, like the quality of our snow, the quality of our trails, the scenery and the ability of our hosting organization in Canmore to host these events, they give us a pass,” said Davies.

It appears that leniency is now over, after the Nordic Centre was not included in the IBU’s next three-year calendar of events.

Davies blamed political pressure from other venues for being left off the calendar, however the IBU has assured him that if the provincial government commits to upgrading the facility, it will reconsider its decision.

“The IBU knows us well enough to say they could make an exception as long as they know we’re moving ahead, but they won’t do that right now,” said Davies, adding even a long-term commitment from the government would likely be enough to satisfy the IBU’s concerns.

A recent feasibility study identified the facility needs $10 million worth of upgrades, including a new biathlon building, expanded biathlon stadium and renovations to the range.

The study also identified the need for a viewing deck to be attached to the day lodge, revamping the air handling system in the wax room building and expanding Frozen Thunder by tripling the amount of snow stored over the summer to open six to seven kilometres of ski trails in October every year.

The $10 million project was included in the provincial government’s capital priority list for the past two years, however at this point in time it remains unfunded.

The IBU declined to go into detail about the issue, however it previously said the Nordic Centre’s A-licence was valid until October 2019 and a technical committee would decide whether to renew it after evaluating the facility.

“The IBU is in the process of evaluating the prolongation of the A-licence and we are not commenting on such ongoing processes,” wrote Christian Winkler, IBU communications director.

Davies said his organization recently submitted its plans to the IBU to upgrade the facility, however until there is a funding commitment from the government the Nordic Centre’s licence won’t be renewed and with it its ability to host world cup and world championship biathlon events.