“The subject was nipped on the back of the calf and bear spray was deployed. The bear reacted to that and basically went back away.”
Oct 15, 2019 3:45 PM By: Cathy Ellis 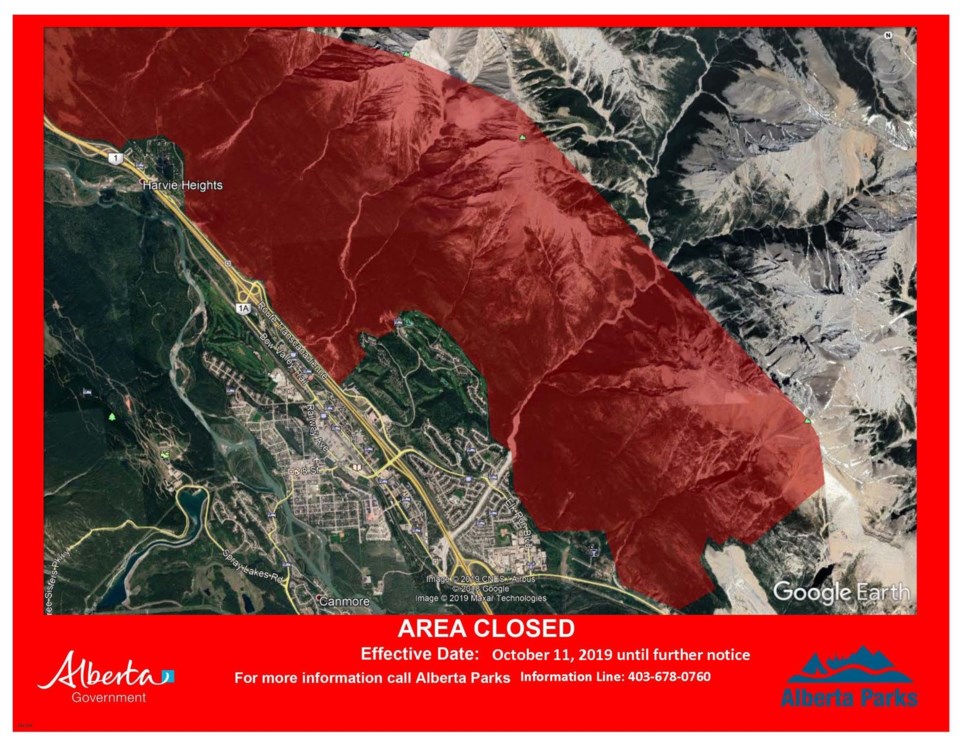 Alberta Parks issued a closure for a large part of the Bow Valley near Canmore after a hiker with an off-leash dog had an encounter with a grizzly sow defending her cubs on Oct. 10. AEP PHOTO

CANMORE – A hiker with an off-leash dog was injured in a defensive attack by a mamma grizzly bear last week, forcing a massive closure on the north side of the Bow Valley to protect people and wildlife.

Wildlife officials with Alberta Parks say the hiker encountered the grizzly sow and her cubs at “close proximity” on the Horseshoe trail system on the front slopes of Grotto Mountain in Bow Valley Wildland Provincial Park about 5:30 p.m. on Thursday (Oct. 10).

Andy Rees, district conservation officer with Bow Valley Provincial Park, said one of the dogs was off-leash and in front of the hiker, but was followed back to the owner by a grizzly bear protecting her cubs.

“The subject was nipped on the back of the calf and bear spray was deployed,” said Rees, noting the sex of the hiker is not being disclosed. “The bear reacted to that and basically went back away.”

Rees said he believes the hiker sought medical attention, but had no further details.

“The hiker was able to walk out after the incident … but was shaken, yes,” he said.

“To come face to face with a grizzly bear is going to be a little traumatizing.”

It is illegal to have dogs off leash in Alberta’s protected parks.

“We’re continuing our investigation and we’re looking at the possibility of charges,” said Rees.

“When you’re in the park system it’s mandatory for dogs to be on leash at all times. It’s legislated, but it’s just good behaviour too if you’re anywhere in bear country,” he added.

“With these sorts of surprise encounters with bears, a dog that is on leash and under control, it seems to be a lot better for the subject and the wildlife.”

Alberta Parks closed an area surrounding Cougar Creek from the Burnco pit area to Harvie Heights Oct. 11 until further notice. The closure will be reviewed towards the end of the week.

Rees said there are no plans to trap or relocate the bear at this time, noting the closure is in place to protect people and to give the mamma bear and her cubs some security and space to move.

“This appears to be more of a chance encounter and a defensive attack between a sow grizzly bear and a hiker,” he said.

“Basically, the cubs were with the mamma bear. She kind of sent the cubs on their way and then she basically reacted to the situation that she was in.”

Alberta Parks doesn’t have any information on this grizzly bear at this time, or if it is the same mamma bear involved in a serious encounter with a runner on the south side of the valley in July of this year.

In that case, Olympic biathlete Emma Lunder believes deploying bear spray saved her life, or prevented serious injury, when a mamma grizzly defending her two cubs throttled toward her from 50 metres away.

“We don’t know what bear this is. There was a report a bear may have had an ear tag, though we’re not sure what number it is,” said Rees, adding that telemetry didn’t pick up any bears in the area.

“When we investigated up at the scene, we were able to gather some samples, so we’re going to be sending those away for DNA analysis to see if we can figure out which bear it is.”

With a cold and snowy fall, Rees said many people may think bears have already gone into hibernation – but that’s not the case.

“The bears are still out there actively feeding and trying to fatten up for winter,” he said.

“Whenever people are out and about, they need to be aware of the potential of running into bears and being aware of the situation around them.”

To avoid a surprise encounter with a bear, Alberta Parks advises: to make plenty of noise and travel in groups; be aware of your surroundings by looking and listening for bears and their signs; keep your pets on a leash and carry bear spray

“Make sure you know how to use your bear spray and that it’s very accessible,” said Rees.

“Having bear spray and knowing how to use it is of utmost importance when you are hiking in bear country."