The owner of a lot on the corner of MacDonald Place and Three Sisters Drive in Canmore would like to rezone the property from R1 to R2, which would allow a duplex to be built instead of a single detached dwelling
Jul 15, 2020 6:37 AM By: Tanya Foubert 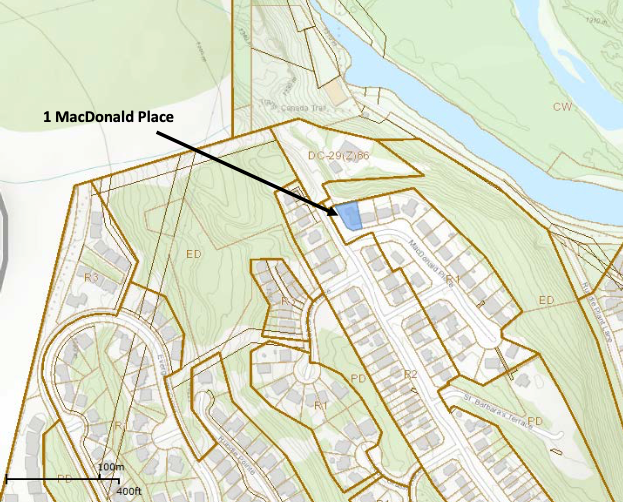 The owner of a single detached dwelling at 1 MacDonald Place has made an application to the Town of Canmore to rezone it to allow for a duplex to be developed. SUBMITTED IAMGE

CANMORE –  Canmore council has set a public hearing to consider a request to rezone a lot on MacDonald Place to allow for a duplex to be developed.

Council passed first reading of the bylaw amendment to the Land Use Bylaw at its July 7 meeting and set a public hearing on Aug. 18 at 9 a.m. for feedback on the proposal to change the current single detached dwelling zoning for 1 MacDonald Place, in an area that is commonly referred to as Hospital Hill by locals.

Development planner Tracy Woitenko said typically administration does not support applications to rezone individual lots within land use districts, but this particular property is also located along Three Sisters Drive, which permits duplexes to be built.

"In this case, the proposed amendment would bring the subject site to [be in line with] uses permissible on the surrounding lots and supports a continuous streetscape," Woitenko said. "We do support the change."

MacDonald Place is currently zoned in the Land Use Bylaw for single detached dwellings, while Three Sisters Drive permits duplexes to be built.

Woitenko said while the lot under consideration has an address on MacDonald Place, a municipal garbage bin is located in front of the home along that roadway. Access to the property's front door and driveway are from Three Sisters Drive. She said that if this rezoning is successful, administration would look at creating a new civic address along Three Sisters Drive for the property at subdivision.

Woitenko pointed to the updated Municipal Development Plan that allows for infill development in existing areas where it fits into the context of the neighbourhood, nearby amenities and services are available and it contributes to the supply of market or affordable housing.

She said a duplex would have a lower price than a single detached dwelling. However, it should be noted that several duplexes along Three Sisters Drive have been built and sold in the $1 million-plus range over the past several years.

"It will be interesting ... to hear from the immediate neighbourhood [about this change]," said Mayor John Borrowman.