“There’s a very clear understanding for people who work in the food sector, but folks who aren’t so familiar with some of the issues surrounding food in the Bow valley, I don’t think they necessarily see some of those issues if they’re not impacted by them or working in the field on a regular basis."
Jul 20, 2021 8:30 AM By: Greg Colgan 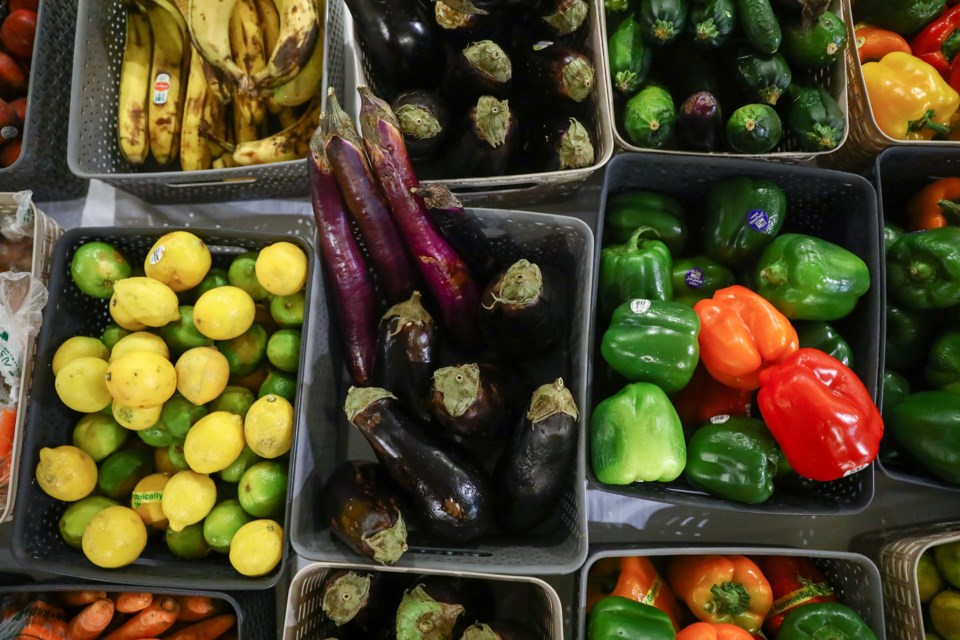 A table full of vegetables and fruit collected from local grocery stores for the Banff Food Rescue on Friday (Feb. 26).The volunteer-driven organization's goal is to provide food security in the Bow Valley by keeping good food from becoming food waste. Due to COVID-19 restrictions, volunteers now prepare bags of food to hand out at evening distributions on Mondays, Wednesdays and Fridays. Participants are encouraged to donate $5 for a bag of food. EVAN BUHLER RMO PHOTO

BOW VALLEY – A pair of research reports has identified strengths and areas of weakness when it comes to food security in two Bow Valley municipalities.

The Bow Valley Food Alliance (BVFA) released reports on the Town of Canmore and the MD of Bighorn, which identify the strengths and food issues in both municipalities. The papers also outline a series of recommendations that could potentially aid those communities.

The reports are aimed at better informing people in the municipalities on food issues, with a focus on strengthening regional relationships for municipalities, looking at the food system as a whole chain and continuing to expand on the work being done.

“There’s a very clear understanding for people who work in the food sector, but folks who aren’t so familiar with some of the issues surrounding food in the Bow Valley, I don’t think they necessarily see some of those issues if they’re not impacted by them or working in the field on a regular basis,” said Lauren Kepkiewicz, the researcher for both reports.

“In some ways it contracts with the image a lot of people have with the Bow Valley where there’s a lot of wealth and natural beauty. People don’t think about food insecurity when they think of the valley, but it’s here.”

A similar pilot report was completed for Banff in 2018-19, outlining concerns and strengths and potential ways to improve food security issues.

Kepkiewicz, a board director with the BVFA, completed the work as part of her postdoctoral research at the University of Calgary’s geography department. The reports used a mixture of interviews with people with in-depth knowledge on food issues and a survey to capture a wide variety of perspectives.

“These reports are a way to formally understand and think about some of the key issues, strengths and changes people want to see in relation to food in the Bow Valley,” she said.

The paper on the MD of Bighorn included 20 interviewees from food producers, educators and business owners between the fall 2019 to spring 2020.

The paper made 10 recommendations to help improve food security in the MD of Bighorn, which included increasing the availability to local food, help with food affordability and challenge the inequalities of existing food systems.

For Canmore, the 22-page paper listed 10 strengths in the community such as community gardens, cultural food groups and community meals. There were also 10 challenges in affordability, social injustice and disparities and the lack of influence over food systems needed to improve.

A series of 11 recommendations was made. Among those were supporting diverse cultural food systems, develop and advocate for ecologically regenerative food systems and increase support for community food programs.

The Canmore research had nine participants and a further 18 people interviewed.

The methodology in interviewing people was established using the University of Calgary ethical guidelines, Kepkiewicz said.

An anonymous survey also had 259 respondents from the valley.

“People often think about access to food, which is really important,” Kepkiewicz said. “The research underlines the need to think about food productions with transportation, processing, distribution and how we dispose of food. For me, that means if we’re interested in building sustainable and equitable food systems, we need to address all of those things that happen within the whole food system.

The BVFA was created in 2016 to discuss and advocate on food issues in the Bow Valley. Their goal is to support community-based food systems and address the food security concerns faced by many residents.

The not-for-profit organization completed their food charter following discussions and workshops in the community. The charter emphasizes the value of local food systems, social justice, education and accessibility to food.

“Food security can take many forms. It can occur when people are forced to compromise the quality of quantity of food they eat due to financial constraints,” Kepkiewicz said. “It also includes situations in which people are worried about running out of food or when people have a limited selection of food. … I was told repeatedly there are people in the valley who fit those criteria and there are people who face the choice of paying for food and paying for housing.”