“Our province undoubtedly supports our not-for-profit and charitable sector— We wanted to support St. Michael Anglican Church so they can continue building a strong community in Canmore.”
0
Feb 20, 2020 10:00 AM By: Chelsea Kemp 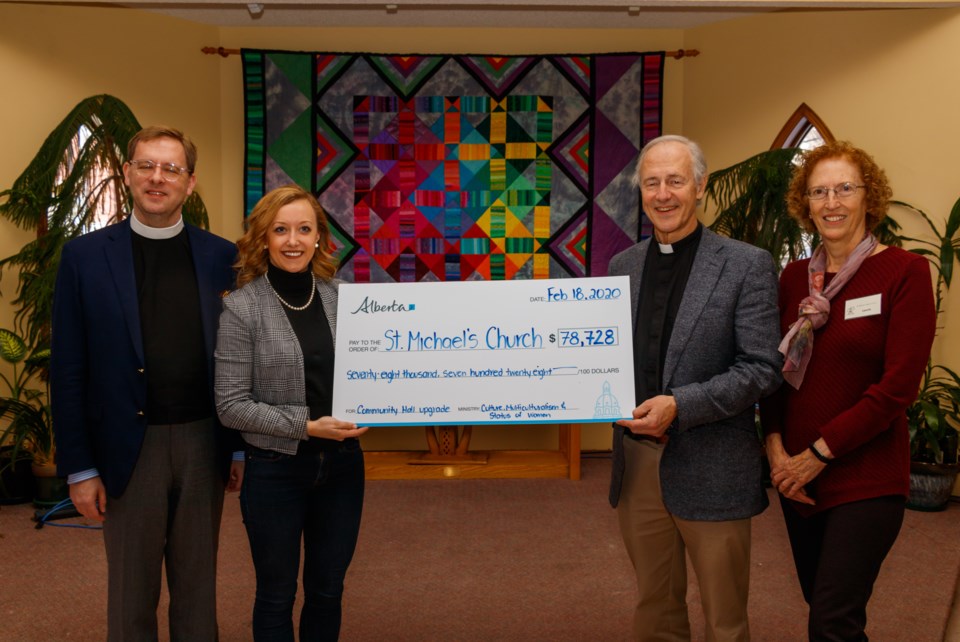 Banff-Kananaskis MLA Miranda Rosin visits St. Michael Anglican Church on Tuesday (Feb. 18) to award a grant of $80,000 for the maintenance and revitalization of the building. CHELSEA KEMP RMO PHOTO

CANMORE– St. Michael Anglican Church will be getting a major facelift after a provincial grant of nearly $80,000 has pushed its fundraising efforts for building renovations to more than $250,000.

Banff-Kananaskis MLA Miranda Rosin was at the Canmore church Tuesday (Feb. 18) to present church staff with a $78,728 government grant.

The funds raised by the church come from the provincial government, an anonymous donation of $65,000, and donations from church and community members for a total of just over half a million dollars. The funds will be used to pay for a new roof and floor for the building, paired with other long-term capital improvements.

Rosin said she was happy to support the church because of the work it does for the Canmore area, and hoping the grant will help the church continue to serve as a community hub.

Rosin said the church is especially meaningful to her because of Food and Friends. When she first moved to the town it proved hard to meet new people, she explained, and the free Monday night dinner helped her make her first friends.

“It is so critical and so lovely to have them providing that warm welcoming place where people can come eat a meal and enjoy fellowship with other people,” Rosin said.

She added that although she was unsure if the church's age factored into the awarding of the grant, she appreciates that the funds will ensure the 100-year-old community centre is around for years to come.

“I think it’s a testament to the work that they do that they have been around as long as they have,” Rosin said. “They’ve been such a cornerstone [of Canmore] for so long.”

Rev. Howard Thornton said the church was pleased to see the support the church fundraiser received from the provincial government and the community.

“This is going to go toward helping with keeping the building operating,” Thornton said.  “We are very blessed to be so successful with Food and Friends and lots of other projects like that where we get lots of people coming to the church, but it’s all wear and tear on the building.”

The funds will play a pivotal role in helping the church to pursue community-based projects like Food and Friends that benefit the community.

Chair of the fundraising committee Ron Lewis said the group spent about a year planning on fundraising and was able to raise the funds in about eight months.

“The whole point of it is to sustain our building so that we can serve the community,” Lewis said. “We’re quite proud of our active role in the community.”

The church was built by miners in the late 1800s for church services, Thornton said, but also to create a centre for the community.

The last major work the church underwent was the construction of the hall in the early 1990s after the church was relocated onto the same property.

The last time the roof on the church proper was replaced was in 1975, and the original shingles from the late 1880s sit underneath. The oldest part of the building is more than 100-years-old and the newest part is around 30 years old.

“It [the grant] was a recognition that other people see it that way, that we’re a church that is really working hard to help all of Canmore,” Thornton said. “We’re just wanting to continue that tradition.”