CANMORE – The most recent collision on the Trans-Canada Highway that left seven elk dead over the weekend marks the third incident in two months near Canmore and the situation has prompted one local resident to start a petition for change.
Apr 30, 2019 3:30 PM By: Jenna Dulewich 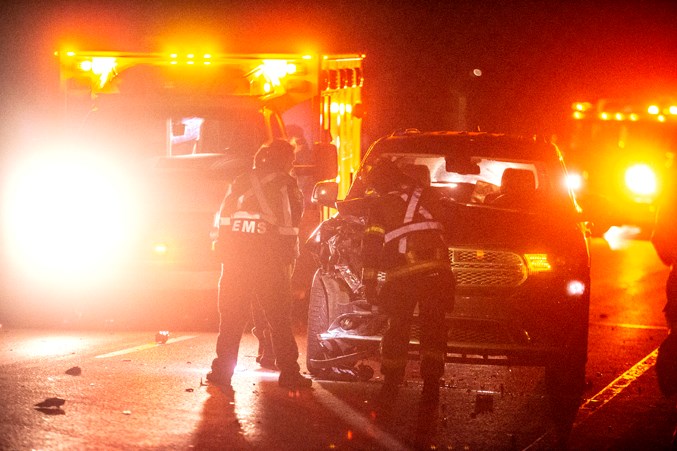 Canmore Fire Rescue responded to a collision between Elk and vehicles along the Trans Canada Highway near Palliser Trail in Canmore in February.

CANMORE – The most recent collision on the Trans-Canada Highway that left seven elk dead over the weekend marks the third incident in two months near Canmore and the situation has prompted one local resident to start a petition for change.

On Saturday night (April 27), seven elk were hit by a semi-truck by exit 91 around 9:20 p.m. Upon RCMP officers arriving on scene, Sgt. Stan Andronyk said four elk were already dead and three had to be "put down."

"We definitely know there are elk in that area so it's not out of the ordinary they were there ... we are just asking the public to always be aware of wildlife or just the possibility there will be wildlife on the road – I know it sounds like a broken record.

"We do our best to make sure highways are safe but we can't ensure animals are off the road everywhere."

In total, 10 elk have died in vehicle collisions on the Trans-Canada Highway near Canmore since Feb. 28.

Canmore resident Cinthia Nemoto is adding her voice to others concerned about wildlife mortality on the highway, including Yellowstone to Yukon Conservation, which has been lobbying to address the issue for several years already.

"I drove by the accident on Sunday morning – it was a semi-driver who hit the elk and I thought, 'Wow, what if it was a normal small car? The driver would not survive the accident'," said Nemoto.

Nemoto started a petition on change.org asking the public to share their stories so when she takes the signatures to newly elected UCP Banff-Kananaskis MLA Miranda Rosin, she can see the magnitude of the issue.

In the first accident, three vehicles were damaged as a result of elk on the road near the Palliser area between exit 89 and 86 of the TCH on Feb. 28. One person was taken to hospital with no serious injuries, but some long-last effects were noted in a letter to the Rocky Mountain Outlook the following week, shared by the woman involved in the collision.

"My right leg is bruised from ankle to mid thigh and swollen around my knee. Where the powder and explosive charge went across the flesh of my leg I have abrasions which look like burns," Fiona Coldridge from Calgary wrote.

"My Durango was a complete write-off... my husband and I are convinced that the height of the hood and the airbags saved my life. I was screaming from the moment I saw the elk and that's because I was convinced from the second I saw it running at me that it was coming through the windshield.

"I have been having nightmares and flashbacks. Seeing the eyes of the elk as it saw my car coming at it and the head of the elk when it was on the hood of my SUV ... yesterday I drove from Banff to Canmore, past the scene of the collision and I had palpitations, a dry mouth and experienced sheer terror."

Coldridge asked for change at the end of her letter.

"I hope that this letter is read by a person of authority who understands that I was close to losing my life ... it's a sad loss of a defenseless animal and unnecessary. Please take action before more elk die and before a human loses their life."

The option of reducing speed limit to 90 km/h on the highway until an wildlife overpass is built was a short-term solution put forward by Y2Y following the second incident where five elk were killed by a transport truck on March 17.

“An interim measure before we actually get the fencing and the wildlife crossing structures could be a reduced highway speed coming out of Banff National Park,” said Hilary Young, senior Alberta program manager for the environment group.

"I think the ideal outcome [of this petition] is the speed being reduced to 90 km an hour," she said, noting it gained more than 1,100 signatures in three days.

"An overpass is ideal, but I know that is expensive ... I do believe we need a complete strategy to deal with this ­– not only speed limits but completely thinking through a strategy to mitigate these accidents."

RCMP officials gave a rough estimate that at least a dozen elk were hit on the stretch of highway through Canmore in 2018, which averages to at least one reported elk collision per month.  At a WildSmart event earlier this year, wildlife research scientist Tony Clevenger estimated vehicle collisions with an elk cost approximately $15,000 per accident.