Wildlife overpass east of Canmore to be built 2021-22

“The project is included in our capital plan for construction to begin in 2021-22 and would take about a year and a half to construct," said Finance Minster Travis Toews earlier this week.
Nov 19, 2020 9:52 AM By: Cathy Ellis 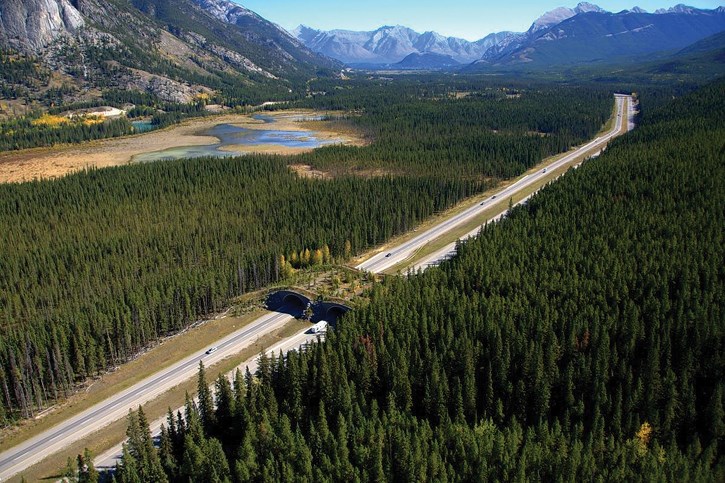 Wildlife crossings, like the one pictured here in Banff National Park, have seen huge success in reducing animal deaths and allowing wildlife to move across the landscape. ADAM T. FORD PHOTO

CANMORE – A long-awaited $7 million overpass east of Canmore is on the provincial government’s capital books for 2021-22.

Alberta Finance Minister Travis Toews said Alberta Transportation has completed its detailed design of an overpass for the Trans-Canada Highway near Bow Valley Gap – to be the first of its kind in Alberta outside of Banff National Park.

“The project is included in our capital plan for construction to begin in 2021-22 and would take about a year and a half to construct,” Toews said in response to questions from Banff-Kananaskis MLA Miranda Rosin in the legislature on Tuesday (Nov. 17).

The Bow Valley is one of the most important regional wildlife corridors in Alberta and it’s also a busy thoroughfare for people, with a daily average of 24,600 vehicles buzzing by on the Trans-Canada Highway.

It’s considered critical in the Yellowstone to Yukon (Y2Y) link.

A growing body of scientific research from around the world shows crossing structures and associated wildlife exclusion highway fencing helps prevent car crashes and saves the lives of both animals and people.

“These mitigations are critical not only for the safety of the critters on our highways, but also the many visitors and tourists who travel these roads every day,” Rosin said.

Rosin said it is lucky there has been no human fatalities, noting five more elk were recently struck and killed by vehicles on the highway.

She called on the government to install high-visibility signage along various areas of the Trans-Canada Highway while waiting for completion of the three-kilometres of promised wildlife fencing.

“The safety of our roads can’t wait,” she said, adding that conditions on mountain roads become significantly more dangerous in winter.

“It is becoming increasingly evident that we need some sort of precautionary safety measures in the meantime.”

Minister Toews, however, said Alberta Transportation has examined high-visibility automatic detection systems, which work by changing driver behaviour when wildlife are in a detection zone.

“Instead, we’re focused on building a wildlife overpass. This will be a major step in reducing animal-vehicle collisions on Highway 1.”

In 2019, Alberta Transportation recorded an average of 24,600 vehicles every day on the Trans-Canada Highway east of Canmore. That’s one car every few seconds – not a lot of time for an animal to safely cross the road and plenty of reason to avoid trying at all.

A 2012 study identified 10 sites along a 39-kilometre stretch of highway from the east gate of Banff to Highway 40, with recommendations including fencing and associated underpasses.

The study, by Miistakis Institute and Western Transportation Institute, also called for one overpass at Bow Valley Gap east of Lac Des Arc. A critical wildlife corridor there has historically seen the highest number of vehicle-wildlife collisions in the entire study area.

In Banff National Park, there are now 38 wildlife underpasses and six overpasses along an 82-kilometre stretch of highway from the park’s east entrance to the border of Yoho National Park.

Highway fencing in the park has reduced wildlife-vehicle collisions by more than 80 per cent and, for elk and deer alone, by more than 96 per cent.