With student enrolment on the decline for many public schools in rural Alberta and public tax dollars at a premium, a campaign was recently launched to promote the formation of a single public education system.
0
Nov 22, 2018 12:00 AM By: Paul Clarke 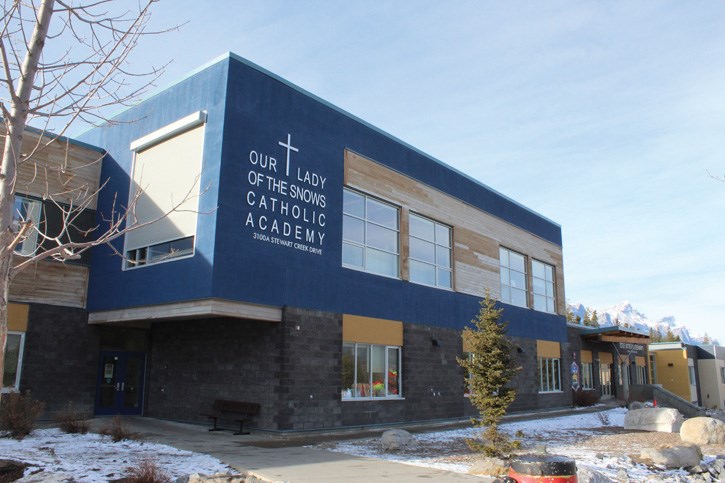 Our Lady of the Snows Catholic Academy currently has a wait list of about 17 students because it doesn’t have anymore more space, while the Candian Rockies Public School division continues to see declining enrolment. The vast differences between school divisions isn’t unique to the Bow Valley and has sparked a campaign at the provincial level to establish a single public school system similar to other provinces in Canada.

With student enrolment on the decline for many public schools in rural Alberta and public tax dollars at a premium, a campaign was recently launched to promote the formation of a single public education system.

The Public School Boards Association of Alberta (PSBAA) hopes its campaign will spark discussion about the increasing financial costs to run multiple school systems in Alberta ahead of the next provincial election in the spring.

“I think this conversation is long over due,” said Carol Picard, a member of the executive committee with PSBAA and chair of the Canadian Rockies Public School (CRPS) board.

She stressed the campaign is not anti-Catholic, but rather an attempt to find efficiencies in an education system that is fragmented between six different school authorities funded by public tax dollars.

“Please do not in any way interpret this as anti-Catholic, there’s no religious animosity on our part,” said Picard, who identifies as Catholic.

“What there is though, is a frustration with the inefficiencies of the current system and a whole-hearted desire to do better by our children in a world of scarcer and scarcer resources.”

In fact, Ontario, Saskatchewan and Alberta are the only three provinces in the country that still have a Catholic education system.

According to data from Alberta Education, last year 67 per cent of students attended public schools, 23 per cent attended Catholic schools and the remainder were enrolled in private, charter, Francophone, First Nation or other schools.

The Alberta Catholic School Trustees’ Association (ACSTA) holds the position that parents should have a choice when it comes to which school system their children attend.

Its argument is backed by the Alberta Act of 1905, which guarantees the educational rights of Catholics. Francophone education is also protected under the Canadian Charter of Rights and Freedoms.

“We believe that Alberta parents want clear choice and options for their children’s education,” said Serena Shaw, president of ACSTA.

“Right now we have 180,000 children in the Catholic system whose parents have chosen this for them, and we feel that forced amalgamation to deliver greater efficiencies, that hasn’t been proven, isn’t something that we feel would benefit our students.”

Picard said her organization respects the constitutional rights of Catholic education, however she argued the province could save roughly $250 million to $260 million a year in redundancies and duplication of services if there was a single education system.

“There’s savings to be had, but it’s not all about the money. It’s more about what kind of education are we offering to out 21st century students?” said Picard, who is also chair of the CRPS board.

“Why would you build in a small town two schools that are the bare minimum when you could build one school with the bells and whistles that kids today need?”

Part of the problem, she said, is that for many rural school divisions, such as CRPS, enrolment is declining, meaning there are fewer dollars to go around.

In many rural communities, including Canmore, the problem is exacerbated because school authorities compete to attract students.

In fact, enrolment in separate schools is growing 36 per cent faster than the province’s enrolment as a whole, according to five years’ worth of data from Alberta Education.

According to Picard, another problem is the public system has to accept any student that shows up on its doorstep, including those with mental, physical and social limitations, putting a strain on its resources.

“We’ve had students punted back to the public system from our Catholic sister board because they don’t meet the requirements of their school and they’re allowed to do that, but we get some incredibly handicapped kids coming back at us that cost us a ton of money for educational assistants,” said Picard.

“If you’re going to have parent choice and it’s going to be all about parent choice, then there should either be legislation that says if the parent’s choice is to put the child in the school then you have to accept that child, no more punting that child back to the public system.”

“Our Lady of the Snows absolutely does not reject students with disabilities,” wrote Morrison in an email.

He said there are currently about 17 students on the waiting list at Our Lady of the Snows Catholic Academy because the school has no more space.

“If we opened up the door to every non-Catholic that wanted to get in, we’d need more than a new classroom, we’d need a new school,” he said.

“We know two things about our situation in Canmore. First, there are no new school sites available, and; second, we must take every Catholic student that registers. Because of this, we have to turn down a lot more non-Catholic students than we would like, because we must ensure we have room to accept all Catholic students now and into the future.”

On top of this, Morrison said a lot of Catholic schools in his division shoulder a disproportionate number of students who can’t speak English more than their public school counterparts do.

“We’re about 20 per cent English learners and we probably have double what most of our neighbours do, and a big reason is the countries the new Canadians are coming from are all Catholic, so we probably reduce costs and expenses for other boards because we take so many of those students and we have to invest heavily to serve them,” said Morrison in a follow up telephone interview.

He said it was “very unfortunate” to learn that the issue was being characterized in this way.

According to Picard, another challenge facing the public system is that a lot of parents are choosing to send their children to Catholic school in Canmore not because of religion, but because of pragmatism.

“It’s not about the Catholicism, it’s about proximity,” said Picard, explaining a lot of parents who are not Catholic send their kids to a Catholic school because it’s closer to home.

On the flip side, she said there are also parents who send their kids to Catholic schools that are further away, so they have to take the bus, buying them free childcare.

“We have parents in Banff who are sending their children to the Catholic school because of the bus route where they can get 15 extra minutes to get ready for work,” said Picard.  “We have parents in Canmore doing the same thing.”

That being said, she said she’s also aware of students who have left OLS because Canmore Collegiate High School (CCHS) offers more courses and opportunities such as shop class and football.

“There’s actually no definitive studies that show that’s actually the case,” said Shaw. “In fact, there’s a myriad of failed amalgamation experiments in different systems that would show that hasn’t been the case.”

While she rejected the idea of creating a single education system, Shaw said her organization was open to collaborating with other school authorities and has already been doing so when it comes to services like busing.

Picard said she was also open to collaboration and even floated the idea of allowing students from different systems to travel between schools so they can access different resources and courses.

She also suggested there could be room in the public system to offer Catholicism, pointing to the Edmonton Public School system, which already offers a variety of faith-based schools for those who are Jewish and Muslim.

“I think we’re hurting each other by drawing that big firm trench in the sand that nobody can cross over,” said Picard.

“I’ve been approached by parents who would love their child to come to CCHS just to participate in football, but the response has traditionally been that if they really want those programs they should enroll within our school because of the dollars attached.”

Shaw was less open to the idea of allowing students to travel between schools to attend different courses, arguing that their faith must be part of everything a student does.

“There are implications to having kids going back and forth between schools because we have to be able to permeate all that we do and all of our interactions with our faith,” said Shaw.

“That’s the difference about Catholic education; it isn’t just a program that you can put into a classroom, or into one particular school.”

Picard pushed back, questioning whether that’s a valid argument.

“When I see the president of the ACTSA talk about the advantages that Catholic education offers to students that permeates the school right down to the welding class, I question how does Catholic welding differ from regular welding?” asked Picard.

Minister of Education David Eggen avoided picking sides in the discussion, stating the government will continue to work with all school boards to invest in the success of Alberta students.

“I agree with the PSBAA on the fact that the failed policies of the past won’t help improve classroom conditions,” said Eggen.

“However, I am proud of the education that Alberta’s students are getting now – our school system provides students in Alberta with one of the best educations in the world, and our government is focused on making investments so that our public, Francophone, Catholic, charter, and independent schools can hire more teachers, build new and modernized schools, and protect and support Alberta’s students.”

Picard acknowledged her organization faces an uphill battle, but hopes the campaign will start a much-needed discussion about the future of education in Alberta.

“It’s a very complicated knot to unravel, but at this point what we’re asking for is a conversation,” said Picard, adding it’s been 113 years since the Alberta Act was signed guaranteeing the right to Catholic education.