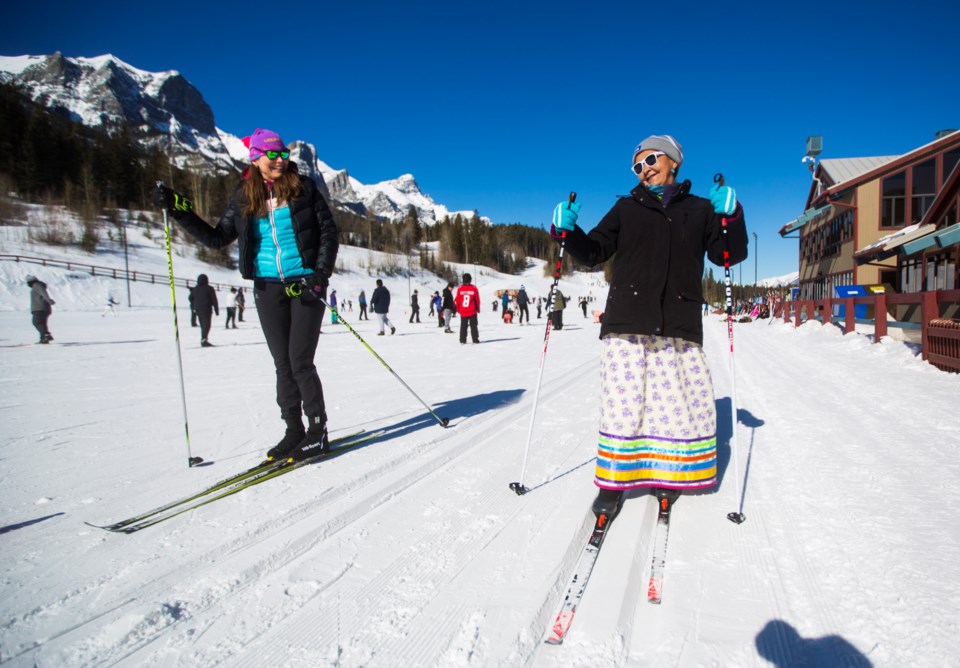 Elder Jaquline Rider, right, joins students from Morley, Exshaw and Tsuut'ina as they take part in the fifth annual Spirt North ski day at the Canmore Nordic Centre last year. The Government plans to continue grooming at the Canmore Nordic Centre while it recently announced it will no longer groom cross-country track setting in the three main areas traditionally groomed by government staff in the Kananaskis region, including in Peter Lougheed, Mount Shark and the Kananaskis Village area. RMO FILE PHOTO

Beginning fall 2020, there will be no groomed cross-country track setting in the three main areas traditionally groomed by government staff in the Kananaskis region, including in Peter Lougheed, Mount Shark and the Kananaskis Village area.

The decision, which was buried on Alberta Environment and Parks’ website but not announced in a media release, quickly drew strong criticism from recreational and professional skiers, as well as Nordic ski clubs throughout the region.

Canmore’s Sara Renner, a former Olympic cross-country skier, was shocked when she heard the news.

She said any investment in sport and wellness has huge benefits in terms of health care savings and mental health, adding that Nordic skiing is an entry sport for Canadians of all diversity and income levels to experience the outdoors.

“To me, this just seems so backwards and so hard for me to rationalize,” she said.

Grooming will continue at the Canmore Nordic Centre. Track-setting will also continue for cross-country skiers at West Bragg Creek, which is currently done by the Greater Bragg Creek Trails Association.

According to Alberta Environment and Parks, pulling back on grooming the three cross-country areas in K-Country will save an estimated $200,000.

Jess Sinclair, press secretary to Alberta Environment and Parks Minister Jason Nixon, said the province is $86 billion in debt and “tough choices need to be made.”

“That said, we’re open to exploring partnerships with Nordic ski clubs across the province should that desire exist,” Sinclair said, noting they have yet to establish a partnership model.

“As the cross-country skiing season is winding down, we’ll be exploring these in the coming months.”

Alain Parent, program director for Canmore Nordic Ski Club, didn’t see this announcement coming, noting there was no public consultation by the government.

“It’s terrible news. For me, to just overnight to decide that grooming will all of a sudden be stopped, it doesn’t make any sense,” he said.

“Lots of people move here for the outdoors, for fitness, for health and wellness – and cross-country skiing is one of the activities people do in winter.”

Parent said the first step for the government should have been to ask if skiers if they had any suggestions for moving forward, including if they would support paying a user fee instead of outright eliminating grooming.

“That would be the first step in my mind – not slashing, cutting, eliminating a program like that,” he said.“I am sure user-pay could work quite well. It works other places, so why not in Kananaskis?”

Parent also points to the fact that not all skiers, including families, are backcountry skiers.

“Not everyone is set up or trained to go out in the backcountry, so groomed trails are safe for everybody to use,” he said.

From a tourism perspective, Renner believes the UCP government’s decision is short-sighted as well.

“We are a tourism-based economy and don’t tell me that visitors don’t want to cross country ski and enjoy winter, “ she said.

“This is important for our town financially. People come to this region to ski and that money comes back to the government in terms of visitor dollars.”

“I support our trails and I support the wonderful civil society that we have in Alberta,” she said.

“I’m not saying we should ban cross-country skiing in the park. I’m saying it presents an opportunity to our civil society and to those who are frankly better at managing this.”

Rosin points to the cross-country area at west Bragg Creek as a model that works, noting that ski trail grooming is carried out there by the Greater Bragg Creek Trails Association.

“They have formed from nothing and created an expansive trail network, one of the most highly used in the province,” she said.

“They’re all volunteers and they’re not government-run and that’s a perfect example of what civil society can do in our parks…. They can create trails and maintain and they can fundraise to upkeep the trails.”