KANANASKIS – A group of ten backcountry campers in Kananaskis Country had to be rescued Thursday (July 4) after an adolescent male began to experience medical distress as the result of hypothermia.
Jul 5, 2019 2:54 PM By: Kiah Lucero 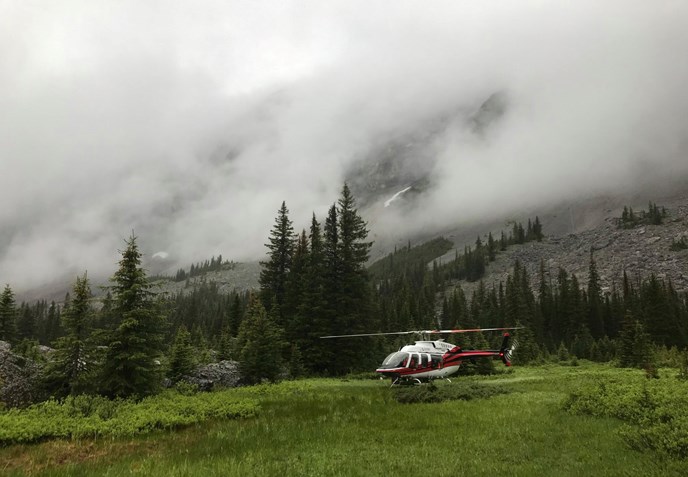 On Thursday (July 4), a group of ten people were rescued from Forks Campground in the Kananaskis Country with the help of Alpine Helicopters.

KANANASKIS – A group of ten backcountry campers in Kananaskis Country had to be rescued Thursday (July 4) after an adolescent male began to experience medical distress as the result of hypothermia.

Kananaskis Public Safety and Alpine Helicopters responded to a call from a personal locating device around 3:30 p.m. for an evacuation from the Forks Backcountry Campground.

“Given the weather we had, one person was not doing fairly well, quite poorly from the understanding that we had," said Mike Koppang from Kananaskis Public Safety, Alberta Environment Parks. "We had responded to the area with Alpine Helicopters, which did an amazing job flying through the weather, which was quite challenging."

The group was on a backcountry camping trip in Kananaskis, when the weather turned cold and wet and the adolescent male began to experience hypothermic symptoms. While they waited for the evacuation by helicopter, Koppang said they tried to warm up the individual in severe condition.

“As a result of them working hard to try to keep the other individual warm and comfortable, they had all gotten quite wet and cold, so in the end, we did end up evacuating the entire group out back to the front country,” Koppang said.

By 5 p.m., the group was evacuated and the individual was transported to EMS for treatment. According to Alberta Health Services, the adolescent was "in serious, but stable condition."

While the trip took a turn for the worst, Koppang commended the group for its teamwork in helping the individual.

“They did a really good job in terms of being prepared, they did an awesome job maintaining care for the person that wasn’t doing too well,” Koppang said.

Although Koppang said that the group was well prepared for their trip, he wants to remind people who are headed in the back country to be prepared.

“Before people go out into the backcountry, they should make sure that they’re checking the weather … It’s not always sunshine and rainbows out there,” Koppang said.

“It is really often cold, wet and it can even snow and it’s snowing in the alpine here right now. People need to be thinking about the weather before they head out.”

Having the proper clothing gear, supplies, especially a personal locating device, and even a back-up plan for if something goes wrong, is what is needed before heading to the backcountry.

On Wednesday (July 3), a 19-year-old female who fell and hit her at at Ya Ha Tinda Ranch in Banff National Park was transported to Foothills Hospital In Calgary with the help of Alpine Helicopters and STARS air ambulance in stable, non-threatening condition.