“We’ve been telling people for years that one way we can minimizes our impact in these parks is to keep our pets leashed. We’ve seen the consequences of pets not being leashed and what can happen.”
Nov 19, 2019 3:43 PM By: Cathy Ellis 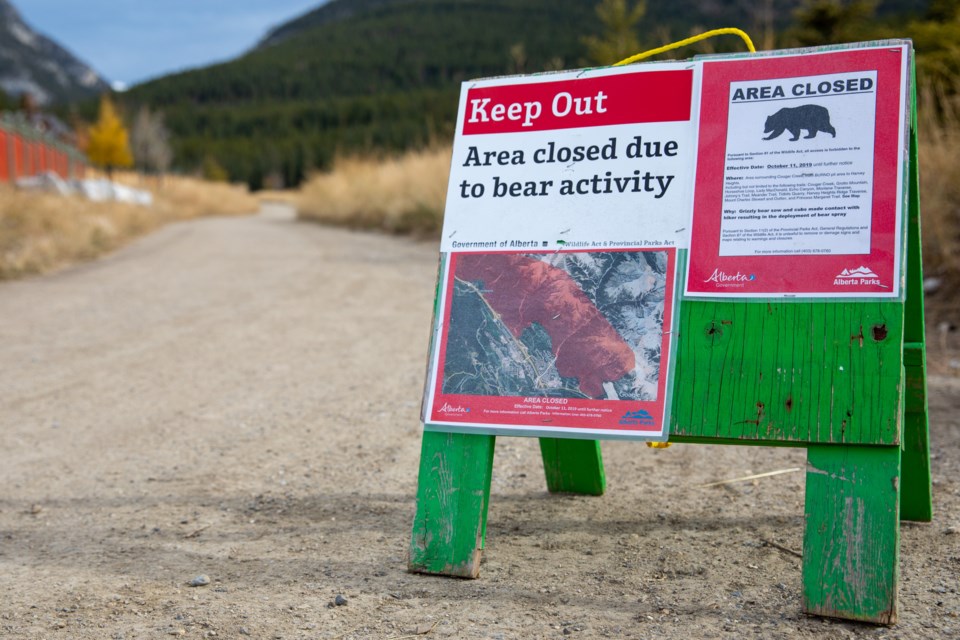 A closed sign is see at the Cougar Creek trailhead on Tuesday (Oct. 15). A hiker with an off-leash dog was injured in a defensive attack by a mamma grizzly bear last week, forcing a massive closure on the north side of the Bow Valley to protect people and wildlife. EVAN BUHLER RMO FILE PHOTO

Alberta Parks officials say that in Canmore provincial court earlier this month, a third-time offender with three dogs off-leash chasing marmots was fined $750 and had her dogs banned from Kananaskis Country for 12 months.

In a second court case, provincial officials said a mountain biker on the High Rockies Trail in K-Country was fined $575, with the judge issuing a judicial order banning his dog from the park for six months. It was his second off-leash dog offence.

Arian Spiteri, district conservation officer for Alberta Parks, said a standard ticket fine for dogs off-leash is $115, but some charges can be sent to court automatically depending on the circumstances.

“We do have the authority if it’s repeat offenders, or depending on the seriousness of the incident, that it can end up in court,” said Spiteri.

“Our goal is to educate and inform people. We try hard to educate to avoid punitive measures.”

The first incident was reported in July to Alberta Parks by a member of the public, who had unsuccessfully asked the dog owner to leash the three dogs in the Highwood Pass area of K-Country. The other incident was on the High Rockies Trail in mid-June.

Spiteri said the goal is to educate people about the importance of keeping dogs on leash in provincial parks.

“We’ve had lots of incidents over the years of dogs that have disappeared and never been found in our parks and we’ve had dogs that have been killed by wildlife,” she said.

“We’ve also had a variety of species of wildlife that have been harassed, or killed, as a result of dogs off leash.”

Spiteri pointed to an Oct. 2 encounter in Canmore near the Ha-Ling Peak Trail in which an off-leash dog was killed by a cougar.

She also pointed to the Oct. 10 incident involving a Canmore woman being fined $115 for having an off-leash dog. In that situation, a bear followed the dog back to its owner, biting her on the leg.

“We’ve been telling people for years that one way we can minimizes our impact in these parks is to keep our pets leashed,” said Spiteri. “We’ve seen the consequences of pets not being leashed and what can happen.”

Meanwhile, the courts handed a hefty $2,200 fine to a camper who left garbage out at Mount Kidd RV Park on Aug. 17 this year, attracting a black bear to the site.

“The garbage was left out on site, left in a bag and in the bag there were egg shells and French fries and a couple of things like that,” said Spiteri.

“We are hopeful the bear got scared off before it got any food rewards, but we can’t say that with certainty.”

The bear travelled through the campground on occasion, often seen looking in fire pits.

Conservation officers ended up trapping the bruin and fitting it with an ear tag transmitter to keep an eye on its movements.

“We released it and monitored it, but after it was trapped it didn’t return to the campground,” said Spiteri, noting the bear is likely in its den by now.

“We’ll have to monitor this bear into next year though to see if this incident becomes a pattern,” she said.

“We really value that people can help to alert on these situations,” said Spiteri. “The public has a role to play on being stewards of these provincial parks.”