LAKE LOUISE –Major development plans for the Lake Louise ski resort for new lodges, ski lifts and runs over the next 10 to 15 years are drawing mixed reaction.
May 9, 2019 12:00 AM By: Cathy Ellis 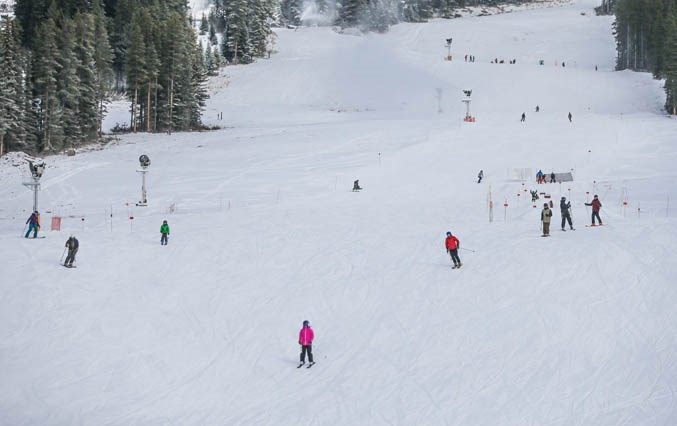 LAKE LOUISE –Major development plans for the Lake Louise ski resort for new lodges, ski lifts and runs over the next 10 to 15 years are drawing mixed reaction.

Environmental groups are voicing concerns that this area of Banff National Park is already busy and over developed, while a park business lobby group says the hill’s proposed long-range plan puts the resort in a good position to be competitive into the future.

The Bow Valley Naturalists say Lake Louise area is one of the most crowded areas in Banff in summer, adding they have concerns about summer use relocation to a proposed new lodge and interpretive centre at the top of Eagle Ridge.

“Until Parks Canada can come up with a coherent overall strategy for managing visitor use, the expectations of commercial operators and an understanding of the limits to growth, we will continue to have incremental piecemeal development with no clear understanding of the long-term impacts.”

The Association for Mountain Parks Protection and Enjoyment (AMPPE), on the other hand, voiced support for Lake Louise’s summer attraction proposal, which currently operates out of Whitehorn Lodge near an area frequented by grizzly bears.

“We have a winter experience in the parks, but the majority of visitors come to the parks in the summer,” said Stuart Back, co-chair of AMPEE’s board of directors and vice-president of operations for Pursuit in Banff and Jasper, formerly known as Brewster.

“Strategically, it makes sense to offer vibrant experiences year round, so facilitating measures to improve summer experiences is obviously a good thing.”

The long-range plan, which requires Parks Canada’s approval, calls for a new mountain-top day lodge and interpretive centre at Eagle Ridge, a new day lodge next to the original Whiskey Jack Lodge, expansion of Temple Lodge and a new Top of the World warming hut.

Richardson’s Ridge would be developed, and the ski resort would be granted winter use of Hidden Bowl and West Bowl through seasonal licence of occupation agreements. Future projects for Hidden Bowl are not part of this development plan.

While no development is planned for West Bowl, the resort would start doing avalanche control work there given skiers are currently accessing that backcountry area from the Summit lift.

Dan Markham, Lake Louise ski resort’s director of brand and communications, said with new chairlifts and upgrades to existing chairlifts, the resort would be able to provide a ski and park area experience to accommodate about 9,000 skiers and riders and 1,000 non-skiers a day.

He said new chairlifts and terrain will provide much-needed beginner and lower intermediate ski runs and a range of opportunities for young people and families, as well as new areas for expert skiing.

The resort, he said, would also be positioned to better meet the needs of FIS World Cup competitions, amateur and grass roots events and training.

“The best way to describe it is we’re building more up than out,” said Markham.

Conservationists argue the proposed new Prunepicker and Richardson's Ridge lifts would be major intrusions into what is currently wild, undeveloped national park land, occupying habitat important to mountain goats, grizzlies and other species.

Bunyan said while there are some positives in the Lake Louise ski area plan, BVN does not believe that the draft long range plan represents a net environmental gain overall, noting there is a lack of supporting scientific data.

He said Sunshine Village long-range plan demonstrates that it is possible to make an environmental gain through lease boundary adjustments, but said that’s not the case with Lake Louise.

“It’s our belief that any potential environmental gains for the Lake Louise ski hill will be more then offset by new development and expanded summer use,” said Bunyan.

Back said Lake Louise has tabled a very “detailed, collaborative and balanced” plan, allowing the resort to think ahead in terms of guest experience into the future.

“It has enormous potential to deliver not only ecological integrity improvements, but a plan that means the resort can remain a world class destination,” he said.

The deadline for public input on the draft long-range plan and accompanying environmental impact analysis is June 15.