LAKE LOUISE – Heritage conservation and revitalization are two core concepts being incorporated into a master plan for the future of the Canadian Rocky Mountain Resorts’ (CRMR) Deer Lodge in Lake Louise.
Nov 8, 2018 12:00 AM By: Tanya Foubert 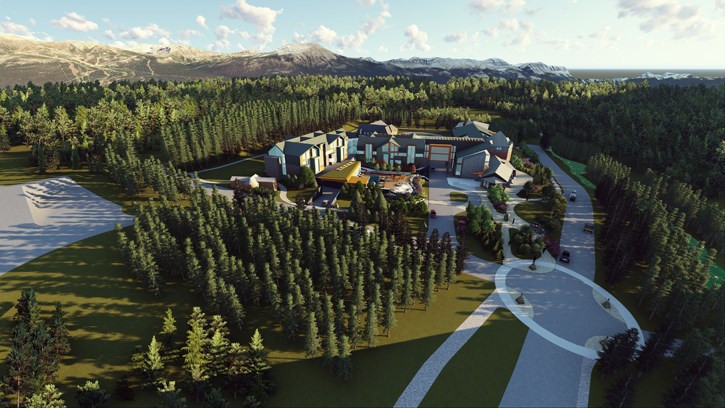 Heritage conservation and revitalization are two core concepts being incorporated into a master plan for the future of the Canadian Rocky Mountain Resorts’ (CRMR) Deer Lodge in Lake Louise.

LAKE LOUISE – Heritage conservation and revitalization are two core concepts being incorporated into a master plan for the future of the Canadian Rocky Mountain Resorts’ (CRMR) Deer Lodge in Lake Louise.

A master plan for Deer Lodge has been 20 years in the making. CRMR acting president and development manager Larkin O’Connor said the company is at a stage where it is ready to share with the public its vision for the revitalization project.

“Our concept plan shows what we are allowed and what we want to do as we engage with Parks Canada (in the development process),” O’Connor said. “We are trying to take small incremental steps and getting feedback right away, so the money spent on the design is always designing something all parties are comfortable with.

“Certainly it is the biggest project CRMR will undertake since the original building of any of our properties – it is actually a massive game changer for us.”

CRMR held a public open house in Lake Louise in September to get feedback from the community on the revitalization concept and master plan at this stage.

The conservation of elements from the storied lodge has CRMR focused on maintaining several key aspects of the site in Lake Louise, like the iconic teahouse and rotunda.

“The historical parts are all part of the revitalization – the dining room, lounge and iconic rotunda tower – those are all quite well built and on solid footings,” O’Connor said. “Really what we are trying to do is save the property.”

The plans, which are still at a concept design stage and working toward development permit submission, include increasing the number of rooms from 73 to 88 and building an underground parking structure. The goal is to remove vehicles from the experience at the lodge and focus on being in the mountains, O’Connor said.

Those parameters were set out in the 2000 Lake Louise Community Plan. In order to get to this point, O’Connor said the company renegotiated 11 separate leases on the site into one with Parks Canada.

“Overall it provides strict guidelines that support heritage conservation and architectural requirements,” Kubian added. “It provides a baseline to ensure ecological integrity and commemorative integrity within all of Banff National Park are protected with each business in the community.”

The community plan allows for an expansion of 960 square metres to the existing 5,854 square metres of commercial area, as well as the increase to 88 rooms.

Kubian said while traffic flow patterns are not specifically outlined in the community plan, they will be reviewed during the development process.

“Anything we can do to improve traffic flow efficiency on Lake Louise Drive is a positive, and one of the key aspects we are managing for,” he said. “Each development takes a different path with respect to how it moves through the process and this one is very much in a conceptual stage.”

Deer Lodge has a historic past in Lake Louise. It is well placed along Lake Louise Drive on the way to the Fairmont Chateau property and its iconic teahouse was originally built in 1923 with the lodge following in 1925. It was where the local Swiss guides would stay and meet their clients before heading out for a day in the mountains.

It began as a summer-only operation and additions to the lodge occurred over time. There was a garage for tour operators, a pharmacy and a gas station on site.

CRMR bought the lodge in the ’80s and renovated it to become a year-round accommodation for the tiny resort community in the Rocky Mountains.

“Very little has changed since we opened it up in 1984,” O’Connor said. “When we got involved it was pretty much in disrepair and a summer-only property still.

“We have done everything we can to improve … we winterized it by adding a massive heating system, which is not quite outdated.

“The best parts of the building are thankfully the oldest parts … we have derelict portions of the site that are really related to very poor construction that didn’t survive the elements up there.”

Energy efficiency at the property is also challenging for its operations, and the facility does not meet the needs for conferences. O’Connor said a renovation would not bring it up to code and CRMR is at critical junction for its future.

While the derelict buildings on site would be removed, key design aspects that reflect their history and importance to the location are maintained in the design concept, which was created by Marshall Tittemore Architects.

“The buildings are totally derelict, but we are saving them in a more holistic sense,” O’Connor said. “We have always loved the history of the site and it ties into this spot where you used to meet your mountain guides.”