CANMORE – The application by a major land developer to establish a new wildlife corridor at the eastern edge of the town of Canmore has been denied by the provincial government.
0
Jun 26, 2018 6:20 PM By: Tanya Foubert 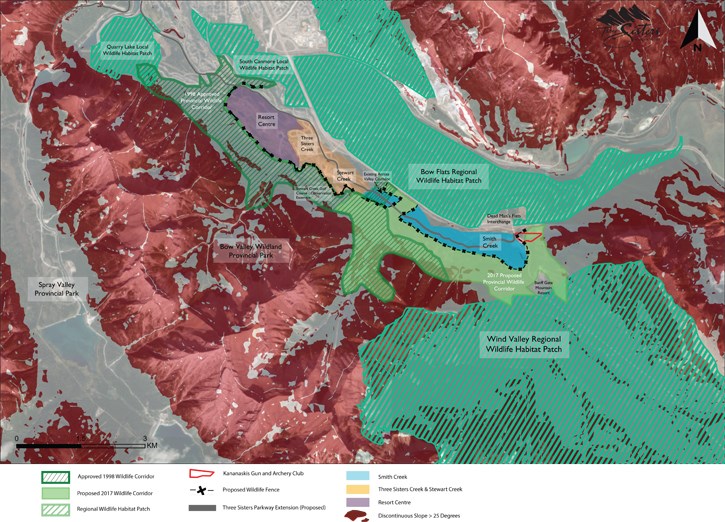 A map of the proposed Smith Creek wildlife corridor submitted by Three Sisters Mountain Village to Alberta Parks in January 2017.

CANMORE – The application by a major land developer to establish a new wildlife corridor at the eastern edge of the town of Canmore has been denied by the provincial government.

Three Sisters Mountain Village applied to Alberta Environment and Parks in January 2017 to get final approval for a wildlife corridor required for the company to move forward with more development to expand Canmore's border to Dead Man's Flats.

In a decision issued Tuesday (June 26), Alberta Environment and Parks operations executive director Roger Ramcharita reached the conclusion that while the application had several positive aspects to it, the width of the proposed corridor at the eastern end of Smith Creek is “not satisfactory.”

“The application contains several positive aspects to maintain wildlife movement, but there are deficiencies which must be addressed to ensure that the wildlife corridor will achieve the purposes stated above over the very long term,” wrote Ramcharita in his decision.

TSMV owner David Taylor said the company is disappointed with AEP's evaluation of its application and the decision. He said TSMV understands the province is willing to work with the developer on submitting a revised application.

"The province has repeatedly shared that TSMV submitted a quality application with significant peer-reviewed science on wildlife corridor movement," Taylor wrote in an email to the Outlook. "We are committed to working with the Province on reasonable revisions to our application.

"The province has asked us to make changes to our proposed corridor, so we need to determine how to do that while maintaining the integrity of our project."

It took the province 17 months to reach a decision on the corridor, during which time it sought public input on the proposal. That included a review of 439 letters and Ramcharita attended two public information sessions.

Taylor said the province has indicated a re-application process would take less than six months "given the amount of work and consultation that has already taken place."

Yellowstone to Yukon Conservation Initiative program director Stephen Legault said the decision by the province is not only significant locally, but has continental implications for wildlife connectivity and movement.

"In the context of the Bow Valley, it is a critical link in the mountains that stretches from the Yellowstone to the Yukon and making this decision ... at the continental scale is a very big deal," Legault said. "What we are seeing is a very positive shift to science-based decision making where the government has weighted the preponderance of evidence provided through good peer-reviewed science and said in fact this is not in the best interest of viability for the wildlife corridor."

He said analysis of the feedback submitted to Alberta Parks showed the community of Canmore was also strongly in favour of appropriate scale when it comes to future development and the importance of a viable wildlife corridor.

"My hope is that TSMV would be willing to sit down again and have a productive conversation on where to go with this," Legault said. "Y2Y's preference is to work collaboratively with the Town, Three Sisters and the province to develop solutions that work for the developer and the community and ensures the long-term, 100-year plus viability of the corridor."

The issue dates back to the 1991 Natural Resources Conservation Board decision to approve a new recreation and tourism project in the Bow Valley. It included conditions to incorporate into its detailed design plan the provision for wildlife movement corridors “in as undeveloped a state as possible.”

Over time, TSMV established wildlife corridors in sections as development moved down the valley. The Smith Creek corridor is the final one needed by TSMV to complete its development area. If approved, it would allow the developer to continue with municipal development approvals from the Town of Canmore to establish its final area of development – Smith Creek.

Because it is the final corridor to be established, it created an opportunity for the province to examine the functionality of the system of corridors established from west to east in the valley for wildlife to navigate through in conjunction with a system of habitat patches.

TSMV submitted and withdrew an application to the municipality in 2017 for an area structure plan for Smith Creek, to allow for the province's decision making process on the corridor to be completed. It also submitted a major amendment to its resort centre area structure plan, that was defeated by vote of council. TSMV represents 80 per cent of the land left remaining inside the Town of Canmore's urban growth boundary that can be developed and its property extends all the way to the Thunderstone Quarry and interchange for Dead Man's Flats.

While the Smith Creek wildlife corridor would be brand new, the application by TSMV also proposed to change the alignment of the adjacent Stewart Creek corridor. The re-alignment would change the location of a highway underpass from where it is currently found to the east of Stewart Creek phase three. The change would place the underpass for the Trans-Canada Highway in the same location as Smith Creek, which has been identified as high-risk for flooding.

In his decision, Ramcharita refers to the fact that recommendations from the NRCB decision set out that primary corridors should not be narrower than 350 metres.

“The primary purpose of the wildlife corridors as identified in the NRCB decision report is to ensure that the TSMVP development would be built in a way that ensures wildlife movement is enabled along the valley (east to west) and across the valley (north to south).

“The NRCB decision report recommended that wildlife corridors be no less than 350 metres and be designed to allow movement for a full range of species.”

He found that the eastern end of the proposed corridor contained discontinuous steep slopes, which in his view would partially impair wildlife movement. While TSMV submitted in its application and supplemental materials that wildlife trails exist on steeply sloped terrain, Ramcharita referenced published scientific and technical reports for habitat selection in the Bow Valley by species like grizzly bears, cougar, elk and wolf. Research shows those species prefer flatter habitats and avoid steep slopes.

“While this portion of the corridor will certainly allow for movement by some individuals throughout the year, it is unlikely to accommodate full movement by all species, and age and sex classes within species during all seasons,” wrote Ramcharita.