DEAD MAN’S FLATS – More than five years have passed since the 2013 flood affected Bow Valley communities and work to prevent a similar disaster in the future continues to move forward.
0
Mar 13, 2019 11:29 AM By: Jenna Dulewich 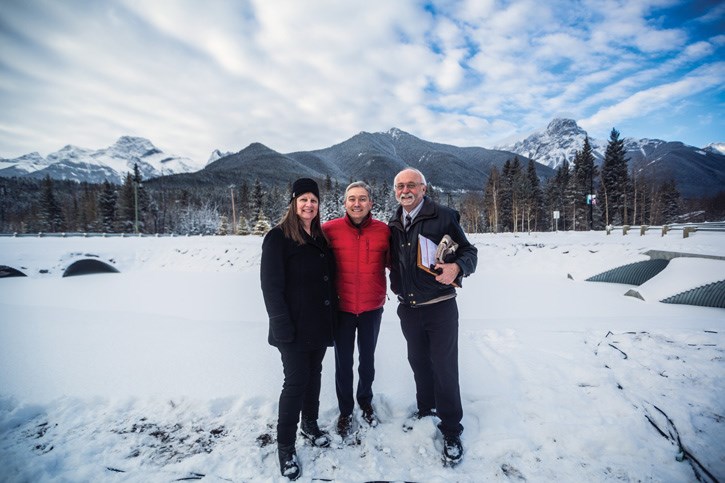 Acting Mayor for Canmore Vi Sandford, Canada’s Minister of Infrastructure and Communities François-Philippe Champagne, and M.D of Bighorn Reeve Dene Cooper announce $13.7 million towards flood mitigation in Canmore and the M.D. of Bighorn at Pigeon Creek in Dead Man’s Flats on Wednesday (March 13).

DEAD MAN’S FLATS – More than five years have passed since the 2013 flood affected Bow Valley communities and work to prevent a similar disaster in the future continues to move forward.

That work got a boost on Wednesday (March 13) after the federal government announced it would provide $13.7 million for debris flood mitigation along steep creeks in the Bow Valley, including Pigeon Creek in Dead Man's Flats.

"In this case the public interest is not just property, lives will be saved over time with these installations, so they are very necessary."

During the 2013 flood in the Bow Valley, the extreme rainfall and snow melt resulted in significant debris floods in multiple steep creeks throughout the valley, causing millions of dollars in damage to infrastructure, closing major transportation routes and damaging local residences.

The $13.7 million, given through the Disaster Mitigation and Adaptation Fund, will go towards projects geared to prevent steep creek flooding in the future. Different from river or overland flooding, Copper said steep creek flooding could result in a flash flood with very little time to react.

"If our roads are gone and you can't get in then we can't get out ... there is nothing more important than what we are doing right now," Cooper said.

The announcement was made at Pigeon Creek, a unique piece of land that has shared responsibilities between the MD of Bighorn and Town of Canmore.

"By investing in this important flood protection project, we are helping the communities of the Bow Valley get ahead of this problem,” said Minister of Infrastructure and Communities Francois-Philippe Champagne.

“This important work will equip the community with the infrastructure it needs to better protect residents, become more resilient to future flooding events and greatly reduce the costs of recovery following extreme weather incident.”

It is the third project announced through the Disaster Mitigation and Adaptation Fund (DMAF), a $2 billion, 10-year program to help communities build the infrastructure needed to better withstand natural hazards such as flood, wildfires, earthquakes and droughts.

So far, all DMAF projects announced are located in Alberta.

Nine creeks in the Bow Valley have planned mitigation projects that are expected to start rolling out one at a time on a priority basis.

"When Canadians stand shoulder to shoulder with a common task they are a formidable force that can accomplish significant structure," Cooper said.