“Despite the current COVID situation, there’s still quite a bit of traffic on that road, and given the number of bears that are there, we decided to implement the no-stopping zone again this year.”
May 15, 2020 2:05 PM By: Cathy Ellis 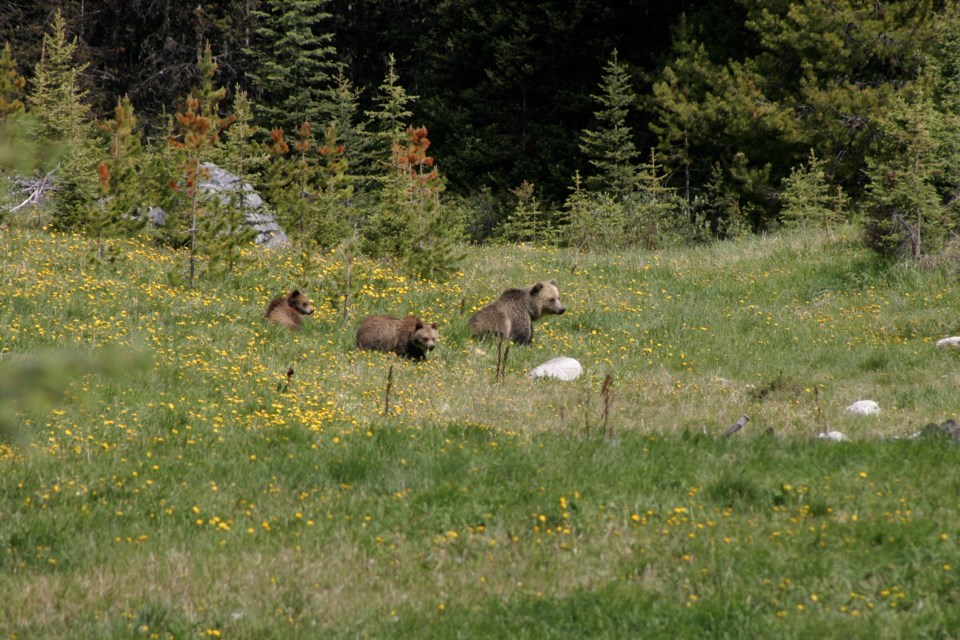 KOOTENAY – At least 10 bears feeding roadside, including two mamma grizzly bears with cubs and a black bear with young ones, have forced the annual no-stopping zone in Kootenay National Park to go into effect.

The no-stopping zone, which has been in place every year for the past six years, applies to a 15-km stretch of Highway 93 South between McKay Creek operations centre above the Radium hot pools and Settler’s Road.

Parks Canada wildlife experts say that narrow shoulders and blind corners, combined with at least 10 bears focused on foraging for grasses and dandelions, makes stopping in this area unsafe for people and wildlife.

“We ask people to comply with the no-stopping zone, to be alert and aware, especially at dusk and dawn,” said Jon Stuart-Smith, a human-wildlife coexistence specialist for Lake Louise, Yoho and Kootenay.

“Despite the current COVID situation, there’s still quite a bit of traffic on that road, and given the number of bears that are there, we decided to implement the no-stopping zone again this year.”

An infamous female grizzly bear that was fed French fries three years ago and is known for walking along the highway jersey barriers, hasn’t been hanging roadside this year.

Known as bear No. 167, she showed up just once alongside Highway 93 South earlier this spring and Parks Canada wildlife experts were quick to haze her away back into the forest.

“She hasn’t been back since and that’s been over a week,” said Stuart-Smith, noting she still has a functioning GPS collar after being captured and collared last spring.

Now about six-and-a-half years old, bear No.167 was fed French Fries several years ago, but is not believed to have been fed human food last year. It is illegal to feed wildlife in national parks.

“I don’t think we had any feeding incidents that we’re aware of last year,” said Stuart-Smith.

“That was a big reason why we had collared her because we wanted to do aversive conditioning on her and keep her away from the road, and reduce the risk of her being fed again and becoming food conditioned.”

The negative experience for bears associated with aversive conditioning can prevent habituation and reduce the chance that bears will learn to seek out food sources near roads, where plants like dandelions flourish in spring.

Repeated exposure to vehicles and people can cause bears to become habituated and lose their natural wariness of humans. Bears that frequent roadsides are also at a greater risk of being struck and killed by passing vehicles.

Stuart-Smith said bear 167’s mother, who now has two two-and-a-half year-old cubs in tow, has been hanging out along this section of highway, as has another female grizzly bear with a two-and-half-year old cub.

“As well as that, there have been two or three other black bears seen in the area, as as well as a female black bear with a young-of last-year cub – so there’s already quite a number of bears,” he said.

Parks Canada and the RCMP are regularly patrolling the no-stopping zone. Penalties for violations range from a $115 on-the-spot fine to a mandatory court appearance and maximum fine of $25,000.

An Edmonton man charged in 2017 for feeding French Fires to grizzly bear No. 167  was slapped with a $2,500 in court, sending a clear message to propel that the courts were taking illegal feeding of wildlife seriously.

“Last year, there was one charge, but lots of written warnings as well.”

The no-stopping zone will remain in place until bears move away from the highway, as food becomes more plentiful at higher elevations.

“There’s still quite a bit of snow because spring is a little bit later than normal,” said Stuart-Smith.

“That can change quickly if things warm up, but we’ve anticipated the no-stopping zone will be in effect for about a month given how we’ve managed it in the past.”

Visitor services remain suspended in Kootenay National Park to help limit the spread of COVID-19. Olive Lake day use area and Cobb Lake Trail are both closed due to bear activity.

Outside of the no-stopping zone, Parks Canada also asks people to consider not stopping for wildlife. If you choose to do so, they advise people to stay inside the vehicle; pull over only if it is safe to do so; pull all four wheels onto the shoulder; give bears more space than you think they need; be aware of the traffic around you, and move along quickly.

“We ask people to be respectful when viewing wildlife,” said Stuart-Smith. “Be respectful of giving wildlife the space they need to do their thing and survive on the landscape.”