Second avalanche fatality in mountain parks in a week

BANFF – A Calgary man has been killed in an avalanche near Egypt Lake in Banff National Park – the second avalanche fatality in the mountain parks in a week.
Mar 18, 2019 11:56 AM By: Cathy Ellis 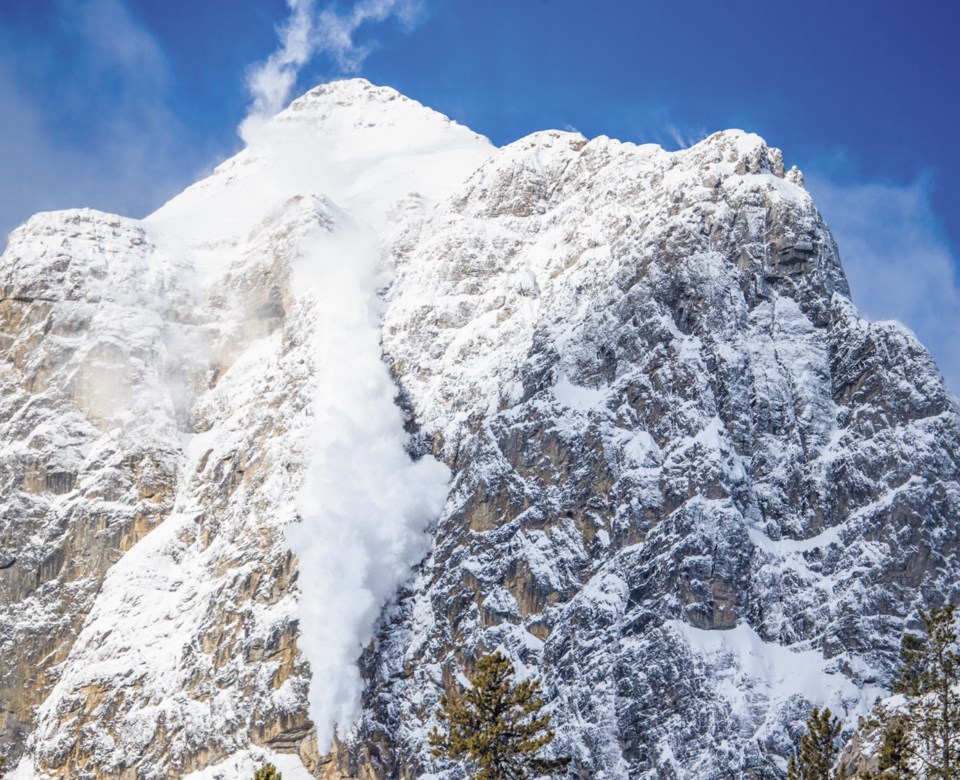 Snow falls from the East End of Rundle during an avalanche. Public safety officials have published a special public avalanche warning due to rising temperatures.

BANFF – A Calgary man has been killed in an avalanche near Egypt Lake in Banff National Park – the second avalanche fatality in the mountain parks in a week.

Banff RCMP said two people were involved in the avalanche Saturday afternoon (March 16) on the slopes above Pharaoh Lake near Egypt Lake – one died later at Mineral Springs Hospital and the other was checked and released.

Lisa Paulson, a visitor safety specialist for Parks Canada, said one of the skiers was able to dig himself out of the size 2.5 avalanche, and then helped dig his friend out. The avalanche danger was rated at high in the alpine at the time.

“When he went to his friend, because of the injuries, he realized they weren’t going to be able to ski out together so he needed to go get help,” Paulson said.

“He did as best he could for making him warm and comfortable and went for help at the shelter at Egypt Lake where people there had a satellite communication device.”

Parks Canada received the alert at 7 p.m., and with very little light left, two park rescuers were flown by Alpine Helicopters directly to the site. With life-threatening injuries, the man, believed to be 32 years old, was taken to Mineral Springs Hospital.

“Sadly, he passed away in hospital,” said Paulson. “Our deepest sympathies are with family and friends.”

Last Monday (March 11), a woman, believed to be in her 30s, was caught in an avalanche near Field and later died of her injuries in Foothills Hospital in Calgary.

The avalanche struck her guided party around 2 p.m. while she was ice climbing on a popular route on Mount Stephen known as Massey’s, located east of Field.

STARS air ambulance transferred her to Calgary in critical, life-threatening condition, however she passed away the following day.

The warning is widespread and applies to all the forecast regions in western Canada.

At issue is the significant warming forecast to hit British Columbia and Alberta this week.

Grant Helgeson, senior avalanche forecaster for Avalanche Canada, said this is the first big warming to hit the snowpack, which is still fairly complex and winter-like.

“Any time the snowpack is hit with a big change, it tends to de-stabilize. The temperatures are forecast to increase substantially this week, with no night-time cooling,” he said in a news release.

“This will weaken the snowpack on all aspects, increasing the possibility of large natural avalanches as well making it easier for the weight of a person to trigger deeper weak layers.”

Local rescuers say rapidly warming daytime temperatures and are causing loose wet avalanches to start by mid-morning, noting some of these are running long distances or triggering slabs along the way.

Paulson said they’ve been closely following the warming forecasted trend and its impact on the snowpack and avalanche conditions.

“The dramatic temperature change we’re seeing is what’s led to the heightened concern,” she said.

“We want to alert people to give pause to where they’re thinking of going and make sure they make safe choices in the upcoming days.”

If heading into the backcountry, Paulson said people must have knowledge and know how to assess avalanche risk.

“That also includes avalanche rescue as well as the need to carry a shovel, probe and transceiver and some form of communication, for example a cellphone or satellite communication device.”

Regional avalanche forecasts can be found at www.avalanche.ca.