BOW VALLEY – The United Conservative Party has thrown out a plan by the former NDP government to create a network of protected parks in Bighorn Country bordering Banff and Jasper national parks.
May 9, 2019 12:00 AM By: Cathy Ellis 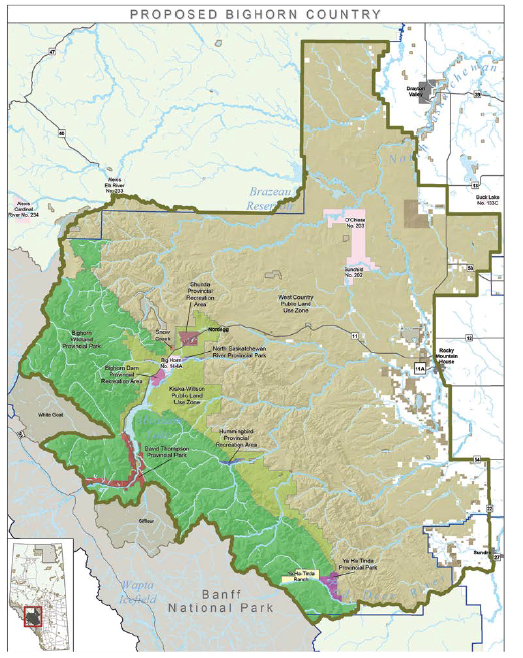 The UCP government officially announced a plans to scrap a proposal to protect 4,000 square kilometres of land – Bighorn Country – in the eastern slopes by the NDP.

BOW VALLEY – The United Conservative Party has thrown out a plan by the former NDP government to create a network of protected parks in Bighorn Country bordering Banff and Jasper national parks.

The NDP had committed $40 million to protection of a 4,000 square kilometre area of the Bighorn – headwaters of great rivers and refuge for species like grizzly bears, wolves, bull trout and bighorn sheep.

Jason Nixon, Alberta’s new environment and parks minister, did not have clear details on any plans the UCP has to protect the Bighorn, noting the area will be looked at in the context of the North Saskatchewan regional planning process.

“We will not be proceeding with the NDP plan,” said Jason Nixon, who is MLA for Rimbey-Rocky Mountain House-Sundre. “We were clear we felt that plan was flawed.”

Many who make their livelihoods in the region voiced concerns about the NDP proposal’s impact on backcountry recreation, oil and gas exploration, forestry, trapping and off-highway vehicle use.

Conservationists, on the other hand, welcomed the proposal to protect the headwaters of the North Saskatchewan River, which provides drinking water to more than a million people, including Edmonton with 88 per cent of its water, as well as sensitive wildlife.

Canmore-based Yellowstone to Yukon (Y2Y) Conservation Initiative said it’s keen to work with the UCP on protection of the area moving forward, noting the science for protection of this area is solid.

“Over 70 per cent supported the Bighorn proposal through a poll done in January of 2019.”

Young said protection of Bighorn Country has been a conservation priority well beyond the four years the NDP was in government.

“As we look into the future, the population is growing and tourism is increasing and climate change is going to change the landscape,” she said.

“It’s going to continue to be an important area that needs attention and protection and we will continue to do what we need to do.”

Nixon said the focus in the coming months would be working with communities and groups on trail maintenance, responsible off-highway vehicle use, safe places to camp, and more enforcement.

“We will be more focused on land use planning in general, and in working with communities in broader consultation to balance the economy, environment and recreation,” he said.