CANMORE – Football Alberta’s coach of the year Wade Buckley won a championship in his final season with the Canmore Wolverines, but the relationships built with players and coaches is what he’ll remember – and miss the most.
0
Jun 27, 2019 6:00 AM By: Jordan Small 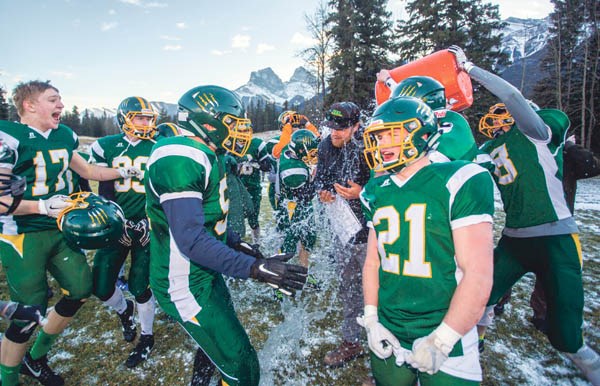 Canmore Wolverines head coach Wade Buckley is soaked post-win at Millennium Field in Canmore on Nov. 10, 2018. The Wolverines won the southern provincial semi-finals on this day and would go on to win the provincial title.

CANMORE – Football Alberta’s coach of the year Wade Buckley won a championship in his final season with the Canmore Wolverines, but the relationships built with players and coaches is what he’ll remember – and miss the most.

Buckley announced he has stepped down as head coach of the high school football club and is relocating to the United States to be with his wife, Alyson, who works at the University of Minnesota’s school of medicine in Minneapolis.

Spencer Rose, the Wolverines defensive coordinator for the past two seasons, was promoted to head coach.

The move came as no surprise to Buckley and those around him. Last August, the couple discussed moving to the U.S. sooner, but Buckley, who teaches at Canmore Collegiate High School (CCHS), was keen on staying one more year in Canmore.

“She was ready to go and I wasn’t quite ready to … I really wanted to do one more season and one more year teaching up here, so I’ve been up here finishing it off, so really, it’s been like the culmination of the process of moving down there,” Buckley said.

Quietly knowing all along that it was his last year on the sidelines, “it made every victory that much sweeter” in the championship season, but leaving behind relationships Buckley shaped with players and coaches over the years will be “tough to say goodbye to,” he said.

“At the end of every single year, I get to give each player a hug and let them know how proud of them I am and that’s going to be really super hard to let go of,” he said. “The things they’re able to accomplish is so awesome to be apart of; winning seasons, losing games, whatever, it doesn’t matter – the character development they’re able to show is something special and I was lucky to be apart of it.”

For a former Wolverine like Holly Phillips, one of the only girls to play on the team, she said even after switching sports – becoming one of Canada’s top U20 rugby players – she was “still his player.”

“Even today, I would still address him as, ‘Hey, coach,’ ” she said. “He’s definitely left a huge mark on not only the high school, but the Bow Valley and for athletes like myself … He taught me so much about confidence and being a woman in sport, even when I was surrounded by these huge, obnoxious cocky big football players in high school when I was 14 years old playing on a boys team. He obviously empowered me, he donated a lot to help me with my rugby career and I’m sure he left his mark on a lot of kids and it’s sad to see him go.”

Buckley said the Wolverines squad is in good hands next season with Rose, who, like Buckley, also played on the Wolverines during his high school years and became a coach after graduating.

“We put it up in the gym last year, that championship banner, so we’d obviously love to repeat that,” Rose said. “For me, obviously it’s big shoes to fill and just calling the games and making some of the decisions … it’s pretty cool taking on more responsibility.

“We’re going to miss Wade. It’s been an honour to coach with him.”

Buckley is proud to have helped create a football culture at CCHS and will be cheering on the green and gold from afar.

“Football wasn’t just a sport that you played from August to November, it was something that people began to identify as a football player,” Buckley said. “It was one of the premier sports by the time that I’m leaving, I think we really brought the success of it full circle.”