Two Eagles games have been cancelled due to a positive COVID-19 case on the team with the possibility of more cancellations in December
Nov 19, 2020 5:00 PM By: Jordan Small 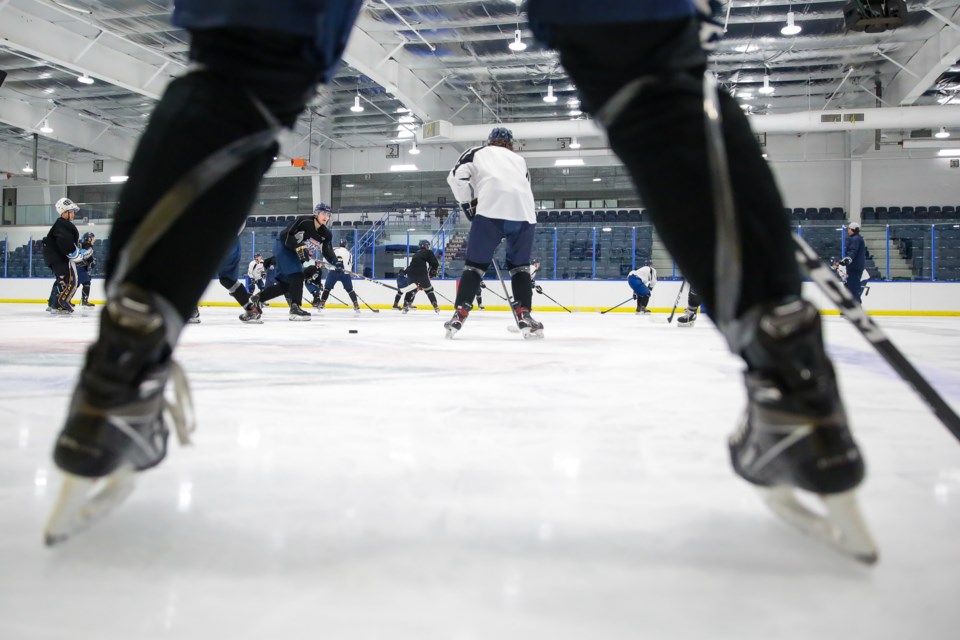 The Canmore Eagles in a practice during the team's training camp at the Canmore Recreation Centre in October 2020. EVAN BUHLER RMO PHOTO

CANMORE – The Canmore Eagles will have fewer games this season after one player tested positive for COVID-19.

On Thursday (Nov. 19), the AJHL announced the positive case and as a result the local junior A club is in mandatory quarantine while waiting for further test results to return.

"We had some players showing some symptoms throughout the week as well and we isolated them," said Andrew Milne, Canmore Eagles head coach and general manager.

"I think this is inevitable that we're going to see this the entire way through [the season with each AJHL team]."

A member of the AJHL's Canmore Eagles has tested positive for COVID-19. The team will activate the required AHS protocols. The League schedule will be adjusted as required. For privacy reasons, no further comments will be provide pic.twitter.com/dyV2Snzl4D

As of Thursday, there were 78 confirmed cases of COVID-19 in Banff, and 21 in Canmore.

Milne said the player showed symptoms on the bus ride home after last Saturday's (Nov. 14) away game against Drumheller. The player was tested Tuesday (Nov. 17) and results returned Thursday.

After a positive test from an AJHL player or club member in close contact, the team must isolate for 14 days and get tested. Any games scheduled during the two-week period the team is isolating are cancelled and there likely won't be makeup games. The league will likely move towards a winning percentage overall to determine standings for an already shortened 32-game 2020-21 season.

The Drumheller Dragons, which played the Eagles from Nov. 13-14, are also in two-week isolation.

The earliest the Eagles can return to the ice is Nov. 28. However, if more members test positive, the team would return Dec. 2, which might result in further game cancellations.

"Safety is a big part of this," said Milne."If we have to isolate until Wednesday (Dec. 2), I think it will be very difficult for us to practice Thursday and then play the following day after two weeks off.

"So I would imagine that would be a discussion we have with the league. Right now, based on one positive result, we're isolating until Nov. 28, so that gives us a week of practice before the Olds games, which is probably enough."

At the Canmore Recreation Centre, where the Eagles play and practice, a COVID-19 Rapid Response Plan has been activated due to the Eagles home game on Nov. 13 and an unrelated positive case from a participant of the Canmore Minor Hockey Association attending practice at the rec centre on Monday (Nov. 16).

"We are following the steps in our plan which include a re-sanitization of the publicly affected areas in the facility; Contacting all patrons and staff who were in the facility at the time, as well as regular facility user groups, [and] Working to support CMHA, the Canmore Eagles, and Alberta Health Services if there are additional measures that need to be taken," said the Town of Canmore in a social media post.

The Town of Canmore has activated its COVID-19 Rapid Response Plan as a result of a confirmed case of COVID-19 from a...