Consistency is great, but Canmore’s Erik Read is turning focus to podiums 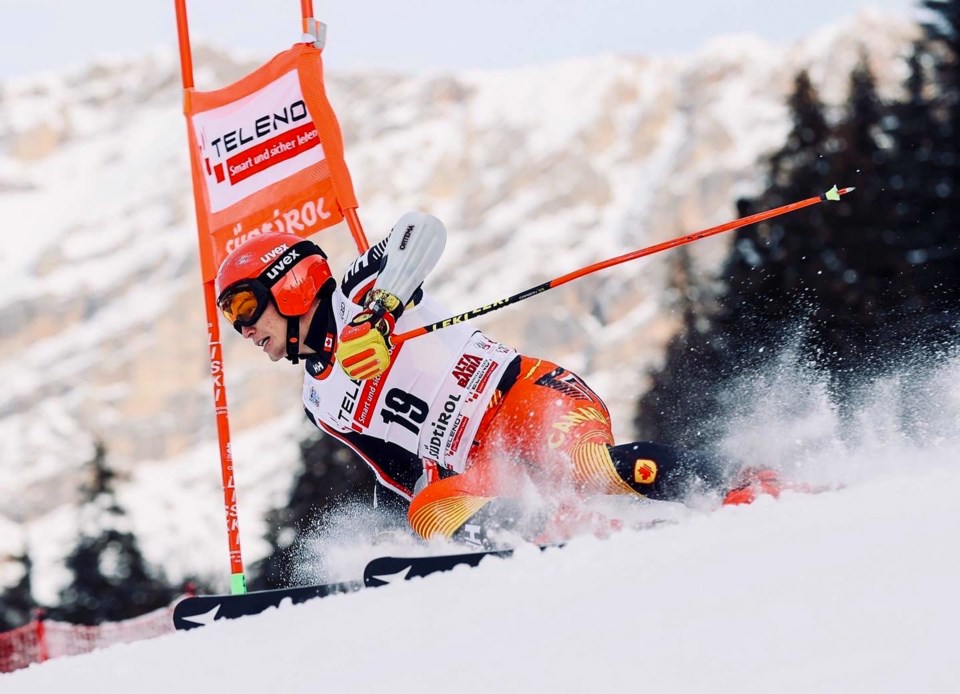 SWITZERLAND – Flying down the slopes at over 50 km per hour, the utter eeriness of competing during the pandemic finally caught up with world cup contender Erik Read.

The 2018 Olympian from Canmore has racked up world cup points in slalom and giant slalom (GS) since the tour started in October, and he's committed to staying in Europe until at least March.

But despite the strangeness of it all, despite COVID-19 protocols, empty airports and having to keep a tight circle, it all really hasn't hit home for Read until his recent races in Adelboden, Switzerland, known for its big event feel and rambunctious fans.

Just as Read rocketed over the finish line in a top-20 spot, everything about it seemed off.

“It was totally bizarre because they didn’t have any music, didn’t have much of a commentator, and that pitch at the bottom is so famous for breaking over and you have the sea of Swiss flags waving for every racer, they’re quite respectful in that sense,” said Read.

“For me, that moment was were things are different right now.”

Erik Read lead the #CANskiteam into the first GS race this morning with a 16th place finish. See you tomorrow for round ✌️ of what some say is the world’s most challenging GS. Get your coffee ready 🇨🇦, watch it all on https://t.co/qCvJXGM48A !
💻https://t.co/JjMulvspJE
📸GEPA pic.twitter.com/miq2lrc8L5

Cheering fans or not, it doesn’t factor into a well-oiled alpine skier's performance, but the absent hum and electricity is noticeable out there.

The feeling of it being a “different world than other years" continued during the Swiss event, when Read had a feather-in-the-cap moment.

For the first time ever, the Canuck participated in a bib draw, in which the best 10 present competitors of the upcoming event choose their bibs between one and 19, odd-numbered only.

Under normal circumstances, the bib draw is not only a chance to get an advantage in picking your higher starting spot – a 10th ranked skier could select the first starting bib, for example – but it’s usually a lively public event with heartening fans and the media's cameras rolling, giving lesser known athletes a chance to showcase themselves outside of racing.

This season, things are understandably scaled way back, but it didn't make the moment any less special for Read.

“Even if there wasn’t fans or the actual drawing of the bib, it’s still cool to be part of that, as far as the next steps of progressing forward,” said Read.

“For me, to step into that group is awesome and hopefully I can show my bib up to the camera at some point this year.”

Over five days (Jan. 6-10), Read had four races in two countries to start the new year. First up, Read secured world cup points with a 25th place in slalom in Zagreb, Croatia.

Following that, the world cup headed over to the mountainous Switzerland, where Read was inked in for three races in slalom and GS, scoring a 16th, 13th, and he didn't finish his final race.

It’s an exhausting five-day stretch, and Read felt lukewarm on his performances.

This season, he’s mostly sat in the top 10-20 range, which was highlighted with a 10th overall and a scorching fast second run at Santa Caterina Valfurva, Italy last December.

It’s consistent racing, and contenders need that, but Read wants to turn up the dial and prove he belongs at the bib draws with fans and cameras.

“I’m definitely at a point now where I really want to push for that podium,” Read said.

“I’m happy in those [top 10-20 results in that] sense, but I do feel like I have more potential and my expectations are peaking, so I’m aiming higher.”

Over the next two weeks, Read has a few stops on the world cup circuit before the start of the world championships, the most important races of the year.

And after two DNFs in 2019, there's reason to expect more this time.

"I know I got work to do there," Read said. "It's all about dialling in those last few [world cup] runs, so when I push out the gate, I'm  not questioning anything."