Eagles mauled by Kodiaks in game seven, eliminated from playoffs

The Canmore Eagles were eliminated from the AJHL playoffs by the Camrose Kodiaks in the sudden-death game seven matchup Wednesday night (March 11)
0
Mar 11, 2020 9:55 PM By: Evan Buhler 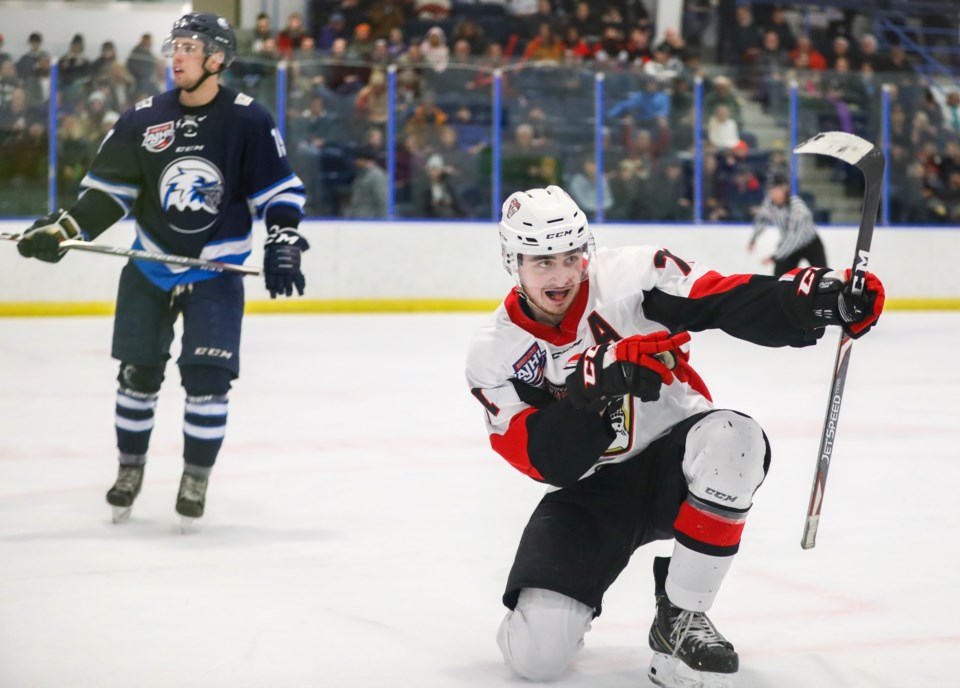 Canmore Eagles Ethan Schaeffer reacts as the Camrose Kodiaks Damon Zimmer celebrates a goal. The Kodiaks defeated Canmore in game seven of the opening round of the AJHL playoffs. RMO FILE RMO PHOTO⁠

CAMROSE – The Canmore Eagles were shown the exit door from the AJHL playoffs after a dominant performance by the Camrose Kodiaks in game seven.

The 8-2 win for the Kodiaks, punched the team’s ticket to the second round of the playoffs against the Okotoks Oilers.

It was a shaky start to for the Eagles in the do-or-die game against the Kodiaks in Camrose on Wednesday (March 11).

There were two changes to the Eagles’ lineup from game six, as Tristan Kimmen was swapped for Tristan Zandee. Tayler Miller, who was injured, was replaced by Zach Cunningham, who returned to the lineup after serving a two-game suspension.

Just over two minutes into the opening frame, the Kodiaks’ leading goal scorer, Cody Laskosky, beat Eagles starter Kadin Kilpatrick on from a tight angle shot from the half boards.

The Eagles looked tense in the opening period, but gained some composure on the team’s first man advantage, and eventually matched the Kodiaks intensity.

An un-timely giveaway in front of Kilpatrick led to a second goal for the Kodiaks, as Laskosky jumped on the loose puck finding Eric Miller for his first of the series.

The Kodiaks continued to pressure the Eagles in the second and the forecheck paid off, as the hosts doubled their first period scoreline before the Eagles Zach Carlson scored a powerplay goal cutting the lead to 4-1. Camrose answered back to restore their four goal lead with just 13 seconds left in the second.

With the game all but decided with 10 minutes remaining in the game, frustration started to creep into the Eagles bench.

The visitors began to loose composure, starting scuffles after the whistle. Despite the lopsided score, the Eagles still managed to outshoot the Kodiaks.

Turnovers hurt the Eagles early on in the game, as three of the first four goals scored were the result of turnovers.