Cancellations, modifications, and what in-person sporting events are tentatively booked for this summer and fall in the Bow Valley.
Apr 1, 2021 2:00 PM By: Jordan Small 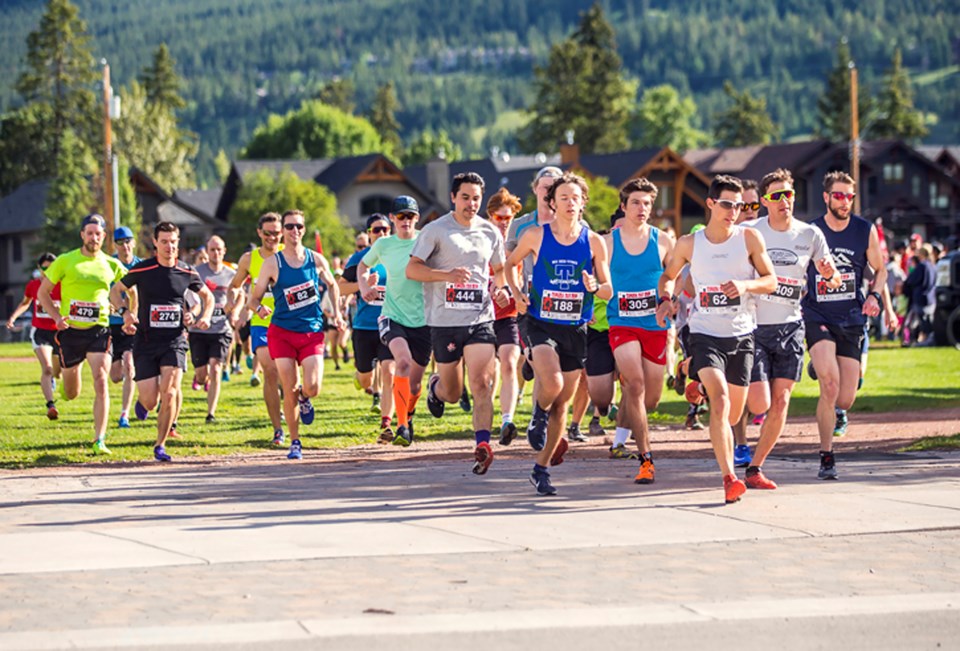 Runners take off from the start line in the annual Canada Day Fun Run at Centennial Park in Canmore. RMO FILE PHOTO

BOW VALLEY – As warmer weather begins to tease the Bow Valley, local sporting event companies are figuring out the logistics for a safe return to in-person races.

But a glaring centre of focus are restrictions, which has some local organizers opting out of hosting events, while others tentatively set dates for fan-favourite competitions.

Grizzly Mountain Event’s (GME) organizer Tony Smith said it's "risky," but plans are in the works for the ultra marathon and relay on Oct. 10 at the Canmore Nordic Centre.

“From my standing point, there would be nothing better to celebrate Thanksgiving Weekend and get back on track,” said Smith.

If approved, the trail running race would be GME's first event in two years and mark the 10th anniversary of the ultra marathon; something Smith says would be a “dream come true."

The ultra marathon and relay is GME’s only competition on the calendar this year following the cancellations of its summer lineup, which includes Open Water Swim, KCPO SUP CUP, and the XTERRA and road triathlons. All require the use of Quarry Lake.

It can take up to six months to plan events, and due to the current state of health and safety guidelines in Alberta, it wasn’t worth the risk or financial investment to host the summer events, said Smith.

“With so much uncertainty, I’ve kind of run out of lead time to be prepared for July and August,” said Smith. “And also, I’ve lost so much money in the last year, I can’t afford to gamble on spending anymore money on events that may or may not receive permission from the government.”

The fate of Canmore's Canada Day Fun Run will be discussed at the next meeting of its organizers, the Canmore Nordic Ski Club (CNSC). As of now, the July 1 fun-run has a 50 per cent chance of happening in some capacity, according to CNSC.

The Rocky Mountain Soap Women's Walk & Run postponed its May 29-30 event, although, the company is keeping an eye on opportunities later this year.

The Banff Marathon, Half Marathon and 10K switched its early summer date in June in favour of Sept. 12 for a better chance at having mass-participation approved.

Melissa’s Road Race, also organized by the same group behind Banff Marathon, tentatively inked in the popular Banff race for Sept. 25, as well.

Trail running company, 5 Peaks Adventures is attempting to host events on June 5 and Sept. 11 at the Canmore Nordic Centre.

Should local or provincial regulations interfere, 5 Peaks would switch to virtual races, according to its website.

Plaid Goat, a multi-day mountain bike festival in Canmore, cancelled its July event and will return in 2022.

However, organizer Wanda Bogdane said a modified version of the jump jam is tentatively booked for June 19 and will take place at an indoor facility.

In addition, Plaid Goat is offering a virtual speaker series starting this month similar to what was offered at the annual event, including a discussion on the provincial trail builders association, and an introduction to mountain biking in Alberta.

"As always, we commit to rider safety first and foremost, and will take all required COVID-19 precautions, including a host of optional scenarios that work within the provincial guidelines," Bogdane wrote in an email. "This may include no spectators, masks worn while riding, and other safety provisions. If we are able to hold the event safely, we will proceed. If not, we will defer the Jump Jam to a different date."

With the uncertainty of what restrictions will be in place, a provincial endurance sports group is lobbying the government of Alberta to allow mass participation at events.

Alberta Ultra Racing Association (AURA) has pointed toward the success ski hills have had being open during the pandemic, and believes many sports companies won't survive a second year of cancellations.

"As industry professionals, we believe it is practical to resume outdoor endurance events, at near-normal attendance levels, with specific safety precautions in place," AURA stated. "After close to a year of COVID-19 measures, we now have a greater body of data that should allow the government of Alberta to begin segmenting by industry and activity type, instead of implementing blanket restrictions that cover broad sectors.

"The guidelines for event directors will change with growing public immunity, the proliferation of vaccines, rapid testing, and improved treatments as they evolve."