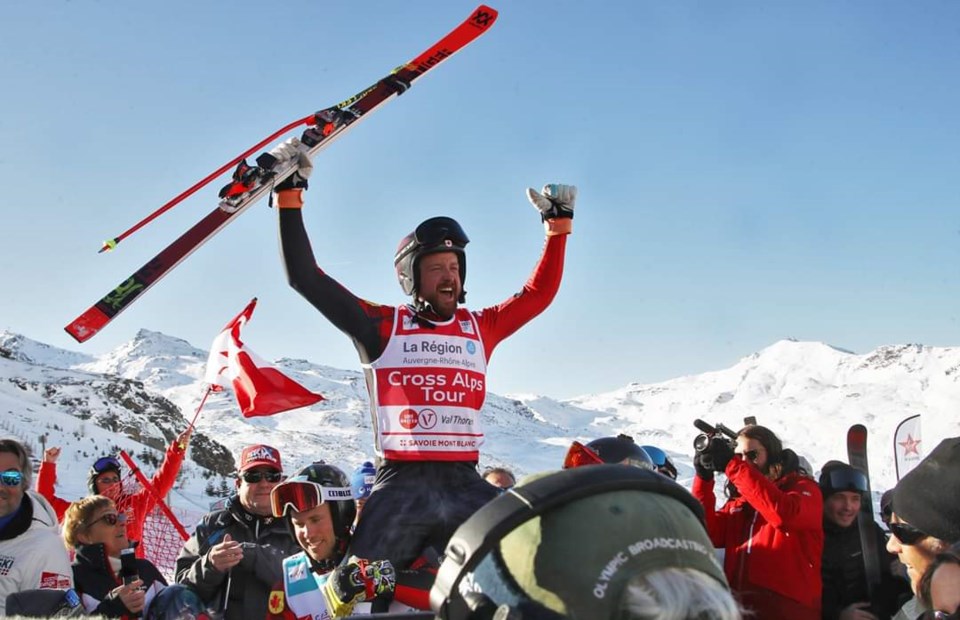 The Canmore product edged out a pair of French skiers, Bastien Midol and Jean Fredric Chapuis, at the famed French ski resort. The previous day, Mahler finished at a then career best sixth place, while his teammate Kevin Drury stood on the top of the podium.

“It’s been a whirlwind of emotions,” said Mahler.

“This has been a dream of mine, and I’m still trying to realize what happened – it’s more than I expected. I was just trying to build on the emotions of the day before.”

On the chairlift up the hill, before making an appearance in his first career big final, Mahler recalls feeling very calm and practicing breathing exercises.

“I knew I had to focus on getting a good start and after that it was no longer a physical game, but a mental one,” said the 24-year-old.

Mahler described crossing the line to the sound of cheers, chainsaws and fireworks as a moment he will never forget. His Canadian teammates rushed to the finish to congratulate him, something Mahler said he has never seen in all his years of racing.

“It was fantastic to share this win with everyone because we have all gone through injuries and comeback to ski. Unfortunately injuries are inevitable, but I think everyone can relate to what I went through in their own way.”

What makes Mahler’s win more impressive is that fact that he only returned to snow this past August after a lengthy two year recovery process. He battled through three separate injuries during that time.

After suffering a horrific season ending shoulder dislocation at a race in Italy in 2017, Mahler returned to races the following season in a bid to qualify for the Olympics.

In that push to qualify, he suffered an injury to his knee but continued to race. He continued to ski, but wasn’t getting the results he wanted.

Mahler knew something was seriously wrong in his knee after skiing as a forerunner in the 2018 Pyeongchang Olympics. Upon receiving an MRI, Mahler learned he had suffered a partial tear of his ACL.

Within two weeks, Mahler was back on the operating table of Banff's Dr. Mark Heard, who performed his shoulder surgery.

“I made the conscious choice not to push myself. The typical recovery time for an ACL is nine months. After doing a lot of my own research, I decided to take off the full season and tick all the boxes before starting to race again,” Mahler said.

With the support of Mahler’s parents, teammates, sponsors, rehab specialists and physical trainers, he was looking to return on schedule, but the discovery of a blood clot in his other shoulder put a wrench in those plans. He recalls experiencing intense pain in his arm and loosing grip strength.

“The clot was caused by the new muscle tone in my shoulder so I was put on a high dosage of blood thinners, which put my recovery back. Maybe it was a blessing in disguise.”

The blood clot gave Mahler more time to recover and strengthen his rebuilt knee, and he returned to the ski tracks in August of this year, training in Australia.

After rejoining the team and training in Switzerland and throughout Europe in the lead up to the start of the season in France, Mahler says he talked often with his coaches about his expectations for the season.

“My expectations were a little bit up in the air, I didn’t really really know what to expect. I did know that by the end of the season I wanted to improve on my best result, which before this weekend was seventh.”

He said after his impressive comeback over the weekend, he is not adjusting his expectations.

“I just want to continue to ski at a competitive level and stay healthy. Anyone in the top 32 can win on any day, so I just have to continue to ski tactically well. What I learned during the past two years is that it’s not about the big gains, but about all the small steps and the day-to-day process.”

Mahler and the Canadian ski cross team will take to the slopes of Montafon, Austria this weekend.

On Jan. 17-18 the ski cross World Cup will come to Nakiska, the only stop in North America.