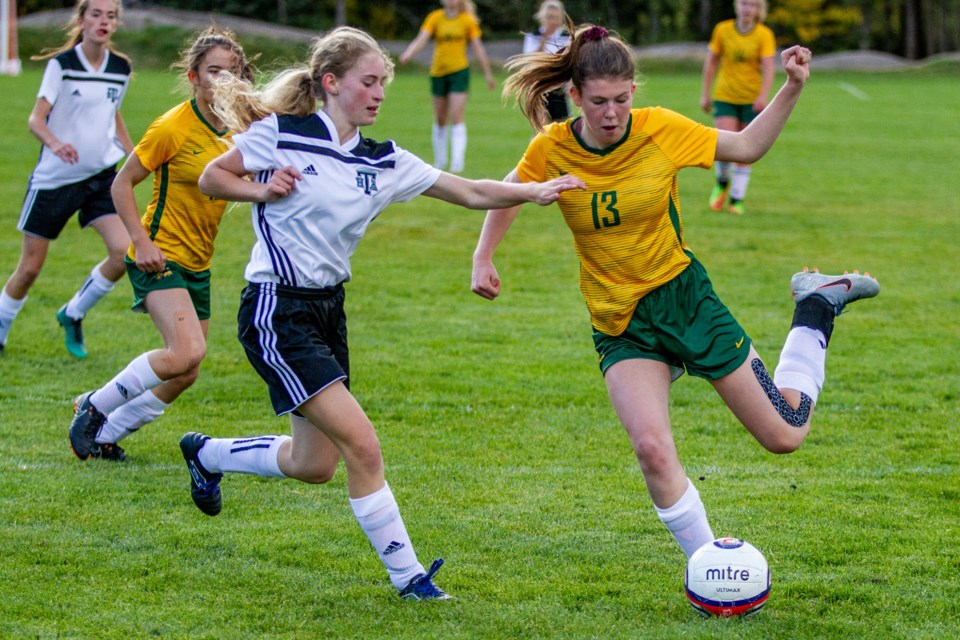 CANMORE – After a rebuilding year, the Canmore Collegiate Wolverines' soccer girls will have a shot at third place in their division.

The play-off game is scheduled for Thursday afternoon (Oct. 10) at 4:30 p.m. at Millennium Park against Strathmore, weather depending.

“At this point it is all up to mother nature. October is not an easy time to play soccer in the Bow Valley,” said Wolverines head coach Jason Thompson.

Thompson said after a couple of difficult losses he decided to change up their system.

“We switched from a diamond formation to a more classic 3-4-4 formation. We saw a big improvement across the whole field,” said Thompson.

The switch paid off and Canmore trounced Strathmore 8-1. The win secured home field advantage in the contest for third place.

"Playing with a strong wall of four in the back made it possible for us to play most of the game in their half. This also helped our midfield because they could push in and really attack the net. We have seen this formation used against us in the past and it works really well," said Wolverines defender Anika Gasser.

The Wolverines have had Strathmore’s number this year, defeating the team earlier in the season 2-1.

Despite a pair of wins against Strathmore, Thompson said his side has to remain on its toes.

“We have had two very different games against the Spartans, so the game Thursday will be down to which team decides to show up.”

Thompson and Gasser agree the morale boost of Canmore's most recent win will be something to build off.

"I am really proud of all the Grade 9s and 10s because they really stepped up this game. They played with urgency and passion. For our upcoming game, we need to bring that same mindset, and I think that we can have some really great outcomes if we play with the same intensity," Gasser said.

If the game is cancelled due to weather it will be rescheduled for the followwing Thusday (Oct. 17).

"The descion about the game will be made by 1 p.m. on Thursday. I have literally shovelled snow off the field in the past, so we are eager to see what will happen." Thompson said.

Following the playoff match, the Wolveriens will look to prepare for the zone championship, which will kick off on Oct.18, in Cochrane.