BIGHORN – Residents of Exshaw raised concerns recently around a proposed new residential development that is being put forward for the hamlet.
0
Jun 27, 2019 12:00 AM By: Jenna Dulewich 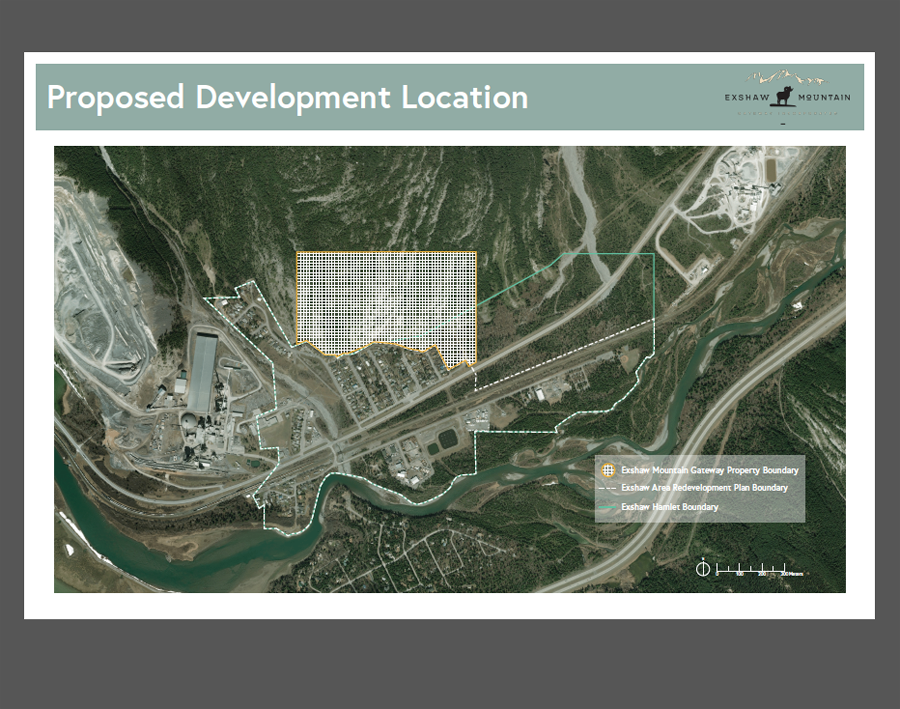 Exshaw Mountain Gateway Inc. is proposing residential development for the hamlet of Exshaw.

BIGHORN – Residents of Exshaw raised concerns recently around a proposed new residential development that is being put forward for the hamlet.

Residents were asked questions through a survey, like would they support the economic diversification of Exshaw and promote local low-volume tourism initiatives, at a recent open house for the proposed development in the north and east side of the community.

Developers with Exshaw Mountain Gateway Inc. Lindsay Vivers and Jason Hoerle were in attendance to answer questions on the potential build out, which could be in the range of 25-40 lots.

More than 70 residents attended the open house out of the 400 that call Exshaw home and many questioned the developers about the concepts being put forward for consideration. That included concerns around how additional parking would be accommodated, how wastewater would be dealt with, if the current drinking water could sustain additional residents, what the human and wildlife interface planning would look like, as well concerns about additional tourism.

“I’ve been in the Bow Valley for a couple of decades and I left Banff and Canmore because of [build out]. That is why I moved to Exshaw,” one resident commented.

Exshaw was established in the 1900s as a company settlement for mining and industry workers. MD of Bighorn Reeve Dene Cooper said the community was one of the communities that grew organically, adding one house at a time.

The last and only significant area structure plan development in the hamlet was the townhouses on Windridge Road, which took place approximately a decade and a half ago.

Now with Exshaw Mountain Gateway Inc. owners scoping out land in the north and east side of the hamlet, the wife and husband duo said they want to hear what the residents want before moving forward with their area structure plan (ASP) application.

Designs shown at the open house were conceptual, Hoerle said and he wants to ensure the public understands there is still an ASP process for them to go through before any approval from the MD happens.

“The lot configurations, dimensions, prices and zoning are all to be announced with public engagement and the MD of Bighorn consultation, review and approvals,” he said.

“It was really important to us being locals that we listen to what the community wanted and get a collective vision of what they wanted for the future of Exshaw,” Vivers said.

“So their feedback is really important to us and we are going to base our development on what the local people envision for the future.”

The developers brought posters showcasing the proposed development location, the preliminary subdivision layout, the development idea, proposed housing types, a list of background studies and local partners, and two ideas for discussion including solar generation and via ferrata, a protected climbing route with a steel cables running along a route that is fixed to a rock.

One resident said they enjoy what they have in the hamlet and seeing the development designs made them “nervous.”

“What is your vision – high density or keep a quiet hamlet?” he asked.

The developers noted they don’t want to change the essence of Exshaw and that is why they hosted the open house asking for feedback, being locals to the valley themselves.

“We want to start with a clean slate, start from zero basically and learn more in our engagement process before we submit documents to the MD,” Vivers said.

The online survey is available at www.surveymonkey.com/r/7W3S5CM.