Are you afraid of evil?

STONEY NAKODA – It’s only natural to feel cold shivers of foreboding travel down your spine when in the presence of evil, and Fright House Morley wants to leave guests shaking, beginning on Oct. 12.
0
Oct 4, 2018 12:00 AM By: Brandon Wilson 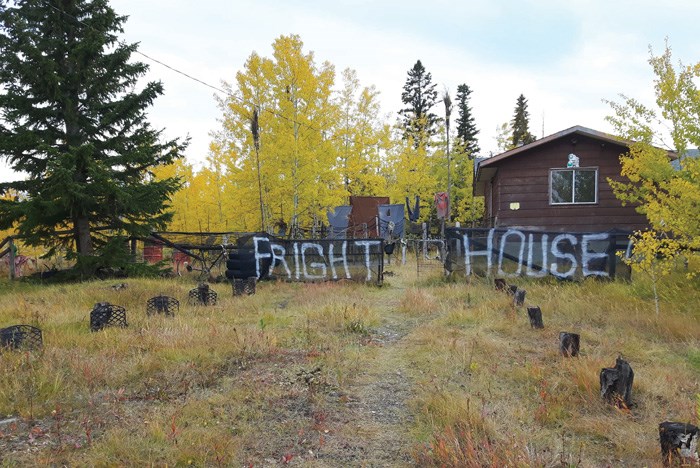 The Morley Fright House, which is celebrating its 20 year anniversary this fall. This year’s theme is The Witches Cabin.

STONEY NAKODA – It’s only natural to feel cold shivers of foreboding travel down your spine when in the presence of evil, and Fright House Morley wants to leave guests shaking, beginning on Oct. 12.

Located two kilometres south of Stoney Nakoda Resort and Casino, the fright house is celebrating its 20th anniversary of delivering scares and fun to all its guests. The event began in 1998 in a house that has a history of terrifying its residents.

The house where Fright House Morley is located was first built in 1981, according to operator Daxter Amos. He says since it was first opened people have been quick to move out, reporting the presence of spirits in the house.

“What sparked this whole event was everyone had their own haunted stories from this place,” said Amos. “No one has ever lasted that long staying here.

“They believe there is an old burial ground behind these woods because they would find old crosses. When they were building a fence, they pierced through what they believed was an old coffin.”

From the stories he was told, Amos created the rooms of the fright house. Each room has a specific theme and legend associated with it, with a paragraph of writing explaining where the stories come from and what haunted horrors were experienced in the house.

“This year we have the Witch Cabin experience. It’s all about the witchcraft and witch stories and that type of theme.”

One of the rooms in the cabin is called the possession room, a room where a tall white spirit with glowing snow-white eyes and teeth lives. It was reported to be the place where an exorcism took place once.

Amos’ grandparents lived in the house at one point and, according to him, they could hear the tapping of shoes on floorboards in the middle of the night. They moved into a new house as soon as one became available.

“When we build things at night here, we hear things,” said Amos. “The whole idea comes from the stories that people share, and we thought it would be a fun idea to turn that into a haunted house for the fall season.”

Although the house is already terrifying enough, Amos plans to grow a corn maze and expand it even more next year. The house is put together with a crew of 25 people, with 10 members of the cast helping to provide terrors.

It’s not recommended for children under 10 to attend the fright house most nights. The opening on Oct. 20 is a family day, with pumpkin carving and a more family-friendly experience.