BANFF – Translating the experiences of LGBTQ individuals into narratives that could be immediately understood by society as a whole was at the heart of a new art installation at the Banff Centre.
May 10, 2019 12:46 PM By: Aryn Toombs 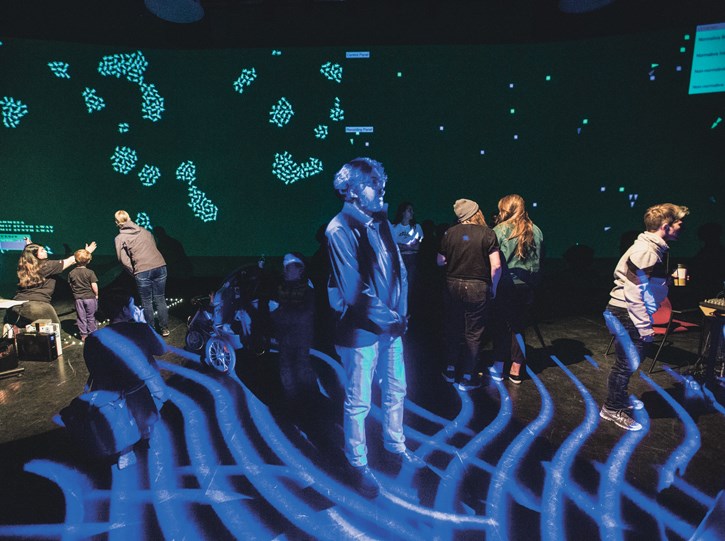 Pratim Sengupta, centre, research chair of STEM education stands in the centre of the Flocking Stories visual installation at the Banff Centre on Friday (April 26). The Flocking Stories team completed a world’s first at the centre, translating queer and trans narratives into visual displays. The code behind the installation will be open sourced for GSAs across the province to use to tell their own stories.

BANFF – Translating the experiences of LGBTQ individuals into narratives that could be immediately understood by society as a whole was at the heart of a new art installation at the Banff Centre.

Utilizing flocking algorithms – which move “boids” throughout a virtual space in a manner similar to the flight of a flock of birds – computer scientists and artists from the University of Calgary turned those experiences into a visual demonstration of “non-normative” experiences titled Flocking Stories.

“Literally you’re seeing the first ever translation of experiences,” said Pratim Sengupta, research chair of STEM education and learning sciences at the University of Calgary.

“No one has ever tried to do this before.”

Members of the team interviewed local queer and transgender individuals, and then used those recordings to influence the behaviour of the boids.

These experiences were contrasted with a standard implementation of the boid algorithm, first developed in the 1980s, to show what the Flocking Stories team calls normative experiences.

LGBTQ boids moved faster and closer together when grouped with like, but became slower and broke off when they encountered the normative boids.

“That’s actually modeled on reality where you’re constantly having to justify your existence,” said Sengupta.

The hope for the installation is to begin conversations about what it means to be LGBTQ in society through the visual movement of the boids.

“The bigger metaphor we wanted to illustrate is listening together,” he said.

“When we have a queer experience or a trans experience that is really marginalized we often tend to not to speak up and the closet is alive and well.”

The team is planning on open sourcing the code developed at the Banff Centre, providing high school and university GSAs in Alberta the opportunity to translate their own experiences into visual stories.

“In about two years, I bet this work will have very different ways of coding the stories like semantics or emotion,” said Sengupta.

“We began with thinking about modelling complex systems with a set of simple rules that each of these flocking boids follows creates emergent behaviours,” they said during the launch of Flocking Birds.