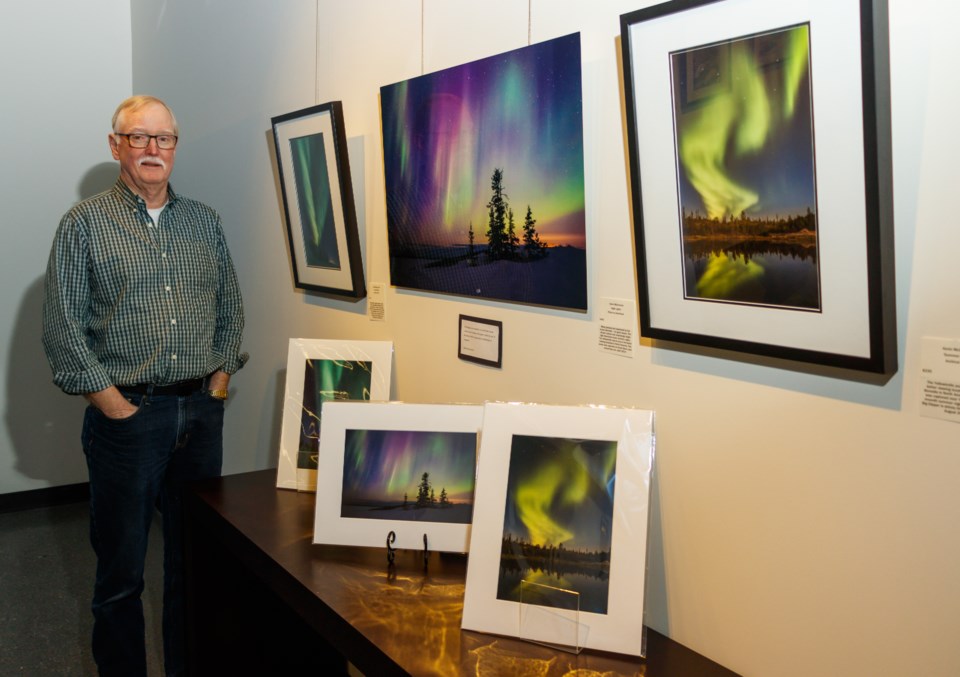 CANMORE – Capturing the serene beauty of the winter, the Canmore Art Guild Gallery is hosting its next exhibit – Northern Exposure.

Kevin McCormick’s photographs of the northern lights dancing in the skies of Yellowknife are featured in the exhibit along with other pieces by Canmore Art Guild members.

“The timing is right for Northern Exposure," McCormick said with a laugh. "We didn’t order up these temperatures, but that came as well."

McCormick lived in Yellowknife for 30 years before moving to Canmore and his images capture the vibrant colours of the northern lights from 2011-14. He began to explore the world through the lens of his camera as he neared retirement.

“When they’re [the northern lights] that visible and that common, you really want to grab that photo when you have the chance,” McCormick said. “[They’re] fantastic and mesmerizing – it’s kind of otherworldly.”

Yellowknife is one of the best places to view the aurora in North America and it was an incredible experience being able to watch the lights twinkle and dart across the night sky.

In general, the northern lights are quiet, simmering with colours that include greens and yellows, he said, but on the more wild nights, the aurora explodes transforming the sky with vivacious magentas.

“I remember one particular night in February 2014 shortly before we came down [to Canmore], they were so wild I just quit taking pictures and I lay in a snowbank and watched them,” McCormick said. “They’re pretty amazing.”

The photographer has a passion for the outdoors and wildlife, he said, and the lights only added to his love of exploring natural landscapes.

McCormick said it can prove challenging capturing the experience of watching the northern lights in a photo. When he clicks the shutter of the camera the goal is to compose an image that shows how the aurora plays off the environment.

“Depending on the conditions if you exposure it [the shutter] too long you’re going to get a lot of motion – that can be good or bad,” McCormick said.

His favourite time of year to photograph the lights is between September and October before the lakes freeze over so his images capture the aurora reflecting on the water adding another dimension to his compositions.

Each night featured incredible magical moments, he said. One of his favourite stories involves a quiet night and an unexpected visitor making an appearance.

“All of a sudden a dog team went by beside me, they were in the still of the night and it was pitch black,” McCormick said. “I never heard them coming. It was just one of those experiences that you see in the middle of the night.”

His photos were a great fit for the Northern Exposure exhibit because of their association with winter and the longest nights of the year, he said, although the aurora can appear at any time of year.

The show marks the first time he has shown a collection of his photos in a gallery.

“Taking them is kind of a personal experience … but, it’s all about sharing them,” McCormick said. “It’s a chance to let other people see them, other people enjoy them.”

McCormick’s photos will be on display at the Canmore Art Guild Gallery until Tuesday, Jan.  28.