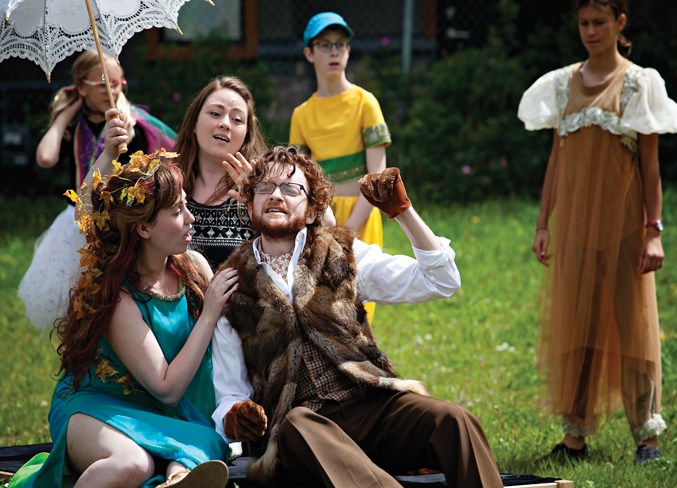 CANMORE – After a successful debut year in 2018, the Canmore Summer Theatre Festival is back for another year.

“One of the reasons we chose these two plays is because it’s outdoor theatre in Canmore. We have a beautiful outdoor area obviously here,” he said.

“These are two plays that take place in the forest and they are perfect for characters interacting with real trees and not fake ones.”

Despite its long history in theatre, A Midsummer Night’s Dream and Robin Hood: Prince of Outlaws still remain relevant today, according to Williams.

“It’s funny because Robin Hood has always been a play that has been carried out throughout the ages,” Williams said.

“Everyone kind of knows the story of Robin Hood. It’s the classic folklore, it’s a story that’s been passed down for probably thousands and thousands of years.”

In this year’s Canmore Summer Theatre Festival, Williams ensured to keep the major themes of the story alive, like helping out humankind and remaining selfless in life. He also wanted to add the group’s own interpretation of the play.

Similarly, the Shakespearian classic, A Midsummer Night’s Dream, with its first performance back in the early 17th century, its themes on relationships remain relevant even today. However, the challenge with Shakespeare is that language is not always easy to follow.

“When you read Shakespeare’s text, like when you’re reading it as someone who is kind of new to it, it’s really hard to understand,” Williams said.

“But if you see it paired with actors who know what they’re doing and have gone through that process of trying to figure out and learn what exactly this line means … everything was done for a reason when Shakespeare was writing it [and] it makes it really easy for the audience to read it and follow along.”

The Canmore Summer Theatre Festival also provides a great mentorship for participating actors and actresses. With a diverse age group of 32 performers from the Bow Valley, the cast of both productions is able to learn a lot from each other.

Tyler McClaron is the assistant director of A Midsummer Night’s Dream, actor in both plays and acting mentor in the festival.

“Sometimes when people are a little bit more seasoned they bring more of that ability to do well and to give the emotion that they want to the audience, but that freshness that comes from being a new actor can only help to make everybody’s performances more vibrant, I would say,” McClaron said.

The mentorship program is not only beneficial to new actors, but even for actors with years of experience.

“I think it’s always important that learning is an aspect of the theatre,” McClaron said.

Pine Tree Players, a non-profit of almost 40 years, has been an integral part of Canmore’s theatre community. Within the past couple years, theatre has been growing more and more in Canmore.

“All of a sudden this community has become like a theatre community … We are quite a budding, thriving community theatre scene. I think our Summer Theatre Festival, within two years has become a staple,” Williams said.

Running July 10th to July 21st from Thursdays to Saturdays, Robin Hood: Prince of Outlaws will play at the Stan Rogers Memorial Stage as a matinee show at 1 p.m. Later in the evening, A Midsummer Night’s Dream will be onstage at 7 p.m.