BANFF – Another year of fantastic writing and beautifully composed photography aiming to showcase the alluring elegance of the place we live is ready to be devoured once more.
Apr 25, 2019 12:05 AM By: Alana MacLeod 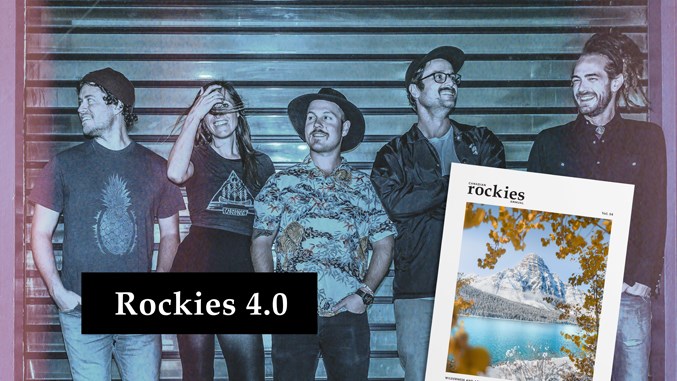 BANFF – Another year of fantastic writing and beautifully composed photography aiming to showcase the alluring elegance of the place we live is ready to be devoured once more.

Canadian Annual Rockies magazine has released its fourth edition, Rockies 4.0, and is getting prepped for its official launch coming up on May 2.

To be held at Wild Bills in Banff, Meghan Ward, editor and co-founder of Rockies 4.0, said she’s very excited about what this years launch has to offer.

“This is our fourth annual Rockies launch party … It’s been a very popular event for three years running,” she said.

“We’re bringing in Shred Kelly this year as our main entertainment – they are a favourite around the Bow Valley … I’ve never seen a crowd as energized as when they get rocking.”

Ward said on top of the band, the first 100 ticket holders through the door would receive swag bags with around $150 in value. Not to mention, every attendee will be given a copy of the magazine to take home.

“People frequently ask us why we don’t publish more than one a year and if they only saw behind the scenes, I think they’d see why,” said Ward.

“We’re a small team and we really stand by the quality of the publication and so with each one we work with, anywhere from 10-15 writers and up to about 25 photographers, it really takes us a full year cycle.”

In Rockies 4.0, one of the writers is Steve Tersmette, who jokingly described himself as an “amateur dirtbag” hailing from Kimberely, B.C.

“My friend and I did a traverse of Purcell Mountain and being an ambassador for Crowfoot media, I thought it’d be an opportunity to share a story with a group of people that I have a lot of respect for,” he said.

Tersmette’s story is one of many relevant to mountain living inside the Canadian Annual Rockies magazine and, as Ward says, they do their best to provide great content.

Tersmette’s will be one of them and for him; it’s an honour to be a part of a magazine that aims for professionalism.

“There’s so many great local stories, they have a lot of relativity to us in the south-east corner of B.C. and in kind of the western provinces, the parks and the mountains,” he said.

“The stories and photos that they publish are very relevant to the mountain culture and mountain life for us in this part of the country and they do a really, really professional job of presenting it all.”

In any of the past magazines, it’s easy to see just how much hard work and dedication go into each page. The magazine has been recognized for it’s high-quality work, taking home three awards from the Alberta Magazine Awards this year.

“We won a gold in People and Portraiture, in photography, for John Price’s photo of Will Gadd in a Temple of Silence,” she said.

“We took a gold and a silver in the Landscape, Still Life and Architecture category. Paul Zizka won gold for his photo, Nighttime Ascent on the Grand Sentinel, and Matthew Snell won silver in that category for his shot of Summit Aurora on the east-side of Rundle.”

Ward said she accepted the award on behalf of Snell, who tragically passed away just over a year ago.

“[It was] a climbing accident on Tunnel Mountain. He was very young and had very promising talent,” said Ward.

Canadian Rockies Annual launch will be on May 2 at Wild Bills in Banff. Tickets to attend the event are $20 and include a copy of the magazine. For more information, visit www.crowfootmedia.com/events/.