“Most of what I do is experimentation. The goal is to make something beautiful or creates a feeling within another person. There is never a clear path as to how I get there.”
Oct 15, 2020 2:00 PM By: Evan Buhler 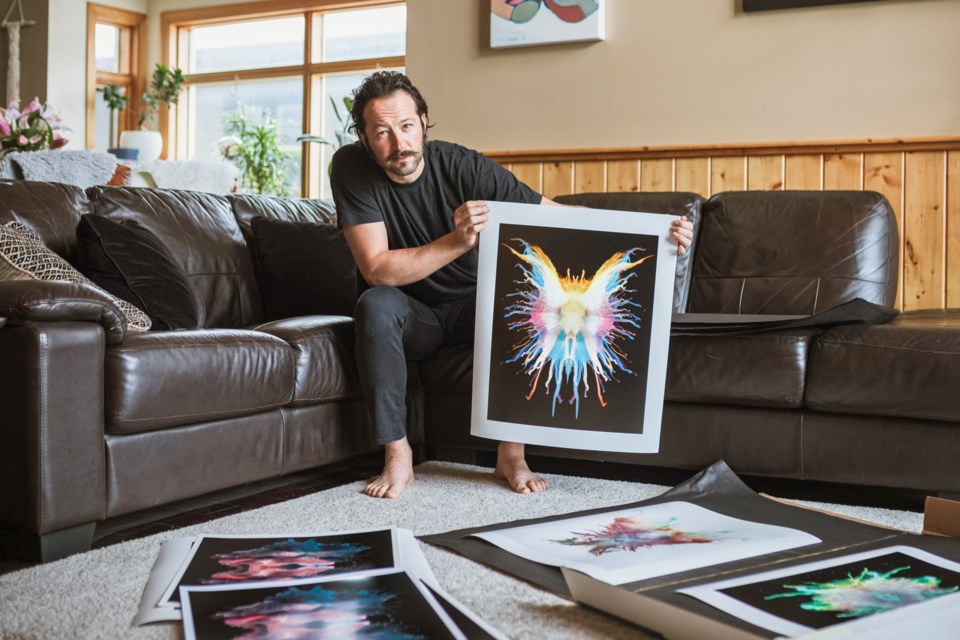 Canmore artist Michael Wachter's debut exhibit Omniarc Ink is open to each individual's own interpretation of the “psychedelic inkblots.” The exhibit of his work at Studio Saljo will open on Saturday (Oct. 17). SILCKERODT PHOTOGRAPHY

CANMORE – Are they cryptic messages, distant galaxies, or alien creatures?

They are all of the above and none. Canmore artist Michael Wachter's debut exhibit Omniarc Ink is open to each individual's own interpretation of the “psychedelic inkblots.”

“It’s interactive," said Wachter. "People get to see what they want in each piece. There are no wrong answers. What you see is what you see – it’s a bit like a Rorschach test on purpose.

“I don’t want my artwork to have to mean anything. Whatever someone sees tells more about them than it does about the image.”

Wachter is a jack-of-all-trades when it comes to the creative arts. He has worked in photography, painting, woodworking, and metalwork. His most recent work, which makes up the Omniarc Ink exhibit, features alcohol ink-based paintings.

He starts each project with a single word pulled from a jar, and builds a theme around that word. For example, if he selected a word related to nature, he might go for a hike and find inspiration from a bird’s feather.

Using what he finds as inspiration, he applies the ink through a screen, randomizing the way the ink is applied to the canvass. Once the ink is applied, rather than waiting for it to dry, Wachter then uses fire or direct heat to evaporate off the alcohol. From there, he takes a picture, then mirrors the image in photoshop creating the final piece of artwork.

“Most of what I do is experimentation. The goal is to make something beautiful or creates a feeling within another person. There is never a clear path as to how I get there.”

“I needed to get rid of this printer, but I still wanted to do something creative with it. Just throwing something away is a waste.”

Wachter said over time he learned how to work with the ink. He learned how it moved, how it heated up and dried to create different patterns and how to use leaves to create impressions. After becoming so involved in the project, he said he finally hit a wall after a few months.

“I get these spells of inspiration and motivation, and just go, go, go. And then I sort of burn out at the end,” said Wachter.

About eight months later, Wachter picked up where he left off and started working on the project again, and will now exhibit his work at Studio Saljo beginning Saturday (Oct. 17).

The art studio is Canmore’s newest. It has had a rollercoaster ride of a first-year, opening on Jan. 25, then shutting down due to the pandemic and reopening in late May. Co-founder Trevor Jones is thrilled to exhibit Wachter’s work.

“He’s a super rad dude and his work is super unique,” said Jones. “It was a no brainer to have a show for Michael at our gallery.”

The primary focus of the gallery is to showcase up-and-coming local and Canadian artists who may not have had a chance at hosting a solo show yet.

“I want to help artists. When I was in school, I did the hustle of trying to get into galleries and I know the struggle of it,” Jones said. “To have someone show interest in your work and want to host a solo show is a huge step for any emerging artist.”

Wachter’s exhibit will be the second show at Studio Saljo since reopening. Jones said the goal of the space is to have a show every six to eight weeks.

As a jewelry designer himself, Jones’ work and an assortment of handmade jewelry crafted by an array of Canadian designers will also be on display at the gallery.

The opening reception on Saturday starts at 6 p.m. and guests are asked to RSVP at Trevorjones@saljo.ca.