CANMORE – Canmore isn’t just a special place, it is full of special people and when the person serving you lunch is also a recent Juno-nominated musician – it is a reality that can border on the absurd.
Feb 14, 2019 12:00 AM By: Tanya Foubert 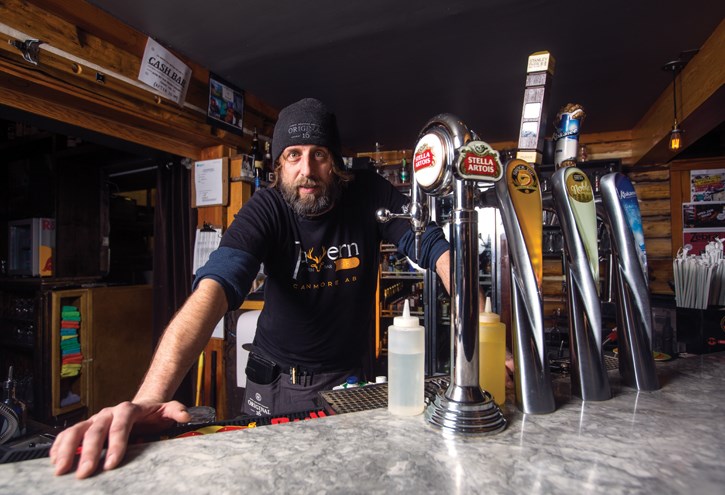 Juno nominated artist Geoff Hilhorst poses at Tavern 1883 in Canmore on Tuesday (Feb. 12). Hilhorst who was nominated as part of the band The Deep Dark Woods, is one of Canmore’s supremely-talented and accessible artists.

CANMORE – Canmore isn’t just a special place, it is full of special people and when the person serving you lunch is also a recent Juno-nominated musician – it is a reality that can border on the absurd.

But it is a fact of life for Geoff Hilhorst, who has become a recognizable face in the local music community because of his talents and as a producer, but also from working in the hospitality industry for several years.

Hilhorst joined the band The Deep Dark Woods in 2009, playing keyboards for the Canadian band along with singer and guitarist Ryan Boldt and current guitarist Evan Cheadle.

In January, the band was nominated for its third Juno award in the category of contemporary roots album of the year for its 2017 release Yarrow. The Deep Dark Woods is up against Ahi, Donovan Woods, Kaia Kater and Megan Nash in the same category.

It is the third nomination for the band, which got the Juno nod in 2012 and 2015 for the albums The Place I Left Behind and Jubilee. Hilhorst said this time around maybe the third time is a charm for the band when it comes to taking home the award.

“I wasn’t expecting it, but you never really are,” he said about the nomination while taking a break serving lunch at Tavern 1883. “There was no expectation, but it was really great to be recognized by the Canadian music industry again.”

The Juno awards take place March 16-17 in London, Ont., where Boldt currently lives full time. There is also a possibility the band might perform as part of the weeklong event leading up the awards ceremony.

Hilhorst said Yarrow was originally intended to be a solo release by Boldt, but it ended up reigniting The Deep Dark Woods as a band.

“We took time off,” he said. “But we decided to release that as a Deep Dark Woods record and we have been playing together ever since.”

The Deep Dark Woods has a distinct style thanks to the voice and song-writing of Boldt. The band’s sound has steadily progressed over the five albums it has released, including its first in 2007’s Hang Me Oh Hang Me.

While fellow bandmates have transitioned, Hilhorst and Boldt have formed the core of the group over the past decade. Hilhorst has also been working as a music producer out of his home studio with talented local musicians like Layten Kramer and Del Barber.

A musician at heart, he said even if the Juno doesn’t go to The Deep Dark Woods, they will continue to play music because that is just what they do.

Go to thedeepdarkwoods.com for more on the band.