“I am a full-time musician I have no other income,” said Alanna J. Brown. “It’s taken me a few years to get to this point, but unfortunately due to this virus, and understandably … all of my performances have been postponed or cancelled.”
Mar 18, 2020 3:00 PM By: Chelsea Kemp 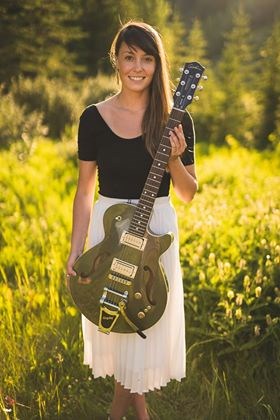 Bow Valley musician Alanna J. Brown is facing an uncertain future promoting her new album and making a living performing as a result of the COVID-19 coronavirus pandemic. SUBMITTED PHOTO

BANFF – Local musician Alanna J. Brown is set to release her first album in almost 10 years, but faces an uncertain future in promoting her tunes in the Bow Valley due to the COVID-19 pandemic.

It has been nearly a decade since she was in the studio, she said, and it was exciting to be back creating new music to share with fans.

However, Brown said it is a turbulent time to be a musician as she is unable to perform due to the COVID-19 pandemic.

“I am a full-time musician – I have no other income,” Brown said.

“It’s taken me a few years to get to this point, but unfortunately due to this virus, and understandably … all of my performances have been postponed or cancelled.”

Brown said it has created a difficult financial situation because as an independent self-employed freelance artist, she does not qualify for Employment Insurance.

The musician said she wants to inspire people to look after each other in these difficult times where people are losing jobs and opportunities. But she added that people should be sensitive to circumstances musicians, small businesses and other self-employed people face because they are not getting compensated for time spent at home.

Brown hails from Toronto originally and moved to the Bow Valley five years ago because she could not resist the draw of the mountains.

“Once I came out here, I realized how much I love it,” Brown said.

She writes a lot of music that is inspired by nature she said, explaining that the mountain views in the Bow Valley help her create jazz inspired folk.

She has been working on her new album for two and a half years using a mix of home studio production and help from her engineer Ed Renzi of the Banff Centre. Her last full-length album was released in 2012.

Brown said she has been putting the finishing touches on her album and is aiming to release her new tunes in May.

“It’s all music that I wrote … and it’s all different instruments that I know how to play,” Brown said.

The original plan was to craft a raw album using only Brown’s vocal and guitar. However, she decided to build and create an immersive album that featured layered tracks of her playing different instruments.

“We built up some really, really, cool songs,” Brown said.

While she is excited to share her new songs with the community, Brown said she is unsure when she will have her next live gig because tourism in the Bow Valley has come to a standstill.

“A lot of people are going to be out of jobs,” Brown said. “Especially musicians, where we’re being hired by these companies to promote tourism.”

Other musicians in the Bow Valley are facing a similar situation scrambling to figure out finances and long-term plans, she said, explaining that right now the best thing to do is follow the safety guidelines put in place by Health Canada and hope that things soon return to normal.

There are many great ways to support local musicians during this difficult time she said. Brown added one of the best ways is by purchasing or streaming music they have recorded to help them generate revenue while the community weathers the pandemic.

“[People can also help] by sharing our videos to potential clients that could be booking us in the future,” she said.

Brown said she is grateful because a couple of clients have reached out to book her for future gigs and provided down payments.

“That’s really generous to help out at a time when they know I’m not really receiving an income from anyone," she said.

It is important to support each other online and work to maintain a sense of community, she said, explaining that musicians are adapting to the COVID-19 virus by offering online classes, jam nights and concerts people can participate in from their homes.

“My personal hope is that come summer, we’ll be back into the summer. I know that in the summer that’s where all the musicians probably make the most money over the course of the year.”

Local music scene staple Garry Gonis of the Ramblin Hey, Ho, Ha’s said that with the Bow Valley on lockdown, musicians in the community are losing gigs.

“That’s a part of our income,” Gonis said.

“But, most of all it's about safety. I’m sure any of us would feel bad if we had a big gig where everyone came and someone got sick.”

Gonis’ band has had three venues cancel gigs due to COVID-19.

The Ramblin Hey, Ho, Ha’s will be hosting a live Instagram concert to help bring music to people’s lives.

“We’re going to try and do it from each of our homes and play a few songs for everyone,” Gonis said.

“It’s a great time to write new music and songs,” Gonis exclaimed. “You’re at home in solitude, you got less interruptions, so if you can say anything about this the best thing to happen is we can write new songs.”

This article has been updated to reflect that Brown has been working on her new album with engineer Ed Renzi of the Banff Centre.