Jean-Francois Dupras is attempting to climb the seven tallest summits on each continent in a bid to raise money and awareness about mental health.
Aug 21, 2019 11:30 AM By: Paul Clarke 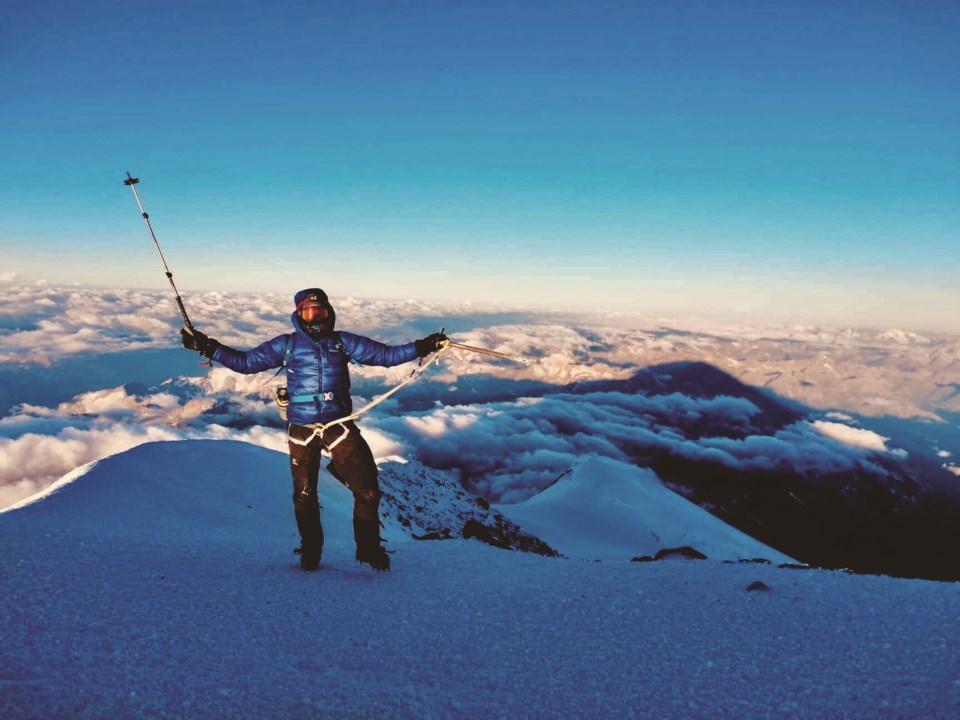 CANMORE – Just over a year ago, Jean-Francois Dupras set out to climb the highest peak on each continent in a bid to raise money and awareness about mental health.

Fast forward a year later and he has already reached the top of three of those seven summits, including his most recent feat reaching the top of Mount Elbrus, the tallest peak in Europe.

Located in the Caucasus Mountains in southern Russia, Dupras had to overcome bitterly cold temperatures and strong winds to get to the top of the mountain, which stands 5,642 metres above sea level.

“It was so busy,” said Dupras, explaining the mountain is a popular tourist attraction in the region.

To reach the top, he took a chairlift to 3,800 metres where he stayed in a hut for two days to acclimatize before pushing to the summit.

On the first day he hiked to 4,500 metres before turning around and hiking back to the hut, followed by a hike to 5,000 metres the following day.

“Even on those days when you were walking, there were people from the village that took the chairlift and then jumped on a snowmobile with shorts and t-shirts up to 4,800 metres,” said Dupras. “It was crazy.”

He said most people who are trying to reach the summit take a snow cat up to 5,100 metres before hiking the final 500 metres to the summit – an option Dupras quickly turned down.

“For me taking a chairlift to 3,800 metres was already kind of cheating,” said Dupras, who reached the summit with a guide from Nepal.

Despite the popularity of the mountain, he said the freezing temperatures and strong winds didn’t make it any easier.

“It started nice the first day as we went up, but around 4,500 metres the temperature quickly changed,” said Dupras, showing a spot on his face where he got frostbite.

He said every afternoon a storm would roll in with winds reaching 60 km/h and temperatures plunging to -30 Celsius.

“During the final ascent it was really cold. I have lots of gear, but even with bigger mitts and a bigger jacket, my hands were so cold,” said Dupras.

“On the third day the weather started to get really crappy. I had a bit of a headache because of the change in altitude, but suddenly I just felt fine because as exhausted as I was and how difficult it was physically and mentally, I was so alive.”

The following day he reached the summit, and as luck would have it, Mother Nature provided a beautiful blue bird day to finish the ascent.

“It was clear, but super, super cold,” said Dupras.

“It was the smallest, but the coldest mountain so far,” said Dupras.

For the 40-year-old father of two, reaching the top of Mount Elbrus was a powerful reminder about how far he has come from battling depression.

“I always need a goal in life, but this is kind of the ultimate goal and I feel like I have a purpose now,” said Dupras. “We all have a story, we all go through ups and downs, but now I can use this to help other people.”

To date he has raised $17,640 for the Canadian Mental Health Association in Calgary, which is close to the total elevation of all three mountains he’s climbed so far.

“My ultimate goal is to raise $43,319, which is the total elevation of the seven summits,” said Dupras.

He said he plans to attempt Mount Aconcagua in Argentina early next year before setting his sights on Carstensz Pyramid in Indonesia, Mt. Vinson Massif in Antarctica and Mount Everest in Nepal.

“My mission is to raise mental health awareness and just to help people understand that no matter your past experiences, your life challenges, your fears, every one of your dreams is possible.”

Dupras will be speaking at the Canmore Public Library about overcoming mental illness on Sept. 9 at 7 p.m. as part of the library’s speaker series. Admission is by donation.

For more information about his quest visit www.jean-francoisdupras.com.