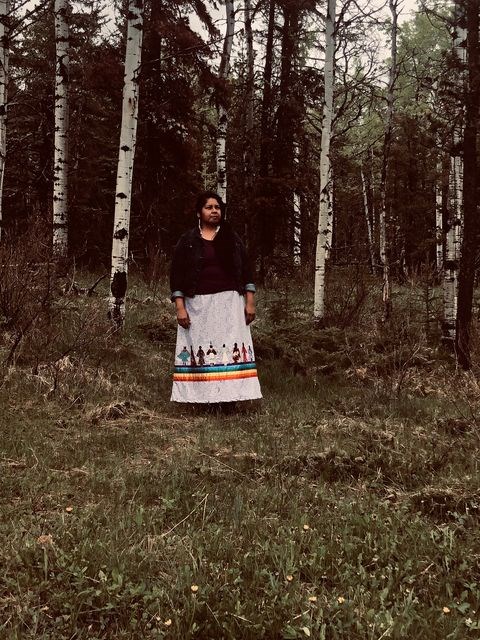 Stoney Nakoda artist, Teresa Snow, wears a ribbon skirt she created. It features a lady in a red dress, which helps remember, honour and bring awareness to Missing and Murdered Indigenous Women and Girls. SUBMITTED PHOTO

CANMORE – With the success of two Cultural Learning Circles, artsPlace is committing to making the arts and culture workshops a regular event next year.

On the first Wednesday of each month in 2021, excluding January, Canmore's arts and culture hub will put a spotlight on different communities within the Bow Valley such as Stoney Nakoda and Azerbaijani, to bridge a better understanding between cultures, their diverse art forms, and inclusion.

"Some workshops will be more about diversity, equity and inclusion (DEI) training for our community," said program manager Nicole Fougère. "We've done DEI for our staff and board because we recognize that change starts from the inside out and we want to learn ourselves as well as share it with the community."

Fougère said it was a very personal and truthful conversation between artists sharing their art, stories, singing, and sacred teachings, among others.

Among which was Teresa Snow, who's main artistic form of traditional and contemporary beadwork and sewing designs were featured at the 2006 Smithsonian Folklife Festival in Washington, D.C.

She gave a gendered perspective of her artwork at the Cultural Learning Circle – a colourful ribbon skirt she crafted with many Indigenous women featured on it, including a woman wearing a red dress.

A red dress helps remember, honour and bring awareness to Missing and Murdered Indigenous Women and Girls (MMIWG), which Snow has a deep personal connection with.

"I always include a lady in red on there because since 2015, my best friend of 28 years has been missing," said Snow. "It helped me to navigate through life rather than become depressed and fall into addictions and things that aren't healthy.

"We have a lot of people in our community who do a lot of art and it's broad range," said Rider.

"As a Stoney people, we're pretty quiet about what we do, so I'm hoping this is an opportunity to bring more attention to Stoney culture and Stoney art."

The upcoming workshops are free and artsPlace is partnering with Harmony@Work, a non-profit organization that offers consulting services for diversity and inclusion goals, for a few events including the first one of 2021 on Feb. 4.