Sasquatch or bigfoot has long history of encounters in Banff, Canmore and Kananaskis

Have you ever seen a sasquatch? Every year, alleged sightings are reported of the legendary cryptid in the Bow Valley and Kananaskis Country.
Oct 31, 2020 8:00 AM By: Jordan Small 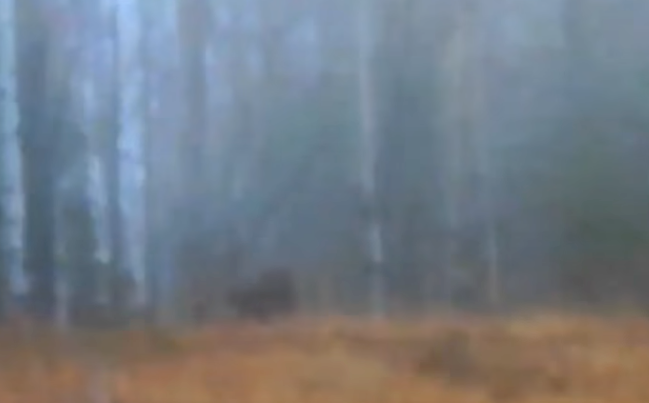 Screenshot of an alleged sasquatch throwing a tree in northern Alberta. A video of the encounter can be found at the ThinkerThunker YouTube channel.

BOW VALLEY – It’s big. It’s hairy. And alleged sightings of the legendary giant-ape-like-creature sasquatch or bigfoot have happened in the Bow Valley for at least 125 years with more being reported all the time.

In Alberta, the sasquatch is known to be a benevolent being and seems to have a policy of mutual avoidance with humans. However, each year, hikers, motorists and people taking their dog into the backyard have come across something that resembles these hulking mysterious creatures.

“Whatever it is people are running in to, whether it’s bears or an alleged sasquatch or some other spooky thing, there seems to be a lot of them and they seem to be everywhere from Waterton to Canmore to Fort McMurray and everywhere in between,” said Keenan from the Alberta Sasquatch Organization (ASO).

ASO is a small group of knowledgeable enthusiasts, folklorists and biographers of the phenomena in Alberta, which researches, documents and collects stories of sightings and responds to where alleged encounters have happened for the past 15 years.

On average, ASO receives about seven to 10 reported sasquatch sightings in Alberta per year, which are a mix between current and historical encounters with the legendary cryptid.

A cryptid is an animal that is thought to exist, but hasn’t been proven to be, such as aquatic beast the Loch Ness Monster and goat-devouring El Chupacabra.

Spring and fall are typically when reports of the enigmatic Alberta sasquatch begin rolling in. Keenan doesn’t think it’s a coincidence the alleged creature is more active during shoulder seasons when fewer people are around.

“There is something about these shoulder seasons in between that seems to bring them into these areas that humans normally occupy,” said Keenan.

The common description of a sasquatch or bigfoot is of a bipedal ape-like creature, covered in dark shaggy brown fur and standing over seven-feet tall. It has long muscular arms, a broad face and large feet. Hence, the catchy bigfoot name. Sasquatches have been associated with gigantopithecus, a giant extinct ape that roamed Asia millions of years ago.

Sasquatches are also thought to possess super strength and use a sharp wit to elude mankind in the North American wilderness.

Keenan said that whatever is happening in Alberta has some credibility, adding the alleged sasquatch encounters can happen anywhere where there’s continuous trees, sprawling forests, and a source of food and fresh water.

“A lot of people have an idea of where they could exist or should exist, but the reality is that they’re in our backyards,” said Keenan.

Speaking of our backyards: two recent cases of alleged sightings in Canmore occurred in the same area, but years apart.

In both incidences, a creature was spotted on the eastern edge of town around the Bow River Campground near the Trans-Canada Highway. The motorists exited their vehicles to snap a photo of the iconic Three Sisters mountain peaks and saw a sasquatch by the river.

In the north east of Kananaskis Country where mountains meet flats, the area is considered to be a hot spot for bigfoot sightings. Just north of there is the Stoney Nakoda Nation, another active spot for local sightings.

In an ASO interview, all but one in a family of five on the First Nation have allegedly had encounters with a sasquatch over the course of their lifetime. The only member who hadn’t was a child under the age of six.

“To them, it was a matter of fact,” said Keenan.

In another case in the 1970s, a Stoney woman said she and her siblings saw the ape-like creature climbing a hill when they were coming home from school.

In many Indigenous cultures, sasquatches are real beings and possess supernatural abilities.

Banff National Park has, perhaps, one of the most infamous cases in Canada of an alleged sasquatch that made its residence around a glacial lake in the late-1800s.

The Lake Minnewanka Wildman is often associated with early European settlers violently encountering a sasquatch at the 21-kilometre-long lake near the Banff townsite that’s surrounded by mountain peaks, stony shorelines and thick bush.

Initial reports of the Lake Minnewanka Wildman date back to 1895 when massive 19-inch footprints were discovered near the southern shore. In the following years, the alleged creature, which was described as a bipedal animal taller than seven feet and could have resembled a “great bear” from afar, was spotted in the vicinity of the lake and was often met by rifle fire by frightened and trigger-happy settlers. The under-attack creature howled deafening and horrible shrieks and was thought to have been shot multiple times from 1898-99.

Its last reported sighting was in early winter 1899 when a man on horseback saw a creature with a bad limp.

That is until 2016, when an alleged sighting of the bullet-magnet Bigfoot – or its kin – resurfaced at the popular lake destination when a group was boating near the shoreline.

“Regarding the Minnewanka sighting, everyone simply played it off like it must have been a hiker dressed up but there is almost zero access where they saw it,” reported the individual to ASO's Sighting Reports. “It was walking near the shore and then went back into the trees.

"My thought would be that it uses the shoreline to make up time as the forest on that side of the lake is so thick and almost unwalkable. This is a direct path towards the Johnson Lake area and really got me wondering.”

Keenan added that some reports that come in are incomplete or "wishful thinking" and a lot of information doesn't make it on the website.

Most Albertans coming forward with bigfoot sightings tend to have a strong incentive to remain anonymous.

"This whole topic, as social taboo as it is, most people wouldn’t come forward to their family or their friends about their experiences. I think we see that here [in Alberta]," Keenan said. "The longer we’re around, the better experiences the people will have with revealing this info with us. Year-after-year, we get better outcomes with people who are interested in talking about it."

Although ASO documents material from first-hand sightings, the group also conducts field research. This past May, the team set up a recording device in a remote area near Jasper National park that's designed to collect samples of songbirds. For months, the recorder captured animal sounds from 10 p.m. to 6 a.m.

Keenan is still sifting through the audio.

"Whatever is going on here in Alberta, it has credibility, at least as an interesting thing that is happening," he said.