Fernie B.C.'s alt-folk rock favourites Shred Kelly are embarking on a cross-Canada tour in support live music venues and its new album Like a Rising Sun – without ever leaving their homes
Oct 15, 2020 12:00 PM By: Tanya Foubert 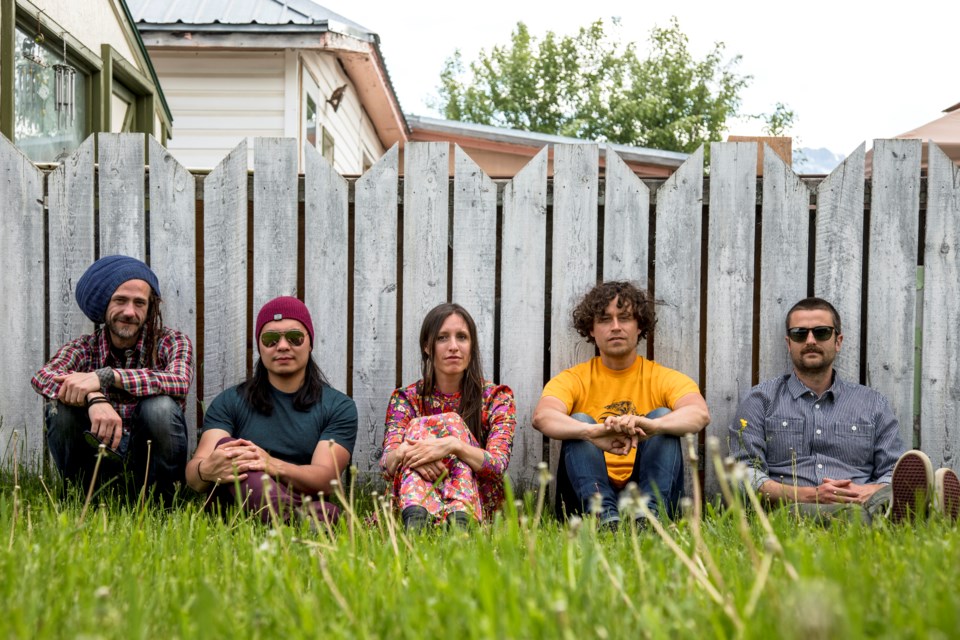 FERNIE, B.C. – Bow Valley perennial favourites, alt-folk rockers Shred Kelly, are about to embark on a cross-Canada tour from the comfort of their homes in Fernie, B.C.

Like a Rising Sun, released in June, will be the focus of each live performance, according to bandmember Sage McBride, who took time to speak with the Outlook at the beginning of October.

"We are going on a cross-country Facebook page tour to some of our favourite venues and towns to play in, as if we are on an album release tour without actually leaving," McBride said. "We are setting up a stage in our rehearsal space and we will be filming it there every night and streaming directly to the Rose & Crown's Facebook page."

The 10-day virtual tour is also in support of live venues across Canada, which have been significantly affected by COVID-19 restrictions on events and performances. Recently, a cross-Canada initiative saw venues display a red light to showcase how many are still shuttered eight months into the pandemic.

McBride said while the livestreams are available on social media, tickets to the shows are also for sale with proceeds to be split with the venues to "help support them in this difficult time for the live music scene."

"It was a way for us to get out and tour, or replicate our old lives, and raise a bit of money for venues and promote the album in a really strange way, all at the same time," she said. "It is not the same as going to the bar and having drinks, but we are hoping that ... people will make a night of it and support local businesses.

"We are king of excited just to play shows for 10 nights in a row because we have not done that in months."

McBride said each concert will begin with a tune-up session and a bit of light-hearted fun between band members. They have also designed postcards for each stop on the tour in support of the venues.

"Every night, we will do things differently," she said.

The fifth studio album for the band was released earlier this summer, however, McBride said they were unsure if it was the right thing to do, given the state of the music industry.

Like a Rising Sun, was ready this spring and the band felt it was better to move forward creatively with new music by releasing it this year, even though things are a bit different these days.

"There is a lot of speculation in the music industry about the best way to release music right now – nobody really knows," she said. "This way, we get to do our release, still in a pretty interesting way, but maybe not the way we are used to.

"It felt good to see the process through, instead of just hanging onto [these songs] and waiting."

The music on the album reflects pivotal life changes for McBride and Newton, including the loss of his father and the birth of their daughter Murphy last year. McBride said those major life-altering events provided fertile ground for their song-writing process, which was very much supported by time the pair spent last winter at the Banff Centre for Arts and Creativity.

A week-long intensive in the Painter House, built in 1913 by Walter Painter and moved to Banff Centre grounds a decade ago, helped to create the conditions for McBride and Newton to channel what was happening in their lives into new music. It was a therapeutic grieving process and one that resulted in a lot of songwriting by both.

"They are our favourite songs we have written, because for us they are so personal and mean so much," McBride said. "They came out so effortlessly, because they mean so much to him."

The band then travelled to Vancouver to record the album with producer Nygel Asselin with NYG Productions, who also had a new baby. Bassist Vlasschaert had a baby at the time as well, which meant Like a Rising Son was recorded with three babies in tow.

"Nygel was a dream to work with on the project, it was great to work with somebody who understands what we were going through," she said, with a laugh.

The single "Looking For" was written before the songwriting retreat in Banff, but tells a classic tale in any mountain town when a young couple meets for the first time.

"I wrote it as a reflection of the time Tim and I first met, looking back 10 years," McBride said.

The video follows a mountain girl and guy through their daily routine until they finally meet. Friends in Fernie played the parts and a neighbour produced the video, while everyone maintained COVID-19 safety protocols.

"It was definitely a different kind of process to the other videos that we have ever done before," she said. "They all did such a wonderful job, I am really happy with the video."

In combination with the release of the single, McBride said the band is doing a giveaway from its website to win a six-day ski trip to Fernie, Golden and Revelstoke. The hook – participants must enter their best mountain town love story.

Go to Shred Kelly's website to find out more about the contest, new album, postcards and the virtual Canadian tour in support of local music venues.