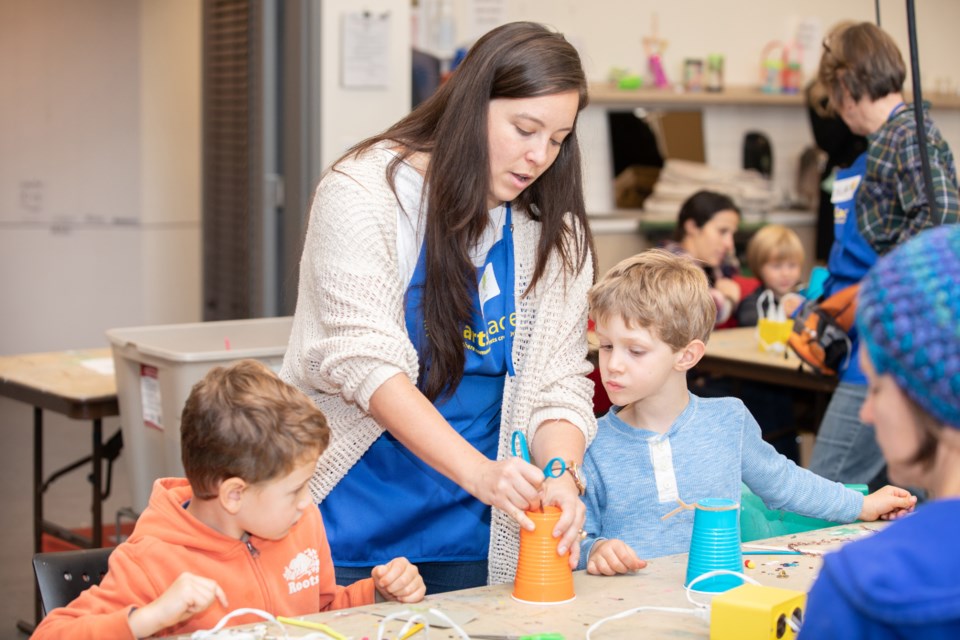 CANMORE  – Building on its commitment to celebrating arts and creativity in the Bow Valley, artsPlace rung in the new year with the expansion of its programming to Banff.

Every five years, the Town of Banff conducts a community social assessment, according to community development coordinator Ruth Pryor.

“It gives us a snapshot of how the community is doing and it helps us determine where to best direct our support and close existing gaps,” Pryor said. “They let us know what was working well for Banff and what could be improved.”

Last year's assessment and saw more then 800 residents participate in the conversation. A common theme shared by locals was a desire to see more indoor activities, especially programming like what was available at artsPlace.

“It was the only organization mentioned that isn’t currently in Banff,” Pryor said, explaining that the community programming fostered by artsPlace was a key part of the conversation.

Pryor said she appreciates the experience artsPlace is able to bring to the partnership and that the municipality was fortunate to have the funding and space that allowed for a pilot project to take root. ArtsPlace is organizing the instructors for programming.

There are some creative opportunities in the community through organizations like the Banff Centre and the Whyte Museum, she said, but partnering with artsPlace served as an opportunity to provide more consistent programs for residents.

“It fit both of our organization's mandates to pilot something,” Pryor said. “People have asked for it and now we can see if they are going to come to it.”

She said she is looking forward to hearing people’s responses to the courses to find out where the programming will fit into the mosaic of Banff culture.

Pryor added that she is excited that they can offer Banff Access discounts that will be available for those who qualify.

“The main message from us is – please come out and take part,” Pryor said. “I’m really excited about it.”

Upon its completion, the pilot will be evaluated and the municipality will move forward based on engagement and feedback from the community.

The team-up is helping to grow art programming in the Bow Valley, artsPlace program manager Nicole Fougère said, because of the activities they can now offer in Banff as part of the pilot.

“This community is abundant with extraordinary, intelligent, creative, engaged and caring people,” Fougère said. “That’s a good thing – It shows the commitment of this community towards arts and culture.”

A driving force for artsPlace has been the mandate to grow the arts in the Bow Valley because the activity serves a way to enrich the lives of residents in the area.

“The vision of artsPlace is a Bow Valley in which all residents participate in the arts and appreciate creativity as a vital part of their daily lives,” Fougère said.

The expansion into Banff helps ensure that mission is being met, Fougère said, while honouring the important place the Town of Canmore has had in ensuring artsPlace can thrive.

ArtsPlace remains committed to serving the town of Canmore, Fougère said, while ensuring they have activities across the Bow Valley from Stoney Nakoda to Banff.

“Part of the magic of the Bow Valley is that people really care about the place that they live, so it’s good to honour people in the place that they live by extending our programming from Canmore to the whole Bow Valley,” Fougère said. “We are based in Canmore and we are deeply committed to this [artsPlace] building and the Canmore community. The continued health and vibrancy of our programs right here in the artsPlace venue in Canmore is a top priority, but because those are so healthy we have the reach like a garden in full bloom.”

ArtsPlace instructor Sam Welsh said she is looking forward to helping bring arts programming to the Banff community. She is one of several instructors who will play a role in helping expand artsPlace classes into Banff.

“It’s really exciting because we have known for a longtime that this something people in the Town of Banff have been asking for,” Welsh said. “It’s so nice to be able to actually deliver on that.”

The arts are an integral part of the community and play a role in fostering well-being in community members she said, explaining that having an artistic outlet helps create a healthy and well-balanced quality of life.

“Arts can be a huge way to de-stress and decompress, but they’re also an alternative way of learning, gaining new skills, gaining new ways of seeing the world and expressing yourself creatively,” Welsh said. “It’s essential for everybody.”

Welsh will be teaching Mixed Media Art Club in the Banff Canmore Community Foundation basement and hosting a Sunday morning class for families for children between the ages of two and eight.

“I hope families join us – it’s a great way to spend a Sunday afternoon,” Welsh said. “Even if you don’t consider yourself an artist or you don’t feel like you’re a creative person this is definitely a great chance to explore some of this new artistic programming that’s being offered.”

There will be three locations for programming – in the space above the Banff Public Library, the Banff Elementary School and the Banff Canmore Community Foundation basement.

The collaborations between the Town of Banff and artsPlace will include some free family programming and paid programming that includes Sunday drop-in art workshops and a mixed-media arts club.

For more information on the Banff and artsPlace programming visit artsplacecanmore.com/programs/banff-programs. Town of Banff piloting a selection of indoor activities for the winter, more information can be found at banff.ca/indooractivities.