A sad anniversary and the COVID-19 fiscal snapshot; In The News for July 6 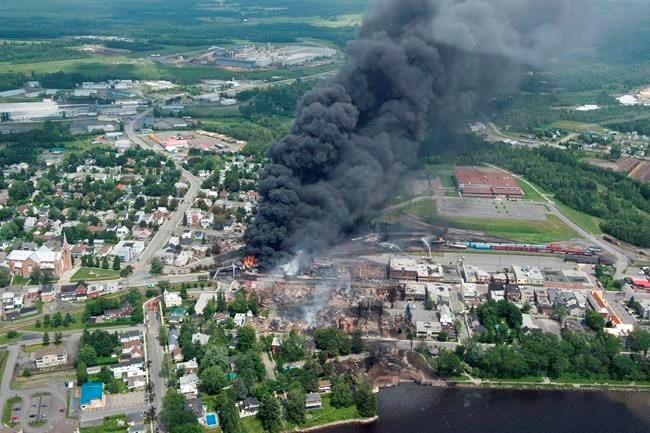 In The News is a roundup of stories from The Canadian Press designed to kickstart your day. Here is what's on the radar of our editors for the morning of July 6.

What we are watching in Canada ...

LAC-MEGANTIC, Que. — Lac-Megantic will mark the seventh anniversary of a tragic rail disaster that claimed 47 lives by inaugurating a long-planned memorial space.

On July 6, 2013, a runaway train hauling tanker cars loaded with volatile crude oil barrelled into the town of 6,000, derailed and exploded, destroying a large part of the Quebec town's downtown area.

The memorial — which has taken three years to construct — will be set up at the site of the former Musi-Cafe in the heart of the city, where staff and patrons made up many of the victims.

The project, designed by architects Pierre Thibault and Jerome Lapierre, was created with the objective of everyone being able to remember, in their own way, the community-changing event, the city said in a statement.

Given the COVID-19 pandemic and physical distancing measures, the inauguration will be broadcast on Facebook, with several guests attending in person and residents invited to visit in the days and weeks to come.

As per tradition, the bells of Ste-Agnes Church will ring at noon in tribute to the victims.

Opposition parties have laid out their demands for the federal Liberal government as Ottawa prepares to update Canadians on the country's finances after four months of COVID-19 — and where it expects the economy to head for the rest of the year.

Wednesday's fiscal snapshot will be the first public assessment of the country's economic and financial situation since the pandemic started in earnest in March, forcing provinces into lockdown and the Liberal government to start doling out billions in aid in lieu of a federal budget.

The snapshot is expected to give an idea of how the government sees the rest of the fiscal year playing out, including figures for a potential deficit.

But the Conservatives and NDP made clear Sunday that they want more than just numbers: they want action. That includes additions, changes and expansions to federal COVID-19 support programs along with more accountability and transparency.

Federal figures last week showed direct government spending on COVID-19 supports at just over $174 billion, which included another increase to the budget for the Canada Emergency Response Benefit. That is now expected to cost $80 billion as eligibility increased to 24 from 16 weeks.

At the same time, Statistics Canada last week reported that the Canadian economy shrank 11.6 per cent in April — the largest monthly drop on record. That follows a 7.5 contraction in gross domestic product in March. Both are expected to hit Ottawa's bottom line through lost tax revenue.

LOS ANGELES — Hamilton-raised theatre star Nick Cordero, who had legions of supporters rallying for him on social media during his harrowing health battle with COVID-19, has died in Los Angeles.

His wife, dancer-turned-celebrity personal trainer Amanda Kloots, said Cordero died on Sunday morning, "surrounded in love by his family." He was 41.

"My heart is broken as I cannot imagine our lives without him," Kloots wrote on Instagram. "Nick was such a bright light. He was everyone's friend, loved to listen, help and especially talk. He was an incredible actor and musician. He loved his family and loved being a father and husband."

The Tony Award-nominated actor, singer and musician first entered hospital in L.A. at the beginning of April. He was in an intensive care unit on various machines to help support his heart, lungs and kidneys. He was in a medically-induced coma but had come out of it before his death.

Cordero grew up in Hamilton's west end and attended Ryerson University for acting.

His performance in "Bullets Over Broadway" earned him the Tony nomination and he was also nominated for a Drama Desk Award for his role in the musical "A Bronx Tale."

The rally at Portsmouth International Airport will come three weeks after an indoor rally in Tulsa, Oklahoma.

That gathering was the president's first of the COVID-19 era, and it drew a smaller-than-expected crowd amid concerns of rising infections in the region.

Trump was narrowly defeated in 2016 in New Hampshire by Democratic nominee Hillary Clinton.

Before the pandemic, campaign officials had pointed to the state as a place where they saw a chance to expand the electoral map during Trump's re-election effort.

What we are watching in the rest of the world ...

PARIS — The Mona Lisa is back in business.

Paris' Louvre Museum, which houses the world's most famous portrait, has reopened after a four-month coronavirus lockdown.

Just 7,000 visitors were expected on the reopening day Monday.

That is a drastic plunge in numbers compared with before the pandemic, when the museum used to attract up to 50,000 visitors a day in the busiest summer months.

Reservations and face masks are now required for visitors.

About 70 per cent of the giant museum, housing 30,000 works, is again accessible to visitors starved of art in lockdown.

This report by The Canadian Press was first published on July 6, 2020.