Davis, Adeleke and Stephen all not feeling sentimental about facing former teams 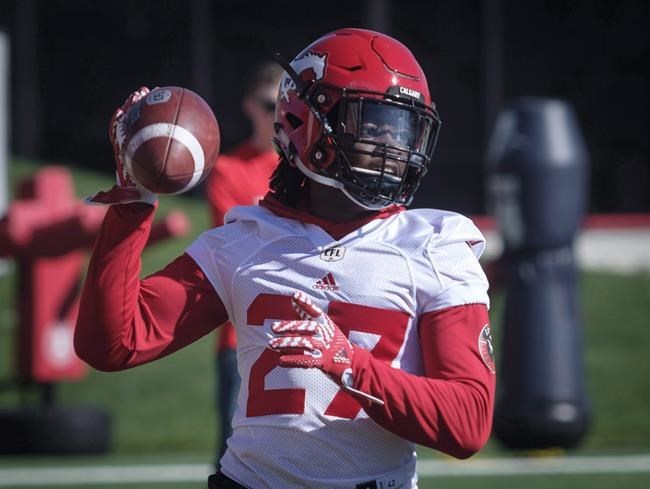 Both will receive the Grey Cup rings they earned last year with the Stampeders on Saturday. But neither will be feeling overly sentimental when they square off against their former team at Tim Hortons Field as the Hamilton Tiger-Cats (3-1) look to snap a 15-game losing streak against Calgary (2-1) and earn their first home victory over the defending CFL champions since 2009.

"It (Grey Cup ring) is a pleasant ending to a great chapter," Davis said Friday. "That (Stampeders) is my family . . . we're all like brothers so it's just like getting back together with family again.

"But I'm looking forward to breaking their streak. I'm not going to lie. When I was in Calgary for some reason we couldn't get a win in Montreal and when we finally did we won the Grey Cup. This is going to be one of the big monumental games to pretty much get over the hump."

Calgary's streak includes beating Hamilton in the '14 Grey Cup game. However, like Davis, Adeleke is treating Saturday's contest like any other.

"I'm a Tiger-Cat and that's all that matters," he said. "Right now this week, that's just another team on the schedule.

"That's not my old team, those aren't my friends. That's a group of guys I'm trying to beat."

Davis and Adeleke aren't the only players facing their former team. Calgary safety Courtney Stephen makes his first return to Hamilton, where he spent his first six CFL seasons.

Stephen, a native of Brampton, Ont., will appear in his 100th career CFL game Saturday night. But like Davis and Adeleke, he's not feeling the least bit nostalgic.

"There's going be no sentimental vibes, no laughing and joking," he said. "This is pro football.

"And at the end of the day, you want to — you're paid to — go out and get your job done. There won't be any smiles or handshakes or any of that stuff until we get that (win)."

Sophomore Nick Arbuckle makes his second straight start for Calgary in place of injured veteran Bo Levi Mitchell, last year's CFL and Grey Cup MVP. Arbuckle was a tidy 19-of-22 passing for 262 yards and two TDs in last week's 37-10 road win in Regina and overall has completed 28-of-31 passes (90.3 per cent) for 355 yards with three touchdowns.

"High completion percentage," Hamilton coach Orlondo Steinauer said of Arbuckle. "It would seem he pays attention in the backup role, he takes it seriously.

"He's a guy who throws a good ball, he seems to be able to make a majority of the throws, he's been comfortable. I think Dave (Calgary head coach Dave Dickenson) has done a good job with him."

Davis said one reason for Arbuckle's success has been his mindset of preparing like he's the starter. And Davis wasn't shy about pointing that out to Mitchell.

"We used to joke all the time, 'You better watch out because Arbuckle is coming,'" Davis said. "Arbuckle is making the most of his opportunity right now and I wouldn't expect him to do anything less coming up (Saturday).

"It will be good seeing him again. I'm going to have to get to him just a few times."

Davis and Co. have made that a habit this season. The Ticats entered this week's action with CFL-best 14 sacks and Davis having registered a team-high three.

But Montreal's William Stanback ran for 203 yards and three TDs in leading the Alouettes past Hamilton 36-29 last week. Predictably, Steinauer expects Calgary to try and establish the run Saturday.

"Stopping is a tall ask, containing them is something else," Steinauer said. "They do present different challenges . . . I think the main thing is understanding what they bring.

"We're prepared for that. Talk is cheap, you have to show it on gameday."

The last CFL player to have five interceptions through the first three games of a season was none other than Steinauer (2007).

"He's playing great football and I guess I've been there before," Steinauer said. "It's fun when it happens like that, they usually come in bunches.

"Let's hope they show down (Saturday)."

MONEY PLAYER: Calgary's Eric Rogers has 16 catches for 169 yards this season but four have been four touchdowns.

MASOLI'S STRUGGLES: Masoli sports a 31-29 career record as a CFL starter. But the East Division's outstanding player last year is 0-4 lifetime versus Calgary.

Canadian Eugenie Bouchard books spot in third round at French Open
Sep 30, 2020 4:06 AM