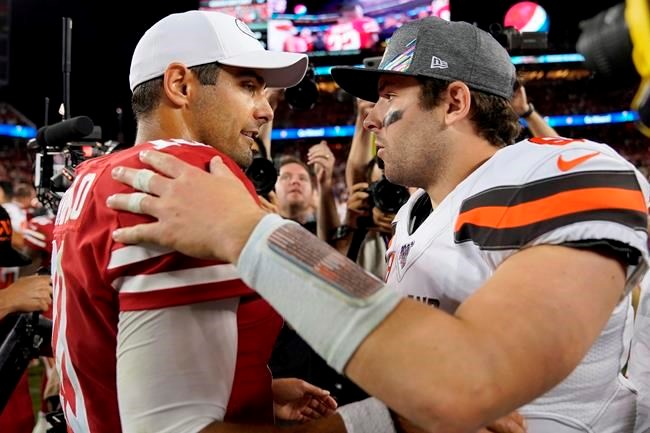 BEREA, Ohio — Baker Mayfield's brash past and celebrity status have made him a wanted man.

Around the NFL, he's Public Enemy No. 6.

Whether due to jealousy or simply wanting to bring him down, Cleveland's quarterback is being targeted by defenders.

This week, Mayfield found himself in the crosshairs of San Francisco's Nick Bosa and Richard Sherman, both of whom took different runs at the charismatic second-year QB with a reputation for speaking his mind and strutting around on the field.

Bosa roughed up Mayfield and mocked him during the 49ers' 31-3 blowout of the Browns on Monday night while Sherman blitzed him afterward, saying the 24-year-old star had disrespected him by not shaking the outspoken cornerback's hand before the pregame coin toss.

On Wednesday, after video surfaced of Mayfield shaking hands with Sherman and all the 49ers, the three-time All-Pro backpedaled.

"It's definitely my bad," Sherman said during an appearance on The Pat McAfee Show. "I never want anybody to have to deal with some stuff that they didn't do. And so, the questions that he's gonna get and the annoying, nonsense questions about some stuff that happened in a game that's already been done, sure he'll get an apology for that.

"I'll probably reach out to him via text or social media to actually get ahold of him and talk to him in person, I mean on the phone. Yeah, he definitely deserves an apology, and that's my bad on that."

Just off the practice field, Mayfield said he had not yet heard from Sherman and that he didn't mean to slight him in any way.

"I respect him and who he is as a player," Mayfield said. "He's a great player and has been for a while, and in no way did I mean anything like that."

Mayfield even found a way to laugh off the incident by joking that he was vindicated.

"I know what I did. That's the one time the camera and something recording me has gone in my ," he cracked, eluding to some well-known on-field actions that have gotten him in trouble.

Sherman tried to pin the blame on media coverage.

"I've said my piece about it. I'm going to have a conversation with him, and then I'm going to be done with it," he said after the 49ers worked out. "It's just funny it got so big. Man, I thought football is what they watch. I guess it's the soap opera."

Mayfield threw two interceptions — one by Sherman in the first quarter — and had the worst game of his young pro career against the 49ers. He didn't throw a touchdown pass for the first time 18 starts, completed 8 of 22 passes, got sacked four times and was constantly running from pressure.

Bosa, it turns out, was looking to settle a college score with Mayfield.

After the former Ohio State star forced Mayfield into a rushed throw late in the second quarter, he celebrated by pretending to wave and plant a flag on the field. Bosa was mimicking Mayfield, who led Oklahoma to a win over the Buckeyes in 2017 and then famously ran to midfield planted a red-and-white OU flag inside the "Block O" logo at Ohio Stadium, angering the school's fans and players.

Bosa didn't forget, and following the game said Mayfield "had it coming."

Mayfield couldn't help but shoot back with a snarky reply when asked if he thought the Niners were out for revenge.

"I do not think Sherman's was a personal vendetta. He said what he said," he said. "Bosa, good for him. He had it premeditated. He has been thinking about that obviously for two years now. That is a long time to think about that loss."

NOTES: Browns starting CBs Denzel Ward and Greedy Williams returned to practice after missing three games with hamstring injuries. They each got hurt during a 10-minute span in practice on Sept. 19, three days before a game with the Rams. Veterans TJ Carrie and Terrance Mitchell have started in place of Ward and Williams. ... WR Odell Beckham Jr. was listed on the injury report with a hip problem. He's only caught four passes for 47 yards in the past two games.