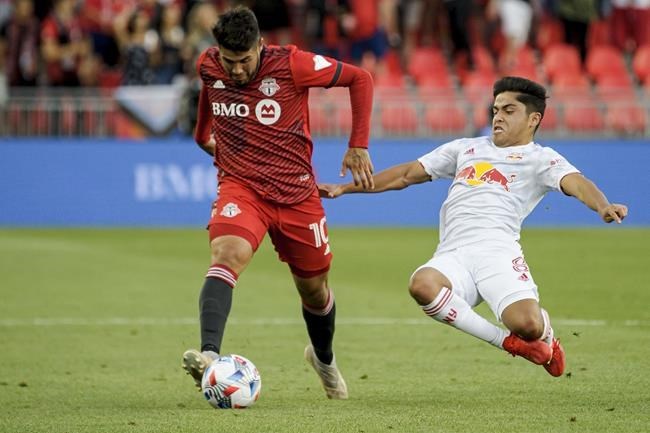 TORONTO — It's slow progress and there's a long way to go but Toronto FC is digging its way out of the deep hole it dug itself this season.

Thanks to a goal by teenage substitute Ralph Priso, TFC rallied to tie the New York Red Bulls 1-1 in MLS play Wednesday.

Toronto (2-8-4) is now unbeaten in three games (1-0-2) under interim coach Javier Perez, who took over from the fired Chris Armas in the wake of a six-match losing streak (and seven-game winless run). In those three matches, Perez has already matched the points total Armas had in his 11 games in charges.

"I think Javi's done a good job of preparing the team for each game and specifically for what each opponent is going to bring to the table," said veteran fullback Justin Morrow.

"A couple more plays on each end and you're going to see some of these ties turn in into wins but all-around it's been on the up and up," he added.

It marked only the second time in nine games (0-7-2) this season that TFC has given up the first goal and earned a point.

There is still work to be done. Toronto came into the game 26th in the 27-team league standings and had the worst defence in MLS, conceding 2.31 goals a game.

It lived up to that billing in the 46th minute when the backline was unable to handle a long free kick from inside the New York half. Goalkeeper Alex Bono made back-to-back saves on Brazilian forward Fabio and Polish striker Patryk Klimala in the ensuing penalty box mayhem but could not stop Klimala's second effort.

Priso pulled Toronto even in the 62nd minute. Red Bulls goalkeeper Carlos Coronel was only able to tip a high Yeferson Soteldo cross away and the ball went straight to Priso whose left-footed shot bounced off the ground and into the goal on Toronto's first shot on target.

"It's the first goal I've scored at any level in a couple of years so it was good," said Priso, a cool customer on and off the pitch.

The goal, in Priso's 11th career MLS game and his first at BMO Field, brought Toronto and the fans at BMO Field to life with Soteldo starting to attack down the left wing.

Priso said his goal celebration was muted partly because it was only 1-1, partly because he doesn't get too excited at the best of times and "a little bit was I didn't really realize I had scored."

Perez said he had expected the choppy first half, pointing to what he called the Red Bulls' "disruptive" style of play.

"The second half we knew the game was going to open up and our players were going to be able to play a little bit more with the ball and display the style of play that we like more," added the Spaniard,

Soteldo, in particular, was a force in the second half as he tormented the Red Bulls defence.

Perez brought star striker Jozy Altidore on in the 54th minute in a bid to spark the offence. Altidore, returning to action after eight weeks on the outs with the club, came on in the 64th minute Saturday and scored in TFC's 1-1 tie with visiting Orlando.

Altidore came close Wednesday in a wild stoppage time but his header off a cross from Soteldo, whose moves left a defender sliding off the pitch, went high.

Attendance was capped at 15,000, up from 7,000 on Saturday — the first time there were fans in the stands since March 2020. Wednesday marked the largest crowd at a Canadian sporting event since the pandemic began.

There was some bad blood midway through the second half when Altidore tangled with defender Thomas Edwards. Alejandro Pozuelo got involved in the subsequent melee with both Edwards and Pozuelo subsequently cautioned.

The Red Bulls outshot Toronto 19-6 (4-1 in shots on target) but it was the visitors reeling as the clock wound down.

The Red Bulls' weekend game against visiting Inter Miami was postponed due to inclement weather. The New Yorkers (5-5-3) were unbeaten in their three previous games (1-0-2) and had lost just once in six games (3-1-2).

But away form has been an issue. The Red Bulls ended a nine-match winless run on the road (0-6-3 including the playoffs) with a 2-1 win at Orlando on July 3.

TFC went with the same starting 11 that tied Orlando City 1-1 Saturday. That meant another start up front for Dom Dwyer with Altidore on the bench.

The Red Bulls went with the same starting 11 planned for the Inter Miami match.

Brazilian fullback Auro made a saving tackle for Toronto in the 12th minute, poking the ball away from Venezuelan midfielder Wikelman Carmona in the penalty box.

Auro was hurt on the play and, after taking another knock, exited in the 18th minute. With fullbacks Kemar Lawrence and Richie Laryea away at the Gold Cup, midfielder Mark Delgado, in his 200th MLS regular-season appearance, had to shift to right back with Priso coming in the midfield.

There was no definitive word on Auro's injury but Perez said "it doesn't look good."

Toronto was missing four other players at the Gold Cup — Jonathan Osorio and Laryea (Canada), Eriq Zavaleta (El Salvador) and Lawrence (Jamaica). Striker Ayo Akinola, who was in attendance Wednesday, is lost for the season after injuring his knee at the CONCACAF championship in Sunday's 1-0 loss to the U.S.

Lawrence came off in the 60th minute of Jamaica's 1-0 loss Tuesday to Costa Rica with a knock. TFC said its understanding was it was just a precautionary move.

There is no word yet on attendance numbers for Toronto's next home game, scheduled for Aug. 1 against Nashville SC. TFC plays at Chicago on July 24.

This report by The Canadian Press was first published July 21, 2021