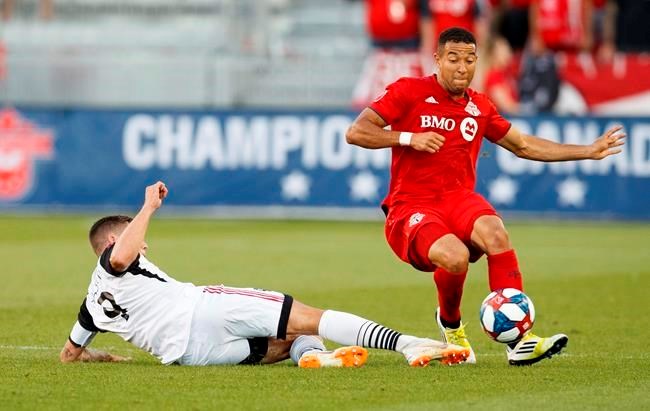 Toronto FC midfielder Nick DeLeon returned from a groin injury Wednesday and made an immediate impact with two goals to help his team beat Ottawa Fury FC 3-0 to advance to the Canadian Championship final.

"He didn't know what a brace was, I had to explain to him," Toronto manager Greg Vanney said of the term that refers to scoring a pair of goals.

Toronto, the three-time defending Canadian champions, will play the Montreal Impact in the two-game Voyageurs Cup final on Sept. 18 and 25. Montreal beat Calgary of the Canadian Premier League 3-1 on aggregate to advance.

DeLeon, in his eighth MLS season, has never scored more than six goals per year. He scored his career-best six in 2012.

His presence had been missed over the last two weeks as he recovered from injury, with Toronto struggling to score in League play.

"The two goals felt good," DeLeon said. "But more importantly, it feels good to advance to the final."

Patrick Mullins also scored for Toronto, which will play for the Voyageurs Cup for the fourth consecutive year.

Toronto advanced after winning both matches against Ottawa 5-0 on aggregate.

"We just want to keep building momentum, it doesn't matter who it is against," Vanney said. "We just wanted to get a bit of our swagger back to know that when we get on the field, we're going to win games."

Toronto opened the scoring in the 14th minute when Richie Laryea passed the ball to Nick DeLeon inside the box. DeLeon shot the ball into the bottom corner of the net for a 1-0 lead.

In the 37th minute, Mullins scored when DeLeon won a one-on-one battle for the ball with Irving. DeLeon passed the ball to Mullins who had an empty net and tapped it in for a 2-0 lead.

DeLeon scored his second of the game when he got around two Ottawa defenders, and his shot from outside the box sailed into the net to make it 3-0 Toronto.

Toronto FC dominated the opening half, firing 10 shots toward Ottawa's goal with five of them on target.

Ottawa had two shots in the opening half and both were on target.

In the 13th minute, Ottawa striker Hadji Barry dribbled the ball inside the box before taking a wide-angle shot that was easily saved by Toronto's Alex Bono.

In the 25th minute, Ottawa's Christiano Francois received a through ball from Carl Haworth and had a clear chance at the net, but his shot went right to the chest of Bono.

"I think we were controlling the game the first 15 minutes until one bad pass came in the middle," Ottawa manager Nikola Popovic said.

DeLeon received a yellow card in the 58th minute for grabbing an Ottawa player on the counter-attack.

Toronto's Noble Okello made his TFC debut when he subbed into the match to begin the second half. The 19-year-old Okello, who has been part of Toronto's academy for the last seven years, had a scoring chance in the 65th minute from just outside the box, but Ottawa defender Thomas Meilleur-Giguere blocked his shot.

"I had an OK game. I felt that I could have scored on a couple of the chances that I got," Okello said. "But overall I thought I did well. I'm proud of my debut."

Ottawa's Jeremy Gagnon-Lapare had four scoring chances in the second half. Bono easily handled one and the other three missed the goal.