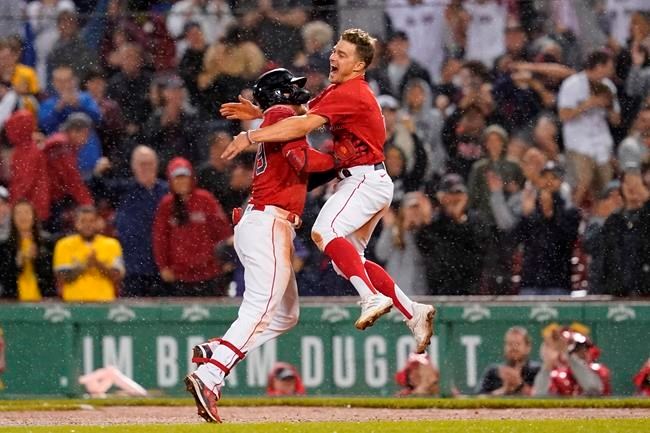 BOSTON (AP) — Alex Verdugo hit a line drive off the Green Monster to drive in the game-winning run in the ninth inning and the Boston Red Sox rallied from a four-run deficit to beat the Toronto Blue Jays 6-5 on Friday night.

Vladimir Guerrero Jr. had three of Toronto’s 16 hits, including his major league-leading 19th homer of the season, to help the Blue Jays open a 5-1 lead in the sixth inning. But the Red Sox scored three in the bottom half and tied it on Christian Arroyo’s towering solo home run onto Lansdowne Street in the eighth.

The Blue Jays loaded the bases in the ninth as rain began to fall — keeping the inning going when first baseman Bobby Dalbec misplayed a foul popup with two outs — before Riley Adams hit a grounder inthe hole and shortstop Marwin Gonzalez barely got the force at second.

Kiké Hernández led off the bottom half with a grounder to short and the throw from shortstop Bo Bichette pulled first baseman Rowdy Tellez off the bag. Tellez tried to put the tag on the runner, but the ball popped out of his glove and rolled away, allowing Hernandez to take second.

Verdugo lined a single off the left-field wall for his third hit, and pinch-runner Danny Santana scored easily for Boston's major league-best 23rd comeback win of the season.

Guerrero smacked a single and a double off the Green Monster before hitting a home run over it -- a 443-foot shot off the DraftKings billboard above the wall in left-center. With a chance to complete the cycle in the eighth, he struck out looking.

Randal Grichuk also had three hits for the Blue Jays, who have lost four of their last five games. Dalbec homered for Boston, which has won two straight.

Guerrero singled in the first, when the Blue Jays had three hits and a walk but managed only one run. He walked in the second, when they added three more hits to make it 3-0. He was stranded on second after his fourth-inning double.

With two out and one on in the sixth, he turned on an 0-2 fastball to make it 5-1. The Toronto pitchers gave most of it back in the bottom half, when Boston cut the deficit to 5-4, before Arroyo tied it.

Blue Jays: Activated 3B Cavan Biggio (neck sprain) from the injured list. He had not played since May 21. Santiago Espinal was optioned to Triple-A to make room.

Red Sox: SS Xander Bogaerts was a late scratch from the lineup because his knee was sore after diving for an Alex Bregman base hit up the middle on Thursday night. The team hopes to have him back by Sunday.