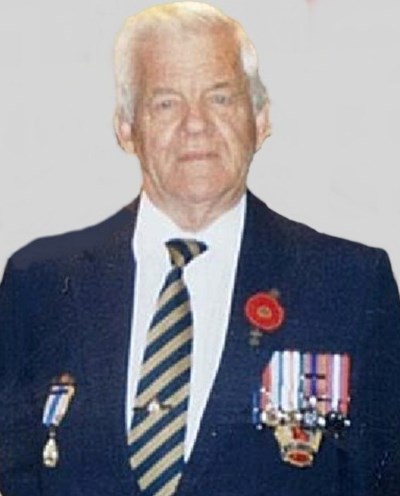 He was predeceased by his son Terry.

Bill is believed to be the last Second World War veteran still living in Banff.  He joined the Canadian Army at the age of 15 years and 9 months, lying about his age, and served in five  theatres of war, coming home in 1946.

He was a carpenter his whole life and was responsible for rebuilding the Banff Legion after it burned to the ground in the early 80's.  He was a member of the Col. Moore Branch of the Royal Canadian Legion since 1979 and was also a member of the Cascade Lodge #5 Masonic Lodge of Banff.

We would like to thank Dr. Smylich and Dr. Baergen in Banff, the homecare workers and all the nurses and wonder workers at St. Matha's Place along with the nurses and staff of  Banff Mineral Springs Hospital. We want to say thank you to  Fr. Dan and Nancy of St. Mary's Parish for their support.  Also all my friends at Mt. Edith House and especially Sue Smythe of the Town of Banff.