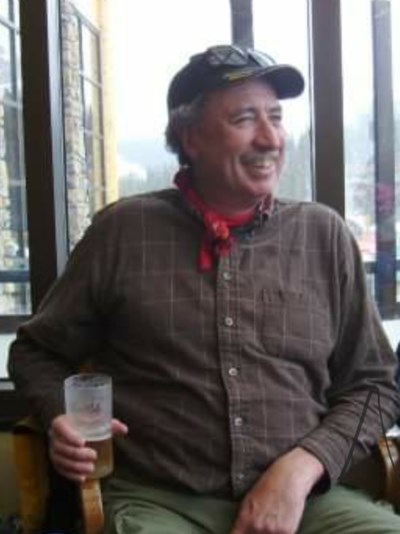 Chris Montgomery has left the building!

Born in Feering, England, May 14th, 1951,  passed away at home on Thursday, November 26th, 2020.  Chris lived a storied life worth several volumes, moving to Canmore by way of England-Portugal-Jersey- Newfoundland and finally landing in Harvey Heights in the early 1970’s, ganging up with a motley crew of eclectic friends that he would cherish throughout his life.  You know who you are.

Entrepreneurial in spirit, Chris explored quite a few ventures before settling on a restaurant locals will remember as The Sherwood House.  During his years there he did his best to foster a welcoming atmosphere and keep patrons plied with the best food his sharp, creative cooking mind could come up with (for a good price, too!).  Many a young person cut their teeth in the service industry working with Chris as he did his best to help guide them through the morass of stress and never-ending kitchen chaos.  He became adept at catching ramekins flung at him from no less than two directions, managing dinner-rush breakups and swearing back at people in at least 7 different languages (8 if you count Schweizerdeutch, which you really ought to since they make the best schnapps and even better friends, that’s the Swiss, not the schnapps).

On top of his absolute deftness in the kitchen, he also worked as a firefighter for the Canmore Fire Department for some 35 years.  Highly respected for his excellent physical fitness and admired for his Adonis-like physique, he helped new recruits and trained veterans alike. He knew hoses and pumps as good as he knew nutmeg and cumin.  He left the department with distinction once his suit no longer fit (it shrunk in the wash we think) in 2010.

Chris wore so many hats throughout his life. He worked Parks Canada Dispatch and we’re told was voted ‘best radio voice’ several years running.  He worked for the Town in various capacities from solid waste to Bylaw (he only gave tickets if you were being an obdurate malefactor, or rude) He was fair and gentle, generous and good natured, humorous and witty, and, as the years weathered him, crusty as a crumpet! His local knowledge was encyclopedic.   He was a lover of Fado and Portuguese wine.  He built his own house with the help of friend Noldi and brother-in-law Arie and it is still there, so can’t have been too bad a job (the crooked corners are due to settlement and the schnapps-did we mention the Swiss are REALLY good friends?).

He established a large brood with his incredible wife Ella. He was a devoted husband and never did take that ring off, even after Ella passed away.  Said he couldn’t find anyone that would ‘come close’.  He was an amazing father, so full of the type of quiet, gentle love that emanates through action and generosity of spirit and not so much through words.  His silence was more often expressed with a twinkle in his eye.  He was a wanderer and an explorer, a lover of all things food and, for a time, a prolific and highly entertaining trip advisor reviewer by the name of ‘Canmore Funky Dude’.  He was a hunter of duck and deer and goose and pheasant.  He was a reader of books and an avid Vinyl Tap listener (thanks Randy, for all the music).    His core was a beautiful mix of subdued mischief and guffaws and farts and sneezes.  His nose would wiggle when he was trying to fib.  He’d most likely have enjoyed your company, and you’d have enjoyed his, immensely.

He was Dad and Uncle and Brother and Friend.  He was Chris.