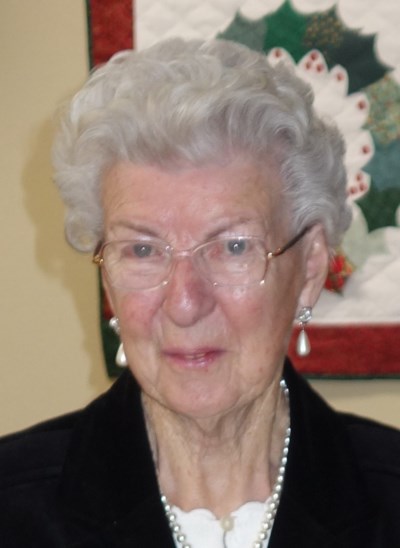 Hilda died peacefully in her sleep at the Canmore Hospital following a short stay at the age of 96 years. She had been diagnosed with ovarian cancer about 6 months previous. Fortunately, this had not deterred her from daily walks (sometimes 2 or 3) with her good friend and companion Lindsay.

Hilda came to Canmore in 1946 to marry (on 4 November 1947) Phillip Bernard Straw whom she had met in England during the war. She joined the family business of Straw’s Cabins & Tea Room on the 1a Highway. Emigrating to the small coal mining town of Canmore from the large industrial city of Manchester, England, she had a lot to learn. Fortunately, close by was a close family friend, Maude “Gramma” Towers, who took Hilda under her wing and began a life long relationship with the extended ‘Towers/Mifflin’ families.

Hilda attended night classes at SAIT in the late 1960’s to learn the craft of sewing. From then on, there was a constant stream of wedding, graduation and special event dresses cycling through the house.  Hilda also acquired the ‘Quilting’ obsession. Over the years she produced hundreds of quilts for friends, relatives and charities.  Many of these quilts remain treasured family keepsakes.

Hilda was a fine cook and ‘Sunday Night Dinner at Hilda’s’ was a treat for many.   For those of you who were fortunate enough to partake in one or more of these - no more need be said.

Hilda’s other great loves were music and travel.  A talented singer, she was an active member of all the choirs and choral groups in Canmore for over 40 yrs.  Much of her travel revolved around national and international conventions of the Rebekahs Organization.  She was a lifelong member, held many offices and made many lifelong friends.

Following her husband's Phil’s death in 1987, she moved to Cougar Creek where she became an avid gardener and enjoyed daily walks along the Creek paths.  When the house became too much for her, she followed the  inspired suggestion from her very good friend Lonny Middleton, and relocated into ‘Origin at Spring Creek’ in January 2018 where she was extremely happy, thanks in no small part to the loving care and attention she received from the wonderful staff there.  Hilda is survived by two sons: Jeff (Debbie) & John (Lois) and three grandsons: Calvin (Kim), Patrick and Sean. She will be lovingly remembered and missed by her many friends and “adopted” nieces and nephews.

Following cremation, it is hoped to have a memorial service sometime in 2021. If family and friends so desire, memorial tributes may be made directly to: Bow Valley Community Cancer Centre, 1100 Hospital Place, Canmore, AB  T1W 1N2.