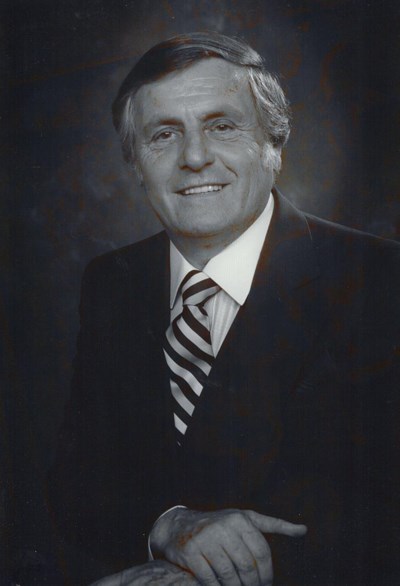 Imo left us to go to some great new ski runs on Easter Sunday.  He had spent most of the morning surrounded by his family and wife Jacqueline when he thought it would be a good time to say goodbye.  He slipped away quietly and peacefully.

Imo was born in Innsbruck, Austria in 1928.  He graduated from University in Vienna with an Agricultural Engineering degree in 1950 and the following year arrived in Canada.  He spent part of that first year working on a cattle ranch in central Alberta and, like all Austrians from the mountains, taught skiing, first at Sunshine and later at Norquay.

In 1954, as a young engineer, he found an excellent job with the Department of Public Works in Banff as manager of the newly created Soils Testing Laboratory.  He and his team were involved in the construction of many of the major projects of the day, from roads and highways, to avalanche snow sheds, to tennis courts for the community.

In 1955 he travelled to Montreal and met and married Jackie.  Their marriage spanned 66 years.  Martin was born in 1957 and the family made their lives in Banff; skiing, playing tennis and spending time in the mountains Imo loved so much.

In 1956, Imo was elected President of the Banff Ski Runners ski club and he initiated a free ski school for Banff children which later became the Kinsmen Ski School.  Over the years, many hundreds of Banff kids took their first formal ski lessons with this group and many went on to race for the Alberta and National Ski Teams.  Imo was very proud of their accomplishments and remained a keen lover of ski racing for the rest of his life.

In 1967, Imo was hired by Senator Donald Cameron and Don Becker to undertake a wonderful new career at the Banff Centre.  In his 27 years at the Banff Centre, Imo was known as a fine gentleman and an excellent leader.  He founded the Conference Division, was Vice President in charge of Operations, and Chairman of the Scholarship Fund where, in particular, he was so proud of the many young people whose lives were greatly enhanced through their study of the arts in Banff.

For the next three decades, he was able to travel across North and South America, to Japan and made many trips to Europe to visit his family and classmates from University.  Trips to Europe always had to include some skiing, too.

In 1994 Imo retired from the Centre, and thus began his new “job” of skiing, hiking or going to the Sally Borden building every day.  In addition to his lifetime love of studying history and sociology, he stayed remarkably fit and strong during those years.  That gave him the strength he needed to spend every day he could with his grandchildren Stephanie, Zander and Marcus.  He loved to ski and hike and chat with those little ones every chance he could.  He loved to make them breakfast every day and then take them to Norquay or out for a hike.

When he was 78 years old, he skied 78 days that season.  That was a good winter.

The effects of a brain tumor caught up with Imo when he was 85 and he moved to his new home at the Mineral Springs and St. Martha’s.  He was loved by everyone there and he loved them.  The care and compassion he received until his final day were magnificent.  There are not enough words to thank everyone there; the doctors, the nurses and the caregivers, for everything they have done for Imo over the years.

Now he has arrived at his next big ski hill where he will be carving big, fast, elegant turns, just like always, with joy in his heart and a smile on his face.